The Bold and the Beautiful Spoilers: ‘Steam’ Reunion Inevitable – Liam Works to Be a Good Man for Steffy, Show He’s Committed Again?

BY Heather Hughes on September 25, 2019 | Comments: one comment
Related : Soap Opera, Spoiler, Television, The Bold and the Beautiful 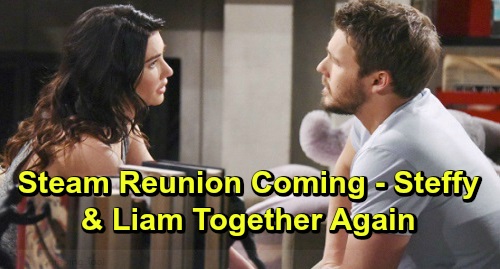 The Bold and the Beautiful (B&B) spoilers reveal that Liam Spencer (Scott Clifton) remains in the doghouse with many fans. He’s bounced between women one too many times – those women being Hope Logan (Annika Noelle) and Steffy Forrester (Jacqueline MacInnes Wood) of course. B&B has always relied on love triangles as their main soap staple, but Liam’s waffling got pretty ridiculous.

Liam can’t keep going back and forth with alienating both fanbases, so The Bold and the Beautiful has settled him down with Hope for now. However, we have to wonder if they picked the right woman for Liam to end up with. Plenty of “Steam” fans have abandoned the pairing due to Liam’s behavior over the years, but is there still a chance for them? Could Liam win you over again as a love interest for Steffy?

Getting back together with Steffy would mean waffling one more time, but it might be worth it to some viewers. Despite their issues, “Steam” has hot chemistry and a complex history together. Both Steffy and Liam have made mistakes, so maybe it’s worth giving this romance another shot. The actors are popular and can sell the love story, which is half the battle.

If Liam ultimately dumps Hope for whatever reason – and since this is a soap, their split has to be coming – Steffy’s bound to be wary of reuniting with her ex. She’d worry that Liam would end up right back with Hope and leave her heartbroken once again. Could Liam put in the work and show Steffy he’s truly committed? Is it possible for Liam to show viewers that, too?

It’s tough to say at this point since The Bold and the Beautiful has caused so much destruction. Nevertheless, the writers are going to do whatever they want anyway. If a “Steam” reunion does happen eventually, longtime fans of the pairing might as well accept it and enjoy it. There’s no harm in that, especially since it seems inevitable!

For now, The Bold and the Beautiful spoilers state that Steffy will do her own thing and focus on healing after the loss of “Phoebe Forrester” aka Beth Spencer (River Davidson and Madeline Valdez). Once Steffy’s ready for love, will B&B put her back with Liam? Is that a terrible idea or could “Steam” still work? We’ll give you updates as other B&B news comes in. Stay tuned to the CBS soap and don’t forget to check CDL often for the latest Bold and the Beautiful spoilers, updates and news.