BY hellodrdavis on October 19, 2019 | Comments: one comment
Related : Soap Opera, Spoiler, Television, The Bold and the Beautiful 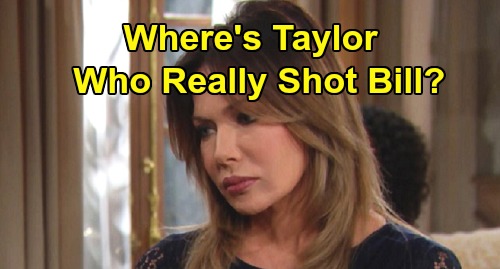 The Bold and the Beautiful (B&B) spoilers tease that things have been getting back to the familiar lately on B&B. Since the culmination of the big Beth Spencer (River Davidson and Madeline Valdez) reveal, there’s been a huge focus on the difficulties in Brooke Forrester (Katherine Kelly Lang) and Ridge Forrester’s (Thorsten Kaye) marriage.

Tensions are also escalating as now Shauna Fulton (Denise Richards) has been brought into the mix as a potential new love interest for Ridge. It’s been taking up a lot of airtime, and some fans have been expressing frustration with the situation.

In addition, tensions are about to heat up once again between Hope Logan (Annika Noelle) and Steffy Forrester (Jacqueline MacInnes Wood) – more familiar territory for viewers. According to The Bold and the Beautiful spoilers, the two women’s argument over their respective losses of Beth as well as over Liam Spencer (Scott Clifton) will escalate and result in lots more of the Steffy-Liam-Hope love triangle. They’ll even argue over Liam’s future, which already has some fans exasperated with the situation, since it’s the same old love triangle that viewers have seen before.

It seems that viewers are interested in some other storyline directions and answers to past questions that have been left unanswered. Of course, it’s fairly common for fans to wish for things that aren’t happening or won’t ultimately happen on the show, and TPTB can’t please everyone, but it does seem that there are three major things that a considerable number of fans are interested in seeing. We’ll discuss each in turn below.

There’s a huge contingent of B&B fans who are wondering where Taylor Hayes (Hunter Tylo) has gone. Given her importance in the Beth/Phoebe adoption storyline, it seems that she’d have been around for the big reveal and implication of Reese Buckingham (Wayne Brady) – after all, it was because of Taylor that Reese decided to abduct Beth and adopt her to Steffy in the first place.

Of course, actor availability and scheduling are always considerations in these matters, but still fans have missed seeing Taylor’s reaction to the big baby switch reveal, as well as her consolation and care for Steffy in the aftermath of Steffy losing “Phoebe.” Fans would love to see Taylor back and part of the current B&B landscape.

As B&B viewers will remember, there was a big deal made of Bill Spencer’s (Don Diamont) shooting last year. Bill was shot in his home, and ultimately it was revealed that Taylor had done it as payback for Bill’s affair with Steffy. And there for a while, there were rumblings of this storyline being revisited.

After all, a big deal was made of Hope not wanting Beth around Taylor because of her “dangerousness,” and how Beth and Steffy wouldn’t be able to be close siblings if Taylor was in the picture and living with Steffy.

But then that all got dropped when Hope and Liam thought that they had lost Beth. The big concern about Taylor’s homicidal tendencies just went away. And then there seemed to be the possibility that the investigation into Bill’s shooting would be reopened and possibly Taylor wasn’t the shooter.

Above All, Viewers Want New Love Interest For Steffy Forrester

But that all went away as well. At any rate, fans have been wondering what ever happened with the issue of who shot Bill, and whether the issue will ever be revisited.

One look at online B&B chatter, and one can clearly see that the #1 request for TPTB is for Steffy to get a new man. While there’s certainly a contingent of “Steam” fans out there who would like to see Steffy and Liam get back together, there’s a huge contingent of fans who desperately want Steffy to move on with someone totally new. When “Leo” (Sam Myerson) asked Steffy out last year and Steffy turned him down, fans about lost it – he seemed like the perfect guy for Steffy.

In fact, there are still rumblings out there from fans who are lobbying for Leo to come back and get together with Steffy. Even Jacqueline MacInnes Wood has hinted in interviews and in online comments that she’d like a new man for Steffy, so when will we see this happen? At some point, Steffy is going to need a love interest, and it just doesn’t seem like there’s anyone currently on canvas who’s available and appropriate for her.

What do you think? What new direction would you like for B&B? Stay tuned to the CBS soap and don’t forget to check CDL often for the latest Bold and the Beautiful spoilers, updates, and news.