BY Olivia Marie on July 16, 2019 | Comments: one comment
Related : Soap Opera, Spoiler, Television, The Bold and the Beautiful 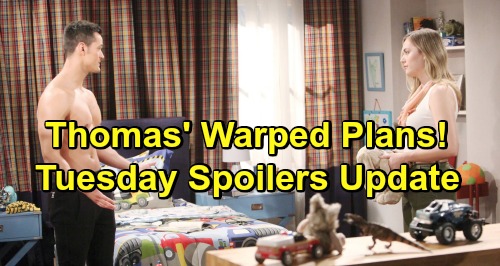 The Bold and the Beautiful (B&B) spoilers update for Tuesday, July 16 tease that news of Hope Logan (Annika Noelle) and Thomas Forrester’s (Matthew Atkinson) wedding plans will stun their loved ones. On Monday’s episode, Hope decided to marry Thomas immediately after Douglas Forrester (Henry Joseph Samiri) thought he saw a monster and had what appeared to be a nightmare.

On Tuesday’s episode, Hope informs Liam Spencer (Scott Clifton) of her wedding plans. She knows that Liam will have trouble accepting that she wants to marry Thomas. The Bold and the Beautiful spoilers say that Liam will relay that he is worried about Hope and he just wants her to be happy.

Of course, Hope will tell him that she is happy and being Douglas’ mother is what she wants. Liam picks up on the fact that Hope doesn’t say that Thomas makes her happy. It appears that her only reason for wanting to marry Thomas is to be Douglas’ mother. Liam will tell her he; s concerned and he wants her to do what is best for her.

Across town, Thomas tells Ridge Forrester (Thorsten Kaye), Brook Logan (Katherine Kelly Lang), and other family members that he and Hope will be getting married immediately. He wants everyone to be part of the celebration.

The Bold and the Beautiful spoilers say that Brooke will be horrified that Hope was the one that suggested they get married immediately. She cannot believe that her daughter would suggest a quickie ceremony. Even so, Thomas advises Brooke it was her idea and she cannot wait to be Douglas’ new stepmother.

Ridge, on the other hand, is excited about the big day. He thinks that it could be the start of a beautiful family for Thomas and Douglas. Brooke can barely contain her disappointment and she vows to try to change Hope’s mind. It’s clear from Ridge’s reaction that he isn’t happy by his wife’s attitude toward his son.

As the big day approaches on B&B, Liam and Brooke work hard to convince Hope that marrying Thomas is a big mistake. She will probably refuse to listen as she is focused on being a mother to Douglas.

Do you think someone will stop the wedding? Don’t forget to come back to CDL later for more The Bold and the Beautiful (B&B ) spoilers, news, and casting updates!