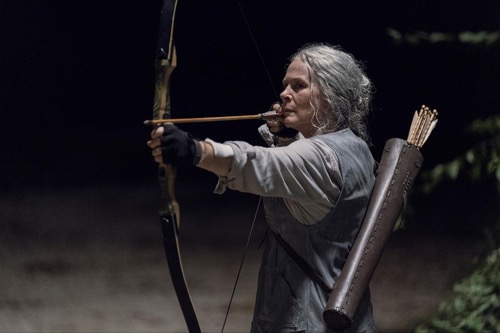 Tonight on AMC our favorite show The Walking Dead airs on an all-new Sunday, November 17, 2019, premiere episode and we have your The Walking Dead recap below. On tonight’s The Walking Dead Season 10 Episode 7 called, “Open Your Eyes,” as per the AMC synopsis, “Carol pushes boundaries that make Daryl uncomfortable. Alpha and Beta have reservations about someone.”

Siddiq wakes up from a bad dream, he is in the infirmary – he makes the rounds, checks on the patients and gives them cold water. There are a lot of people in bad shape, Siddiq keeps hallucinating that he sees Alpha. Siddiq goes back to sleep and feels a hand at his mouth and his chest.

Gabriel tells Carol that she has put them all at risk. Carol says they have to find Alpha’s horde, Daryl agrees. Lydia is there too and Gabriel barely gives her a look.

Back in his house, Daryl takes off his shirt and his back and stomach are full of scars, his dog jumps on him, they lay down on the couch together.

Carol asks Lydia what else she knows about the whisperer, they won’t betray her mom and the ones that watch the horde are loyal, she gave them no choice. Lydia says she hates them, but she knows them too. Carol tells her she has to decide which side she is on. Lydia says her mother twists people, make them think that what they are doing is right.

Siddiq goes to attend to the whisperers wound that they have locked up – the man says to Siddiq that he knows him and Siddiq starts thinking back to another time.

Aaron is with another whisperer, he shows her a picture that his daughter drew for him. He asks her if she has children, and she says no they hold you back – then she says she was an only child and has no siblings.

Carol goes in to see the whisperer and says let’s get started. She uncovers a dish with food and offers it to him, he asks her what does she want. Carol says they are just going to talk, he says he will pass, she gives him the food anyway. The man is clearly starving for real food and really enjoys it – or so we thought, he then spits it all out on Carol’s face and says no.

Carol is upset, she asks the whisperer where is the fort and when he doesn’t answer, she sticks her finger on his wound. Carol then hits him across the face, three times and Daryl tells her it is enough. The whisperer says they are all weak. Daryl takes out a knife, he says he is going to take his fingers first, then both his ears and all his teeth. The whisperer says they lie to themselves, they fight for what, sandwiches and they ignore the truth when it is staring them in the face. He would not betray Alpha, she protects them, loves them and sacrificed her own daughter for them. Carol says she killed Lydia, he whisperer says she did and he is willing to give his life for her.

Carol and Daryl leave the cell, she tells Daryl that they have to show him that Lydia is alive and Alpha is a liar, it is the only way to get him to break. Daryl disagrees and thinks Lydia has already been through too much.

Back to Aaron and the whisperer, he shows her the note from his daughter. Aaron tells her that he had a brother, he loved cars and he still thinks about him every day.

Siddiq goes in to see the whisperer, he is burning up, his pupils are dilated, he dies right in front of them when Daryl and Gabriel walk in. In turns out that Dante killed him by accident, he gave him the wrong medication for pain and swelling.

The whisperer leaves Aaron and is soon attacked by walkers. Alpha is there, she asks him where the man is with the metal arm – she says he has a daughter. Alpha punishes her for not getting information from Aaron, she takes a switch and slaps it over her wrist. Alpha tells her that this Aaron tempts her with his lies.

Daryl offers to clean up the mess, Gabriel says he will help it is not his mess to clean.

Siddiq goes into the bedroom to see Cheryl, he finds Dante out there burying her, she died.

Siddiq is struggling, hallucinating about when he was with Alpha – he jumps in the water, Rosita saves him. Rosita wants to know what has been eating him up for weeks. He says it is like he is still there, just pieces and they are jumbled together. He can’t get it to stop, people are dying. He says the reason why it bothers him so much, he thinks about how much he misses Enid, but then he thinks about how much he failed her. Rosita says it is not his fault, it was Alpha’s fault. People that he loved died right in front of him, now he has to watch it over and over and he did nothing to help them, he just watched. And now, more people. Rosita tells him that he has to pull thought and fight it for everyone else that loves him, like her. He says he still can’t figure out why she is sick. There is no common denominator between everyone that is sick. All of a sudden, he looks at the water and tells her to go home.

Aaron’s whisperer is back, she grabs him and puts a knife to his throat. She asks him how many people does he have, Aaron is trying to grab for his knife when Carol is there with Lydia and tells her to let him go. The whisperer sees Lydia, says no and runs away. Carol tells Lydia that her mother told her people that she killed her. Lydia tells Carol that she used her, she says then that she chooses a side, hers. Carol tries to go after her and Lydia hits her. Aaron tells Carol to hold back, they could be watching. Lydia is walking through the woods, the whisperer has taken off her mask and she is crying.

Dante goes to see Siddiq and says he is sorry, with Eugene gone he was supposed to help with the water and he wasn’t pulling his weight. Siddiq says it is all his fault. Dante says it is all their fault and when one is suffering, they are there to help. Dante puts his hand on Siddiq’s shoulder and tells him it is going to be ok. All of a sudden, Siddiq and Dante get into a fight. Dante is trying to kill Siddiq. Dante realizes that Siddiq realizes he is a Whisperer spy.  Dante kills Siddiq!