The Young and the Restless Spoilers: Abby Calls Off Engagement, Hooks Up with Rey – Ultimate Blow to Cheating Mia and Arturo? 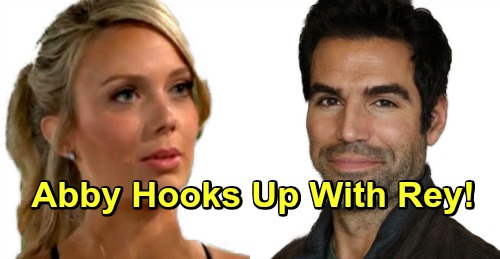 The Young and the Restless (Y&R) spoilers tease that Abby Newman (Melissa Ordway) will get some news that leaves her enraged. Since Mia Rosales (Noemi Gonzalez) is holding the sex secret over Arturo Rosales’ (Jason Canela) head, he’ll opt to just confess and be done with it. Even if Arturo could help Mia get back together with Rey Rosales (Jordi Vilasuso), he won’t like that she’s got so much power. Of course since Jason Canela is officially out at Y&R, his storyline is wrapping up soon.

Arturo will decide to take that power away by confessing, but the aftermath will far worse than he could’ve imagined. Abby already hated Mia and worried she would lure Arturo to her bed again. The Young and the Restless spoilers say she’ll lash out when she realizes Arturo’s promises meant nothing.

Arturo will promise that Abby is the one he wants, but how can she possibly trust him? As long is Mia is around, Abby will always have to wonder what’s going on behind her back. She won’t be on board for a lifetime of that. It appears Abby will call off the engagement, so what’s next for her romantically? She could probably use a no-strings-attached palate cleanser right about now.

Abby really needs to find a hot distraction who can numb her pain, even just for one night. If she can infuriate Arturo and Mia in the process, that’d be even better. Abby once ridiculed Mia for “panting like a dog in heat” as she went brother to brother. Maybe it’s time for Abby to take a page out of Mia’s playbook. Should Abby sleep with Rey to get back at Mia and Arturo?

Rey wants to be with Sharon Newman (Sharon Case), but there’s no guarantee things will work out. If Rey’s efforts to win Sharon over fail or Nick Newman (Joshua Morrow) wins her back instead, the detective may end up brokenhearted for a while. After Rey hears about Mia and Arturo’s latest betrayal, he could be looking for a little revenge as well!

Of course, this move could backfire on Rey’s end. If he still wants a shot with Sharon someday, he’d lose even more points by sleeping with Abby. Y&R fans know Abby’s the one who broke up Sharon’s relationship with Scott Grainger (Daniel Hall), so there are old wounds here.

Still, if it’s a fling driven by sadness, vengeance and maybe even drunkenness, that might not be so bad. If they’re single, they can do whatever they want anyway! Rey and Abby could even become a real couple depending on their chemistry. Regardless, The Young and the Restless spoilers say Abby will find a way to deliver some harsh blows to both Mia and Arturo.

Would you like to see Abby hook up with Rey? Would that be fitting after what Arturo and Mia have put them through? We’ll give you updates as other Y&R details emerge. Stay tuned to the CBS soap and don’t forget to check CDL often for the latest Young and the Restless spoilers, updates and news.