The Young and the Restless Spoilers: Adam and Nick’s Brutal Custody Battle – Who Should Get Christian?

BY Heather Hughes on May 11, 2019 | Comments: Leave Comments
Related : Soap Opera, Spoiler, Television, The Young and the Restless 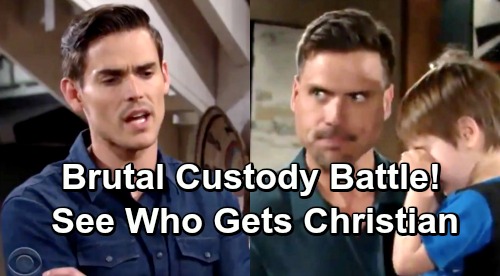 The Young and the Restless (Y&R) spoilers tease that a fierce war is on the way. Y&R fans know Adam Newman (Mark Grossman) is Christian Newman’s (Jude and Ozzy McGuigen) biological father, but Nick Newman (Joshua Morrow) has been raising him as his own. Nick loves Christian and wants what’s best for him, so he’s already getting nervous about what’s in store.

On Friday, Sharon Newman (Sharon Case) realizes Adam tossed out all the pics Victor Newman (Eric Braeden) provided of his family – all except the one of Christian. It’s clear that Adam already has a soft spot for the kid. The Young and the Restless spoilers say Adam will push for a custody battle eventually. He’ll want his boy back, so Nick will have to fight for Christian and hope it pays off.

Naturally, Victor will get caught in the middle. It seems likely that he’ll end up siding with Adam on this one. That could fuel the feud between Victor and Nick in the months ahead. Things have died down lately, but Adam’s return and push for custody will rev the tension back up. His presence alone will cause total chaos for the Newmans and everyone connected to them.

Of course, we have to look at both sides of the situation and think of Christian’s well-being, too. Which brother should get custody? We can understand why Adam would want his son, especially since he has amnesia. Adam has no reason to respect Nick’s wishes or even trust that he’s been a good dad to his kid. It’s easy to see why Adam would want to step up and be a father to Christian himself.

However, Y&R fans know Nick has indeed been a solid father figure. We’ve seen Nick help Christian play with his cars and take him to the pumpkin patch. We’ve heard Nick talk to Christian about dinosaurs and do all the little things that make him a loving dad. Christian knows Nick as his father, so ripping them apart would be cruel.

Nick already went through custody drama back when Victor went after Christian. He’ll feel like he’s reliving a nightmare when Adam comes for Christian this time. The Young and the Restless spoilers say the Newmans will rally around Nick in support, but Adam won’t care. He’ll be determined to raise Christian and he’ll do whatever he can to make that happen.

Are you rooting for Nick to keep custody or do you think Adam deserves his son? We’ll give you updates as other Y&R news comes in. Stay tuned to the CBS soap and don’t forget to check CDL often for the latest Young and the Restless spoilers, updates, and news.