The Young and the Restless Spoilers: Adam Newman’s Return Worth the Wait – Michael Muhney Is Money For Y&R

BY Sean O'Brien on February 18, 2019 | Comments: one comment
Related : Soap Opera, Spoiler, Television, The Young and the Restless 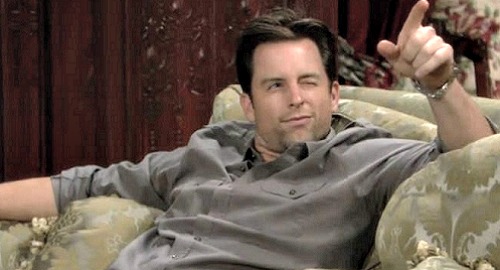 The Young and the Restless spoilers tease that the return of Adam Newman, in the specific form of Michael Muhney, will be worth the wait. Viewer reaction would spike the ratings in the short-term, without question.

That momentum would make it more likely that the audience size would be sustained thereafter, thus resulting in an increase in advertising rates. But if Muhney doesn’t become Adam again, then nothing more than a one-day interest pique would be realized.

Justin Hartley must be mentioned right now, as all who would counter the above conjecture can rightly counter with facts. Y&R did interview Muhney for rehire in the summer of 2014, but opted to hire Hartley instead. That choice, while not initially supported, did result in success.

Y&R’s audience, by and large, came to appreciate Hartley’s terrific acting chops. The actor’s self-deprecating use of social media and his undeniably great work as Adam through 2016 wasn’t denied, in the end, by anyone, including those who didn’t like his hire at first. That outcome was rather remarkable. So, anyone could claim that Y&R could again realize that type of success if another non-Muhney is hired.

The risk is different this time if Y&R again recasts Adam Newman with a completely new actor. The show’s ratings are somewhat less, meaning hundreds of thousands fewer viewers per day, then they were when Hartley departed more than two years ago.

However, the show is still the top-rated daytime steamer, garnering approximately five and a half million viewers per day in the United States and Canada combined. That’s why the show is still on the air, it’s a money-maker.

Would hardcore The Young and the Restless fans exit the show in droves if Muhney isn’t rehired? No. But Muhney-specific fans wouldn’t return, which could be calculated as approximately one-hundred thousand, based upon his social media followers.

Also, more casual fans also wouldn’t be compelled, beyond the one-day pop referenced earlier. Sure, this isn’t an exact science, but the number’s point is reasonable.

So, it’s fair to believe that Y&R wouldn’t start the latest Adam Newman recast debut with somewhere around one-quarter to one-half of a million more viewers if a new actor plays Adam. Instead, TPTB would be hoping that the alternative actor would do as well as Hartley and that ratings are at least sustained, if not increased.

Therefore, why not bring Michael Muhney back?

Yes, there was a group of assailants who denigrated him, some of his colleagues, and Y&R itself when the actor was stunningly let go in December 2014. But four-plus years have passed since then.

Muhney has long since and repeatedly demonstrated true contrition for his admitted overly assertive on-set behavior and Y&R interviewed him for rehire, proving nothing that violated any rule, or law had actually taken place which forced his removal.

The arguably most passionate fans in all of entertainment want Muhney back and many within the general hardcore audience of more than four million supported him from 2009-2014.

Redemption can be two-fold, as Michael Muhney and Adam Newman return to Y&R and Genoa City respectively? Here’s hoping so. CDL is a leading source for everything linked to The Young and the Restless. Check back regularly for Y&R spoilers and news!