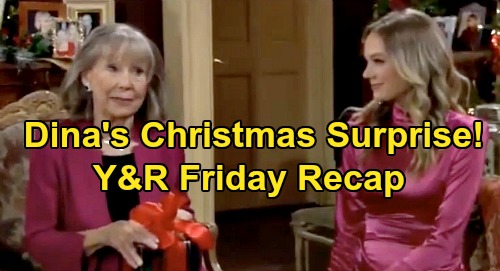 The Young and the Restless (Y&R) spoilers recap for Friday, December 27, teases that Ashley Abbott (Eileen Davidson) will be back for a fun holiday episode. She’ll catch up with Traci Abbott (Beth Maitland) at the Abbott mansion, where they’ll discuss Dina Mergeron (Marla Adams). They would love to have Dina with them at Society later, but they’re in agreement about a restaurant being too much for her.

Talk will turn to Ashley’s chat with Theo Vanderway (Tyler Johnson) and the conflict that’s been going on with Kyle Abbott (Michael Mealor). They’ll end up sharing a laugh over the feuding cousins, but Kyle probably wouldn’t be so amused! At Society, Lola will mention that Theo has other plans and won’t be attending the party. Kyle will be curious how Lola found out, so she’ll confess that they’ve been texting. She’ll want Kyle to cut Theo a little slack since he’s by himself on Christmas.

At home, The Young and the Restless spoilers say Billy Abbott (Jason Thompson) will be eager to wrap up a deal for work. He’ll text Amanda Sinclair (Mishael Morgan) to let her know he’ll be in town overnight. Suddenly, Jack Abbott (Peter Bergman) will appear and insist on Billy attending the family shindig. Despite Billy’s attempts to wiggle out of it, Jack will be adamant that Billy’s coming.

After Billy relents, Amanda will text him about eating some Thai food with her. Billy will call Victoria to leave her a voicemail before texting Amanda back that they can play cards later. At the coffeehouse, Michael Baldwin (Christian LeBlanc) and Lauren Baldwin (Tracey E. Bregman) will talk about joining the Abbotts for their get-together. Lauren just won’t be in the holiday spirit without Fenmore “Fen” Baldwin (Zach Tinker) around.

After Fen calls, Y&R spoilers say they’ll turn around to see that he’s standing nearby. After hugs are exchanged and Fen’s given a warm welcome, he’ll talk about moving in a halfway house. Fen will open up about his difficult relapse and hope his parents can forgive him for letting them down. Michael and Lauren will assure Fen they’ve proud of him for committing to his recovery.

Back at Society, Abby Newman (Melissa Ordway) will bring Ashley up to speed on pushing Phyllis Summers (Michelle Stafford) out of the Grand Phoenix. She’ll admit “Chance” Chancellor (Donny Boax) helped her pull it off. Traci will also be there when Jack shows up and reveals that Billy’s coming, too.

Kyle will pipe up that he can reach out to Theo if Jack wants, but Jack won’t think it’s good idea to pressure him. As for Ashley, she’ll get Jack’s assurance that she’s not the reason Billy left Jabot. Next, the Baldwins will arrive and create some more opportunities to mingle. Fen will congratulate Kyle and Lola on their marriage while Michael speaks with Jack and Ashley chats with Lauren.

Outside, Billy will gaze in at the crowd briefly before joining the others. He’ll apologize for being late and will eventually give Fen props for rehab completion. Fen will suggest he just couldn’t trust himself anymore, which will appear to hit home for Billy. After Jack’s toast, Billy will finish up his deal for work before receiving another text from Amanda. He’ll opt to head back to his place, where he’ll call Victoria. After looking at Amanda’s text pensively, Billy will play solitaire alone.

Back with Abby, she’ll talk about Chance being out of town for the holidays. Abby will confess to Ashley that she likes him. Over with Fen, he’ll have a compass as a Christmas present for Michael and Lauren. Fen will insist they’re always there to guide him and praise them for saving his life.

At their apartment, Kyle and Lola will tease each other about the gift catastrophes of the past before exchanging new ones. After Kyle hands over a book of restaurants and a voucher to any place Lola fancies, she’ll give him a framed picture of the stars in Idaho – including the star Kyle bought for her. Lola will point out that she arranged for them to stay in a cabin there.

At the Abbott mansion again, Dina will be on hand to check out the Christmas tree and open gifts. After Jack reads ‘Twas the Night Before Christmas, Traci will begin singing O Come, All Ye Faithful. Dina will surprise everyone by recalling the lyrics, so she’ll start singing as well. Jack, Abby and Ashley will round things out with their own voices, so this will definitely be a sweet family moment.