BY hellodrdavis on October 3, 2019 | Comments: one comment
Related : Soap Opera, Spoiler, Television, The Young and the Restless 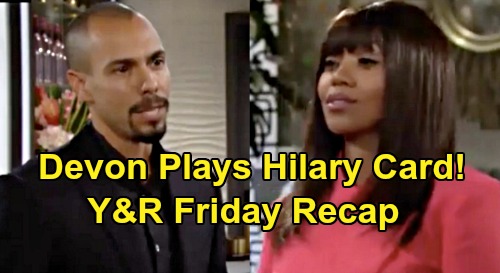 The Young and the Restless spoilers recap for Friday, October 4, tease that Michael Baldwin (Christian LeBlanc) will chat with Victor Newman (Eric Braeden) ahead of the Newman family dinner. He’ll wonder whether Victor is keeping tabs on Adam Newman (Mark Grossman), but Victor won’t confirm nor deny.

Meanwhile, at Society, Lola Abbott (Sasha Calle) and Mariah Copeland (Camryn Grimes) will do a little not-so-subtle matchmaking between Rey Rosales (Jordi Vilasuso) and Sharon Newman (Sharon Case). Sharon and Rey will later end up talking and things will turn a bit romantic. They’ll decide that it’s officially a date, and Rey will walk Sharon out.

Across town, Devon Hamilton (Bryton James) will plan to meet later with Amanda Sinclair (Mishael Morgan) to try out a new, friendlier approach, but Elena Dawson (Brytni Sarpy) will balk at that idea. Still, Devon will go see Amanda, and he’ll say that they got off on the wrong foot before, and that they should work together to get all of his questions answered.

Amanda will claim that she’s not trying to manipulate Devon, and he’ll try to disarm her a bit by telling her about Hilary Hamilton (Mishael Morgan). Devon will then float the idea that she might be getting played by someone posing as Chance Chancellor (John Driscoll). But Amanda will say that he’ll soon have to face the fact that he’s living off of someone else’s money.

Next, the Newman family dinner will commence. Before things kick off, Billy Abbott (Jason Thompson) will do his share of griping about how Adam got away, and he and Victor will bicker. Nate Hastings (Sean Dominic) will be present as Abby Newman’s (Melissa Ordway) guest, and he’ll give Victor a check-up before announcing that Victor’s in good shape.

Victor will then request that the family voice their concerns with him, to get everything out in the open. Summer Newman (Hunter King) won’t be present to offer her complaints, but Victoria Newman (Amelia Heinle) will mention the damage that’s been done to the Newman family’s reputation as a result of the ruse. Billy will add that the ruse hurt everyone but Adam.

Victor will disagree with that sentiment, and he’ll note that he thinks Adam has paid a big price, since he’s been humiliated and distanced from the family. Nobody will really appreciate that point of view, and everyone will leave before dinner, cutting the night short. Nikki Newman (Melody Thomas Scott) will comfort Victor afterwards, remarking that his other children (besides Adam) need his support.

Meanwhile, Cane Ashby (Daniel Goddard) will be on a search for answers about Chance Chancellor (John Driscoll). He’ll try to get information from Nick Newman (Joshua Morrow) about Adam’s whereabouts, and whether Adam and Chance have reconnected, but Nick will refuse to talk about Adam. Cane will end up getting Riza Thompson’s (Tina Casciani) name from Rey, which will be something to go on.

Later, Cane will show up at Adam’s penthouse and encounter Phyllis and Summer, who will be in the middle of an argument over Adam. Cane will ask Phyllis to let him know if she hears from Adam. Phyllis will find that very interesting. She’ll then try to call Adam but realize that Michael is now in possession of Adam’s old phone.

Phyllis will later spot Cane at Crimson Lights trying to glean information about Adam’s possible whereabouts from Nate, who will later tell Elena that he’s hates the way the Newmans operate. Finally, Phyllis will overhear Cane making travel arrangements – he’s planning on flying to Las Vegas, something that will pique Phyllis’ interest.