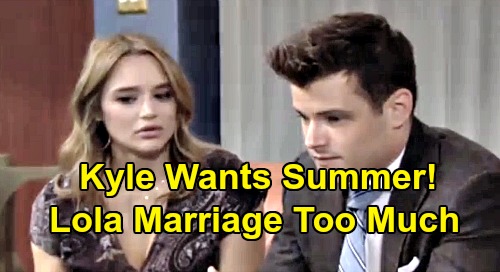 The Young and the Restless spoilers tease that Kyle Abbott (Michael Mealor) seems to have a problem on his hands. As Y&R viewers know, he and Lola Abbott (Sasha Calle) recently had a pregnancy scare, and Kyle’s response to the whole thing was pretty telling. He told Lola that he felt the same way she did about it – relieved to find out the pregnancy test was negative but still disappointed in a way. But the look on his face when he subsequently embraced Lola told a very different story.

In fact, Kyle looked absolutely terrified by the prospect of becoming a dad, and that led us to wonder if perhaps things have just moved too fast for the couple. Of course, it could be that Kyle just was unprepared for the possibility of having children – after all, he and Lola only recently got married and it seems that they had planned for a little time to themselves before they even talked about having a family. That’s totally understandable.

But there have been other things going on with Kyle as well – things that lead us to think that this marriage to Lola might be a bit much for him. When he’s with Summer Newman (Hunter King), he tends to look miserable when he discusses Lola and his marriage. This was especially true when he was discussing his house-hunt with Summer at Jabot.

Y&R viewers will remember that Kyle was looking for houses in suitable school districts, and he seemed really overwhelmed at the idea of having a family and making such big steps in his life at this time. Summer was, of course, shocked by the idea of Kyle and Lola starting a family so soon, but Kyle didn’t seem happy about the idea in his own right.

In fact, Kyle seemed to have more fun looking at houses with Summer than he did looking at them with Lola later that evening. Kyle and Summer just seem to be on the same page when it comes to their wants and needs in houses – which may seem like a small thing, but we think it signifies something greater. Kyle and Summer share similar backgrounds, and they find comfort in having things be the way they were when they were growing up. Kyle and Lola don’t share that similarity, and it can make things like agreeing on a house tough.

At any rate, it seems like Kyle just isn’t as into his marriage with Lola as he would be if the two shared more in common. It might not end up being a major, lasting issue for the couple – it could just be something they need to work through for the time being. But these signs that TPTB are throwing out there about “Kola’s” marriage could signify bigger problems, especially if Kyle starts to regret dumping Summer.

Y&R spoilers indicate that Kyle will experience a spooky alternate reality this Halloween, where he imagines or perhaps dreams about what life would be like if he had ended up with Summer, and not Lola. That sure sounds like Kyle may be having regrets about his marriage to Lola. We’ll see what happens, but he may be heading into dangerous territory if he starts giving the matter too much thought and wondering “what if.”

What do you think? Are Kyle and Lola destined to be together for the long run? Or will Kyle eventually realize he made a mistake by dumping Summer and marrying Lola? Stay tuned to the CBS soap and don’t forget to check CDL often for the latest Young and the Restless spoilers, updates, and news.