BY Heather Hughes on November 28, 2019 | Comments: one comment
Related : Soap Opera, Spoiler, Television, The Young and the Restless 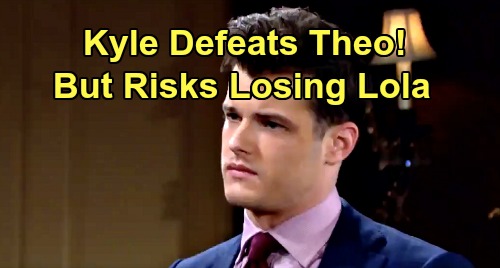 The Young and the Restless (Y&R) spoilers tease that Kyle Abbott (Michael Mealor) could resort to some sneaky behavior. Y&R fans know he doesn’t have much faith in his cousin. Kyle vowed to give Theo Vanderway (Tyler Johnson) a chance, but it’s difficult when the guy gets on his last nerve.

To be fair, Theo spent months trying to do just that. He existed to make Kyle miserable, so it’s no wonder Kyle’s having trouble accepting this redemption idea. Plenty of viewers are struggling to accept it, too! Characters can certainly turn things around for the better and deserve opportunities to prove themselves. However, that’s kind of the point here. They indeed have to prove themselves.

Instead, The Young and the Restless seemingly expected us to forget all about the old Theo. We watched him be a disgusting sleazeball for months, so lots of viewers are in that same boat with Kyle. It’s hard to see Theo in a new light just yet. So many characters are inexplicably propping Theo at this point, which can be pretty irritating.

Of course, Y&R writers are likely hoping we’ll all feel sorry for Theo after Kyle’s upcoming move. Kyle doesn’t think Theo has the skillset to back up his flashy presentation. In the episode airing November 28, Kyle gripes about Theo acting like he’s some kind of marketing genius. Lola Abbott (Sasha Calle) suggests that if Theo can’t keep up at Jabot, they’ll all know soon enough.

Will that give Kyle an idea? Could he resort to sabotage in an attempt to push Theo out of the picture? Even if Kyle’s willing to give Theo some form of a chance, that doesn’t mean he wants to work with him. Kyle undoubtedly feels like it’s bad enough that Theo’s part of the family now. He doesn’t want Theo invading every area of his life, so this would be an easy way to reduce the amount of time he has to be around him.

Since Kyle is above Theo at Jabot, it’d be pretty easy to use a few tricks and manipulate the situation. Kyle could make it look like Theo choked under the pressure and just wasn’t up to this challenge. He might convince Jack Abbott (Peter Bergman) that it was a mistake to hire Theo and encourage him to gently nudge Theo out the door.

During the week of December 9-13, Kyle will celebrate a victory. He’ll toast to his own success, so what will be his big win? It’s possible a sabotage plan will pay off – at least in the short-term. Kyle could be in major trouble with Jack, Lola, Summer Newman (Hunter King) and even Theo himself later!