The Young and the Restless Spoilers: Mia Horrified as Marriage Crumbles – Real Pregnancy a Must, Finds Surprising Sperm Donor

BY Heather Hughes on March 4, 2019 | Comments: one comment
Related : Soap Opera, Spoiler, Television, The Young and the Restless 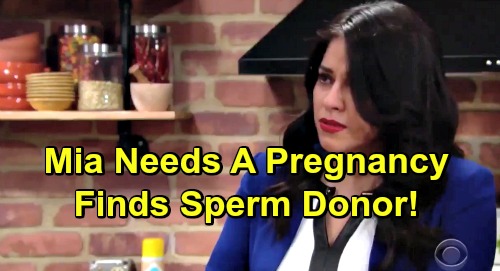 The Young and the Restless (Y&R) spoilers tease that Mia Rosales (Noemi Gonzalez) will hope to stand by her man. She’d better since Rey Rosales (Jordi Vilasuso) cut her the break of a lifetime! Mia went after Abby Newman (Melissa Ordway), but attacked Lola Rosales (Sasha Calle) by mistake. Lola will thankfully recover, but Mia nearly led to the death of Rey and Arturo Rosales’ (Jason Canela) sister.

That’s a huge deal, but so is this baby Mia’s pretending to carry. Her fake bun in the oven will keep her out of jail for the time being, so she’ll end up in court to support Rey. Y&R spoilers say Rey will be called to testify as part of Sharon Newman’s (Sharon Case) defense.

Brittany Hodges (Lauren Woodland) will put Rey on the stand and ask a few questions about the night Sharon confessed. She’ll point out that it happened to be Valentine’s Day and wonder what a married man was doing in Sharon’s home. Rey probably won’t confess that Mia called out Arturo’s name during sex and caused him to bolt, but he will make another confession.

Brittany will pressure Rey to admit he declared his love for Sharon. He might offer a vague excuse about an earlier fight with Mia or he could choose to leave her out of this. Regardless, The Young and the Restless spoilers say Mia will be horrified. She was already jealous of Rey and Sharon’s connection, but this courtroom admission will truly leave her reeling.

Mia should grow curious when Brittany works her next legal angle. As Sharon’s attorney, Brittany has to do whatever it takes to help her client. She’ll argue that Rey only professed his love to emotionally manipulate Sharon and convince her to come clean.

Will Rey back up that idea for Sharon’s sake? No matter what Rey claims in court, Mia should want the truth behind closed doors. She’ll confront Rey about his love confession and wonder if it’s Sharon he really wants. Mia will be even more dismayed when Rey reveals that he does. He’ll insist that he can’t be with Mia anymore and point to Sharon as the reason why.

Rey will insist that he’s indeed in love with Sharon, but Mia may snap that Sharon could be going to prison. She may not see the point in breaking things off. Rey could argue that either way, he doesn’t want Mia. Of course, Mia should turn on the waterworks and push Rey to think of the baby – the fake baby, that is. She may remind Rey that he wanted to give his child a loving home with a present father.

Mia could gripe about sharing custody and contend that it’ll be better for the kid if they stick together. It’s easy to imagine Mia guilt-tripping Rey into a change of heart. An agitated Rey may agree that their marriage will remain intact, but ONLY because Mia is pregnant. He might suggest that Mia will just have to live with the fact that he doesn’t love her.

You can bet Mia will be more nervous than ever soon. Since there’s no baby at all, Mia should realize she needs to get pregnant for real – and fast! If she doesn’t, Mia could lose Rey and her freedom. Will Mia seek out a sperm donor or perhaps try to get Arturo Rosales (Jason Canela) in the sack? Regardless, Mia needs to get the ball rolling or her due date could raise red flags.