The Young and the Restless Spoilers: Miscarriage Ahead for Pregnant Lola – Tough Loss Ends Kola, Pushes Kyle Back to Summer?

BY Heather Hughes on October 14, 2019 | Comments: one comment
Related : Soap Opera, Spoiler, Television, The Young and the Restless 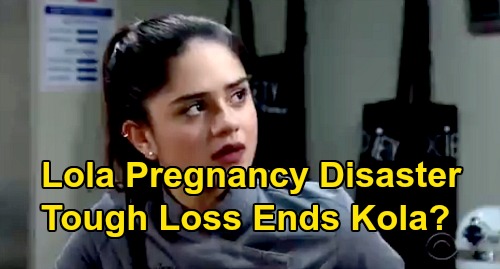 The Young and the Restless (Y&R) spoilers tease that Lola Abbott (Sasha Calle) and Kyle Abbott (Michael Mealor) will face struggles in their marriage. Since he arrived in Genoa City, Theo Vanderway’s (Tyler Johnson) mostly served as a secret threat for Kyle to battle. We can’t forget that Kyle’s trying to keep what happened in New York under wraps.

However, Lola is starting to see the potential for change in Theo. Kyle, on the other hand, feels Theo’s incapable of turning things around for the better. On the episode airing October 15, Kyle and Lola have a huge fight after Lola defends Theo’s good intentions. Lola gets a fierce warning to stay away from Theo, so it’s clear that Kyle will be riled up about his former friend’s manipulation.

Of course, it won’t take long for “Kola” to patch things up. The Young and the Restless spoilers say Lola’s pregnancy scare is coming up later this week, so that’s bound to bring them together again. It’ll serve as a reminder of what’s really important and get the possible parents-to-be excited about what the future holds.

What happens if Lola indeed has a bun in the oven? That may not be a good thing with all this Theo drama lingering. Kyle and Lola will put their conflict aside for now, but how long until it revs up again? It’s clear that Y&R is inching Kyle in Summer Newman’s (Hunter King) direction. They’re framing Summer as someone who understands him through their similar upbringings and complicated families.

With that in mind, something will have to sever Kyle and Lola’s bond down the road. The New York secret doesn’t seem like enough. Kyle was party boy and made a mistake, but he’s moved on from that phase of his life. Zoe Hardisty (Anna Grace Barlow) got payback anyway, so it’ll be kind of lame if that secret ends “Kola.” We need something bigger to drive them apart.

If Lola’s truly pregnant, a miscarriage might be a solid way to go. It’s easy to imagine Theo finally dropping the NYC bomb – either inadvertently or under the guise of “Lola needs to know.” Lola could easily lash out at Kyle and potentially suffer pain that sends her to the hospital. That could bring some finger-pointing for Kyle and Theo. Between the blame game and the baby loss “Kola” might suffer, that’d certainly be a great strategy to break up Lola and Kyle.