The Young and the Restless Spoilers: Phyllis Uncovers Vegas Secret, But Falls for Chance – Chooses Love Over Adam Revenge?

BY Heather Hughes on December 27, 2019 | Comments: one comment
Related : Soap Opera, Spoiler, Television, The Young and the Restless 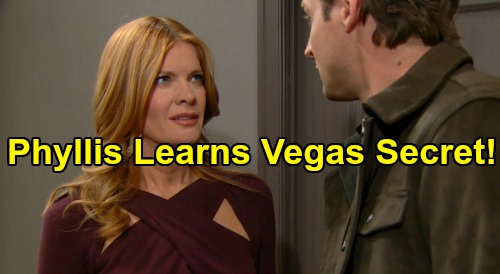 The Young and the Restless (Y&R) spoilers tease that Phyllis Summers (Michelle Stafford) could find herself in a tricky situation. Y&R fans know Phyllis was furious after Adam Newman (Mark Grossman) urged her to seduce Nick Newman (Joshua Morrow). She was disgusted and felt completely disrespected, so it only intensified her desire to find out what exactly went down in Las Vegas.

Of course, Phyllis was also fired by Abby Newman (Melissa Ordway) and would undoubtedly like a good dose of payback. She assured Nick she wasn’t focused on revenge, but Phyllis is ALWAYS focused on revenge! There’s never a time when Phyllis isn’t cooking up a plot or two against her enemies.

Phyllis may think she can kill two birds with one stone. By flirting with “Chance” Chancellor (Donny Boaz) and getting him to lower his guard, Phyllis may hope to destroy Abby’s new romance and score this secret she desires. She already knows a few tidbits about Vegas, but she needs the full scoop if she wants to blackmail Adam.

However, Phyllis could find herself unexpectedly falling for Chance – and he just might do the same. The Young and the Restless spoilers say Abby will be pretty busy in the months ahead. She’ll have a lot on her plate, especially after another crisis hits at the Grand Phoenix. That place is constantly crawling with drama!

Phyllis will have an opportunity to pull Chance closer if she plays her cards right. Chance insisted he knows Phyllis’ kind and wants nothing to do with her, but there’s a thin line between love and hate. Sparks could certainly start flying, so Phyllis will have to decide what she’s going to do next.

The Young and the Restless spoilers say Phyllis won’t stop until she gets what she wants, so she may eventually learn this Vegas secret. Will finding out the truth change her mind about revealing it? Phyllis may determine that it would blow up Chance’s world far more than Adam’s – and it would based on the clues we’ve heard so far. She may have grown to care about Chance by then, which could convince Phyllis to keep quiet.

Meanwhile, there could be some walls going up between Chance and Abby. Will Phyllis wreck Abby’s new relationship before it ever really gets off the ground? The Young and the Restless spoilers say Phyllis could be poised for some complicated victories, so don’t miss what’s in store. We’ll give you updates as other Y&R news comes in. Stick with the CBS soap and don’t forget to check CDL often for the latest Young and the Restless spoilers, updates and news.