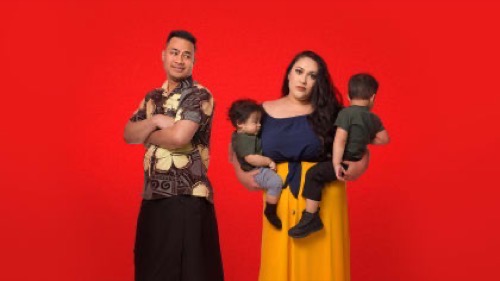 Kalani and Asuelu look back on the episode where he saw the ghost by the bathroom. Kalani this Samoa’s are big on God, so they believe in ghosts. It’s a year since Asuelu saw his family, his mother greets him by giving him an awkward and long kiss on the mouth. Asuelu says there is nothing wrong with it, this is what they do in their relationship. On Twitter, someone says that Asuelu got more action with his mom than she did all quarantine.

Another one from Twitter makes fun of Asuelu’s mother and sister that all they are thinking about is how much money he is going to give them. Asuelu says that it is inappropriate for Kalani to say he was making out with his mom when she kissed him on the side of the face.

Colt and his mother, Daniele, and his cat Cookie Dough are getting ready to watch the episode. Vanessa was babysitting the cats, which means that she is still in Colt’s life and Jess couldn’t handle that. Someone on Twitter says that Jess pulled a Larissa by getting Vanessa’s phone number. We see Jess storm into the hotel to go speak to Colt, while he is pacing and looks like he has a headache.

Once in the room, Jess throws her shoes at Colt. Colt says that Jess scared him, she came at him so fast. On Instagram, someone says “when your delivery guy forgets the ranch.” Jess keeps shoving her cell phone in Colt’s face, he remains calm. She yells that Vanessa is speaking to him every day. Debbie says getting violent is wrong. Jess laughs at the whole thing, she says Colt deserves it.

Someone on social media says that Colt looked like he got shoved by Hulk. Colt says Jess had the strength of ten Hulks. In Jess’s parting words during that encounter, as she was leaving Colt and he was begging her to talk, she said she is going to go have fun and mess with some other man on her last night in Brazil. Colt admits that he didn’t love Jess, he would just through around I Love You’s to anyone who would listen.

Elizabeth and Andrei are getting ready to watch the episode when Andrei, Elizabeth, Chuck, and Charlie hang out with Andrei’s friends. The last dinner didn’t go well, so Andrei was hoping this one would go well. Charlie and Chuck start probing with questions and Andrei doesn’t like it and his friends are not going to talk. Chuck is surprised that Andrei won’t answer and think he is hiding something.

Someone on Twitter asks where all this energy from Chuck and Charlie before Lippy married Andrei 2 years ago? This vow renewal in Moldova doesn’t erase the fact. Then Charlie asks about Ireland, the pillow talkers say it is none of Charlie’s business. This is where it starts to get tense. Andrei says her family should have done this interrogation three years ago before they got married and had a baby. Alexei says that Libby is stuck in the middle and there is no win for her. Libby says there was zero chance to interject, she was not going to yell at them. Andrei says that it was very hard to retain from punching Charlie, his face is so punchable. Libby is getting really uncomfortable watching this episode. We see Andrei and Charlie almost go to blows. Someone on Twitter says that the only person at the table who thought Charlie could take Andrei was Charlie, even his dad had no faith.

On to Syngin and Tania, when they go to South Africa because Syngin’s brother had an accident. The two already get into an argument in the taxi on the way to the airport about drinking, Tania says he gets way crazier than her. The two start getting into an argument watching the episode and he tells her that he doesn’t have time for her to undermine him. Tania awkwardly smiles at the camera.

Back to Kalani and Asuelu, they are going to sit down with Asuelu’s family and he hopes they don’t talk about money. Someone on Twitter mentions that Asuelu ordered the best of the best from the food truck for his family when he was not paying. Kalani says they spent about a hundred dollars on food. Asuelu tells his mother that he has $100 for her and she and her daughter look upset and angry. Someone on Twitter says that they’ve never seen somebody so disappointed about getting a free $100. Kalani says that once money was brought up that is all they talked about and then left.

Last, back to Libby and Andrei, someone on Twitter tells Libby to stop taking her father and brother’s side, they are as much to blame as Andrei. We see Andrei and Libby leave the restaurant with Chuck and Charley left behind with Andrei’s friends. Someone on Twitter says Libby and Andrei stick someone else with the bill again. Andrei claims that his friends paid for it.