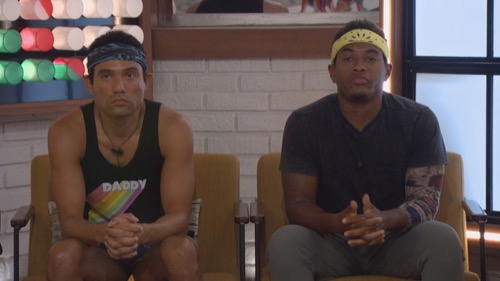 Tonight on CBS Big Brother 22 airs with an all-new Thursday, October 1, 2020, episode and we have your Big Brother 22 recap below! On tonight’s Big Brother season 22 episode 25 “Triple Eviction” as per the CBS synopsis, “Tonight on Big Brother is a Triple Eviction night.  First up we have David and Kevin on the block so we will see which one is sent home and then in a two-hour episode we will have two more evictions.”

For the first time in 20 years, three houseguests will be leaving the Big Brother house in one action night; it’s triple eviction night. Tonight, there is nowhere to hide. Kevin and David may be on the block, but the house scrambling, knowing they are going to have to start targeting their alliance members. Cody asks David if he should be nervous, he says yes, Cody tells him that he should be after taking the $10,000.00. David says it was panic, 10K, or nothing if he doesn’t make it through this HoH.

Cody sits with Kevin next who wants to soften the campaign against him. Kevin tells him that he is not coming after him, and he is desperate for someone to be on his side. Cody is starting to rethink if Kevin should be going home, or not David instead.

Dr. Will calls the houseguest to the living room, he says he was always thinking three moves ahead and they should do the same. Cody feels like the house about to explode. Dani loves Dr. Will but has no idea what he was hinting at. Houseguests are starting to think it is a double eviction, but little do they know, it’s going to be a triple. David does guess that it is a triple eviction. Meanwhile, Cody tells Enzo that the next shot is against Christmas or Tyler. Tyler on the other hand wants to get rid of Dani and Nicole. Tyler wants David to stay and help him get rid of his targets.

It’s time for the first eviction of the night, Enzo is up first and he votes to evict Kevin, Dani for Kevin, Tyler for Kevin, Christmas for Kevin, Nicole for Kevin, Memphis for Kevin. With an overwhelming vote of 6-0, Kevin is evicted from the Big Brother house.

Kevin is with Julie, he says he is surprised everyone voted him out, he thought he would get a few pity votes. He says the house is scary, people are very afraid of making moves. Kevin says it was his time to go home, he has struggled for weeks. Kevin finds out that his conversations regarding being bi-racial aired, and he is happy, he hopes he has brought awareness to some issues.

Time for the HoH competition, the houseguest who wins will have to immediately nominate two people for eviction. This competition is called, “it’s all about Will.” Julie will read a series of statements of season two winner, Dr. Will’s experiences from the neighbor’s house. Their goal is to determine if the statement is true or false. Get the answer right and they stay in the game, get it wrong, they are out. The last person standing is the new HoH. It doesn’t take long to go through the questions and for Memphis to win HoH. Everyone is immediately called to the living room. Julie tells Memphis to go to the head of the living and make his two nominations. Memphis nominates David and Nicole.

In the Veto meeting, Christmas says that things are too turbulent in the house and she has thus decided not to use the Veto.

It’s time for the live vote, Cody votes first to evict David, Christmas for Nicole, Tyler for Nicole, Enzo for David, Dani for David. All of the votes are in, by a vote of 3-2, David is evicted from the Big Brother house. David doesn’t hug anyone, he just puts on his mask, grabs his bag, and leaves. David is upset, he is trying to emotionally process what happened. He tells Julie that he is proud to have gotten this far in the game without winning any competitions. David says that he came back to prove that he could play and win with his social game. And, he won a power in the dark and that was his proudest moment ever. Julie asked David if going for the money, does that have anything to do with his eviction. He says probably, but he took a chance, he hedged his place in the house and thought at the time that it would be a good idea.

David says it was very difficult playing with houseguests who had a lot of experience in the house. It’s been fun, he doesn’t want to take away from that. Julie brings up the fact that he was wrongfully accused of voting out Ian, he says it was really frustrating, but it was a good game move by Nicole. Julie tells David that he is not the last person heading to the jury tonight, it is a triple eviction.

Julie calls everyone to the living room and tells them that they are not done yet, it is a triple eviction night. She says she hopes they were listening when Dr. Will says that he always plans three moves ahead, and she hopes they all planned three moves ahead. The night is far from over, they have to battle through another whole week of Big Brother. Everyone has to head outside.

The last HoH competition for the evening begins, this one is called, “it’s all about you.” Julie will read the houseguests a series of statements, only this time, the statements will be about events that happened earlier this season. The houseguests must decide whether the statement is true or false. Nicole and Memphis are out, and so are Dani and Enzo. Christmas, Cody, and Tyler are still standing. Christmas and Cody are out, Tyler is the new HoH. Everyone gathers in the living room, Tyler has to nominate two people for eviction. Tyler gets up, faces his housemates, and nominates Dani and Nicole.

Time for the Veto competition, this one is called, “feet to the fire.” On Julie’s go, they will race across the balance beams to their fire Veto puzzle and carry the pieces back one at a time, then complete the puzzle. Again, if anyone falls off the balance beams they are eliminated. Tyler wins the Veto and everyone heads back inside the house immediately.

Tyler has just won the Veto and has decided if he is going to use it and take off one of his nominations from the block. Tyler decides not to use the Veto, the nominations remain the same.

The live evictions begin, Nicole has no speech, Dani does; she tells everyone that Christmas and Tyler have a final two. Cody is up first, he votes to evict Dani, Memphis for Dani, Christmas for Dani, Enzo for Dani. The votes are in, Julie gives the news, with a vote of 4-0, Dani is evicted from the Big Brother house. Dani goes right to the door, picks up a mask, and hugs everyone except for Christmas and Tyler, as Dani is going out the door, Christmas says she guesses it is going to be personal, Dani says yes it is. Tyler says that Dani is the best player that he has played against in his life.

Dani is with Julie, she says she didn’t hug Christmas because she really didn’t like her. Julie asks if Christmas is better than her, Dani says that she was better at competitions than her. Dani says that she is most hurt by Cody, she can’t believe that he voted to evict her, it genuinely hurts. Dani says her loyalty was always to Enzo, Nicole, and Cody. Dani thinks they kept Nicole because she thinks they believe she is a bigger threat. Ultimately, Dani thinks that Tyler messed up her game for wanting to leave the game and then changing his mind. She respects Tyler on certain levels, but not for wanting to go home. Her final thoughts, this has been a fun season, but really stressful.

Julie congratulates the six for making it to the final four and announces that nobody will be returning to the game.