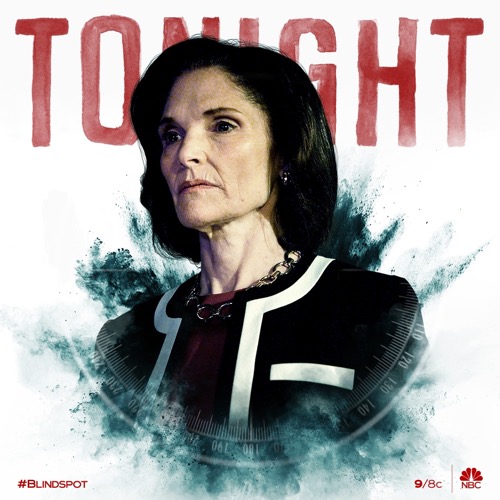 Tonight on NBC Blindspot airs with an all-new Thursday, July 2, 2020, episode, and we have your Blindspot recap below. In tonight’s Blindspot season 5 episode 8 called “Ghost Train” as per the CBS synopsis “The team scrambles to get ahead of Madeline and Ivy as they close in on the bunker’s location, but someone on the inside is feeding Madeline information. As her plan takes shape, the team may be forced to take desperate measures.”

Another tattoo registered. It was Jane’s Cerberus tattoo. It led back to a real ad about a fake company and Rich found it. Rich was pretty excited by what he found. He thought the others would react the same and only Patterson seemed to share the same enthusiasm. The two of them couldn’t wait to solve this latest tattoo. Hell, the team used to love solving tattoos, and now it was like they couldn’t be bothered. They were so jaded by everything that’s been going on that the whole tattoo thing barely registered a response. Patterson had to talk to her friends. She reminded them that tattoos were what they were best at and that had everything else under control.

The ZIP that had made it back to Madeline Burke had been tagged. The team could trace its every action and so they would know if or when Madeline chose to use it. Patterson didn’t think it was a big deal. She thought they had it control and so the tattoo investigation had actually revealed how wrong she was. It turns out the tattoo was warning them that the ZIP was about to be used. Madeline planned on using the ZIP into turning the entire population into mindless drones who would have to rely on her for everything they needed and so she was a threat. She was a threat that their friends were warning the team about.

The team had friends in high places who were sending them these tattoos to solve. Patterson hadn’t known who these friends were because she hadn’t been able to trace where this information was coming from, but things are different now. Patterson was able to trace this latest tattoo search and it led back to a location that was familiar to Zapata. Zapata remembered that area because that’s where Keaton was exiled. Keaton was given an assignment by the CIA that was as far away from home as humanly possible as punishment and so now he’s stuck in Europe. Keaton being in the same area as whoever their mystery friend is had been enough for Zapata.

Zapata believed Keaton was the one helping them. She wanted to go see him to warn him about what the team had found on Madeline and she thought he’d be able to pass on a message for her to his bosses in the CIA. Only traveling to Italy had exposed her. Interpol had found out where she was and a member of that organization had gone on to contact Madeline. Madeline was told Zapata was in Italy. She sent her people there and so Zapata doesn’t have much time. Zapata didn’t know she had been spotted. She went to Keaton’s safehouse like planned and she confirmed that Keaton was the one helping them.

Keaton was working with both Allie and Boston. The three of them teamed up in order to help their friends and Keaton claimed not to know what happened to them after that thing in Time Square. Keaton was also walking funny. He claimed to have slipped in the shower and at first Zapata ignored it. She thought the most pressing matter would be to warn him the ZIP was being flown across the Atlantic. She told him they had a tracker on it and she was explaining it all when she finally noticed his laptop. His laptop that didn’t have any electrical tape over the camera. Which was unlike him because Keaton is naturally suspicious.

Now was not the time to be less on guard. Zapata realized it was a trap too late. Madeline came in with her men and they killed Keaton who valiantly tried to make a last stand. Zapata’s team was also in danger. They found out the tattoo had been sent was a trap a little too late to help and so Patterson tried to send out warnings. She and Rich were stuck deleting everything in the bunker. She contacted Jane and Weller to tell them to run, but they were trapped and so it had seemed like the entire team was about to be captured. And it didn’t help that now was when their failsafes chose not to work.

Patterson and Rich couldn’t let their information be found. They had to destroy the servers while there was still time and so they rigged the place to blow. It was supposed to explode with one touch. They touched the trigger and it didn’t work. Both Patterson and Rich had to destroy the servers manually. This cost them time and they were found. Rich was grabbed. Patterson tried hiding out in the server room and she eventually ran out of time. She was trapped them when the bomb detonated. Patterson was killed almost immediately and Rich was forced to watch. He watched as his friend died.

Rich, Jane, Weller, and Zapata were all captured. Rich later told Jane and Weller what happened to Patterson. Only it was Madeline that told Zapata. Zapata had overheard complaining about how even in death the team gave trouble and she had asked who died. The team had lost one of their most valuable members. They were later dragged back to the FBI and this arrest was being given to Weitz. He was going to receive the credit for it. He had actually gotten rid of the blackmail information on him and so he had planned on running when he witnessed Madeline dragging the team in. And he knew then that he’d never escape her.