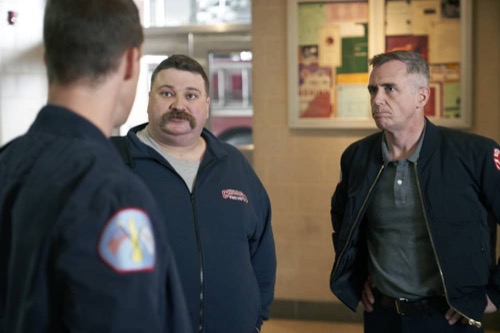 When one suspect’s background suggests domestic violence, Upton is forced to reckon with her childhood. Voight and Halstead butt heads over Halstead’s righteous instinct.”

Halstead is doing better. The shooting wasn’t affecting him. He’s been keeping on top of his appointments with his doctor and the stiffness in his shoulder was mellowing now. Halstead felt he was ready to go back to work. He talked the doctor into signing off on it. This was in spite of the doctor’s serious concerns about Halstead and so the cop went back to work. He had been partnered with Upton again. She met him at the doctor’s office and they were going to head back to work when they were forced to make a detour.

They responded to a 911 distress call. They later learned it was an armed robbery at a check-cashing store and they had been quick to respond. They came to assist people that were injured on the scene. They also questioned the eyewitnesses and one woman stood out. She said she didn’t see much. She didn’t join the fray until she saw the man on the ground and tried to help him. Halstead commended her for what she did. He thought she was brave for doing so and it was just unfortunate that she wasn’t able to help them identify the bad guys.

The bad guys had gotten away this time. They had hit the place like pros and they must have been casing it because they knew where the cameras were located. The detectives at the Intelligence Unit thought the bad guys must have had a lookout. They checked cameras on the scene and they found a Jamal Meeky acting suspiciously. They tracked him down using facial recognition. They brought him in for questioning and they asked him what he was doing. He told them he was a lookout, but for a different set of people.

Jamal noticed the police in the area. He called his crew to warn them they couldn’t sell drugs in the area and that’s it. He did, however, notice a white woman who was acting oddly. He described her and it matched the Good Samaritan that Halstead questioned. Halstead then learned the woman gave him a fake name. He later tracked her down and he asked for her real name. It was Michelle Sullivan. She was a part-time florist and she pretended he was a client when her husband came in. Michelle didn’t want her husband knowing she was talking to the cops.

Halstead got a feeling she was afraid of her husband. He later told his people and they looked into the husband. He was Shane Sullivan. He just served time for armed robbery and he served the full sentence because he hadn’t turned on his crew. He had been loyal to them. Shane was also smart. He didn’t flip on his friends and he seemed to have rejoined their crew the moment he left prison. He was the one behind the armed robbery. However, it wasn’t just armed robbery anymore. There had been a man injured in the chaos and he later died from injuries.

This means the crew was now responsible for a murder. The detectives wanted to catch Shane and his friends and they thought the best way to do that was to get Michelle. They brought her in for questioning. They asked her why she lied and they tried to get her to flip on her husband. They thought if they applied enough pressure that Michelle would break. She instead told them that they didn’t have anything on her or her husband and then she refused to talk to them. Michelle knew the detectives only had suspicions.

Michelle was also afraid of her husband. The detectives found evidence of him abusing her and each and every time she has refused to press charges against him. The detectives tried to use evidence of abuse against her. They showed her what her husband did and they pushed her into revealing what happened. Michelle hadn’t been in on the job. She had overheard her husband talking about it and she went there to stop him. She thought she could stop him. She wanted them to be a normal family and that couldn’t happen if Shane went to prison again.

Upton understood Michelle’s position. She knew the only way to get her to help them was to provide a tangible escape plan and so that’s what they did. They gave her away to escape her husband. They then told her the only way she could start over as if she wore a wire. She agreed to it. She wore a wire when she was at home with her husband and while they didn’t get a confession – they did overhear Shane mention a “truck driver”. The team investigated what that could mean and they learned that an armored truck driver had made a stop at the check-cashing joint a day before it was hit.

The detectives found this truck driver. They arrested him and unfortunately it got them no closer to bringing down the crew. The driver didn’t know the names. He is only gotten involved because his mother was sick and they couldn’t handle the medical bills. Shane apparently went to the same church as a member of the crew. Its how they found out about his sick mom and they decided to use it against him. But there was no evidence between them and the driver. The detectives had to come up with a new plan.

They later decided to let the crew go ahead with their latest heist. They were going to catch them in the act and it was working until Michelle changed her mind. She hid her husband’s keys. She didn’t want him to go or get arrested and so he got violent with her. Halstead had overheard everything. He became concerned for Michelle and so he decided to go in to protect her. He ruined the mission because he was too soft-hearted. He went in and the most they got on Shane was domestic violence. They arrested him for that after they got Michelle to make a complaint.

They later tried to turn that arrest into an advantage. They questioned Shane and he refused to talk. He wasn’t going to help the police get his friends. Shane waited until he was transferred to domestic court and then he was released. Shane could have gone anywhere. He chose to go back home and he beat the crap out of his wife. Halstead went to go check on her and he got her out of the office. They also arrested Shane on new charges.

Halstead later talked about what happened with Upton and Upton explained her childhood.

She also finished her story by telling him her mom was still with her dad.