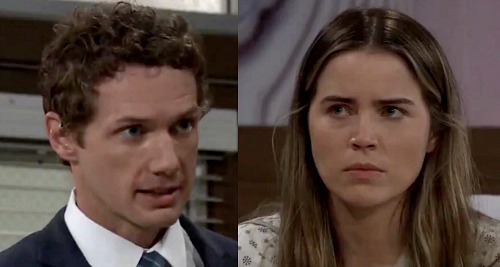 General Hospital (GH) spoilers tease that Cyrus Renault (Jeff Kober) is going to have a lot of loose ends to tie up in the coming days. Not only does Cyrus have the explosion aftermath to deal with, but he’s got Julian Jerome (William deVry) most likely on the run and carrying damaging information about him.

And then there’s Sasha Gilmore (Sofia Mattsson), who could potentially hurt both Cyrus’ reputation and his freedom if she sings about him giving her illegal drugs.

As GH viewers know, Cyrus didn’t just give Sasha any drugs; he tested out a new designer formulation on her which turned out to almost be lethal.

Sasha’s probably going to be pretty peeved to learn that Cyrus used her as a human guinea pig, but she’ll have bigger problems than just her anger to worry about.

Since Cyrus has already tried to kill Sasha once by turning off her machines in the ER, he might just try to finish the job once Sasha wakes up.

But how much longer can Sasha realistically stay alive once Cyrus finds out that she’s awake and alert? Cyrus just might try to get rid of Sasha again.

Since Cyrus is not one to typically do his own dirty work, it stands to reason that Cyrus will ask someone else to kill Sasha.

And given that Brando Corbin (Johnny Wactor) is about at the stage where his loyalty needs to be tested, it wouldn’t be too surprising if Cyrus orders Brando to make Sasha disappear before she has a chance to talk to the cops. And that would put Brando in a horrible position.

Of course, if Cyrus does order Brando to make Sasha disappear without a trace, then there’s a glaring possibility as to what might happen – Sasha could become the next person whose death gets faked in Port Charles.

It wouldn’t be that much of a stretch to think that Brando might kidnap Sasha and end up taking her to one of Sonny Corinthos’ (Maurice Benard) safe houses to hide out. That way, Brando could tell Cyrus that Sasha was dead, while Sasha is really alive and well.

Of course, that would mean that Sasha would effectively disappear from Port Charles life for a while, which would probably worry a lot of people, including Nina Reeves (Cynthia Watros).

Presumably, Carly Corinthos (Laura Wright) and Jason Morgan (Steve Burton) would know about Sasha’s whereabouts, and they might even share the news with Michael Corinthos (Chad Duell), but certainly the fewer people who know the better.

Do you think that Sonny will let Sasha hide out somewhere and pretend to be dead until Cyrus is no longer a threat? Stay tuned to the ABC soap and be sure to keep CDL handy for all your General Hospital spoilers, daily episode recaps, and news.