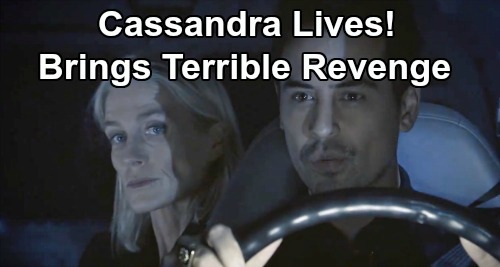 General Hospital (GH) spoilers tease that Sonny Corinthos (Maurice Benard) will be a man on a mission. After three separate attacks on the people he loves most, Sonny will be determined to figure out who’s behind them. The Corinthos clan is being targeted, but who’s running the show?

GH has been playing this mysterious enemy up big time, so there’s a good chance it’s someone we already know. With that in mind, let’s consider a powerful villainess who could be poised for a comeback.

Is Cassandra Pierce (Jessica Tuck) alive and stirring up more trouble? General Hospital fans know Cassandra was presumed dead in a boat explosion back in November, but presumed deaths rarely stick on soaps!

No body means nothing is final. Heck, even with a body, a soapy death can still be undone. However, it’d be particularly easy in this case to argue that Cassandra survived and swam to safety. Perhaps Cassandra has been plotting revenge on all her enemies from afar – and now could be when she’s finally striking.

Of course, Cassandra would want revenge on Valentin Cassadine (James Patrick Stuart) and Nikolas Cassadine (Marcus Coloma), but may want to let them battle it out.

Cassandra might as well let them see how much damage they can do to each other first! She can always come along down the road and strike some blows of her own.

In the meantime, Cassandra might’ve chosen to go after Sonny and his family. She wanted Sonny’s help to traffic drugs a while back – and later showed up on Sonny’s island. Cassandra also went after Michael Corinthos’ (Chad Duell) girlfriend, Sasha Gilmore (Sofia Mattsson), which led to furious Sonny’s threats.

That plot was really about Sasha’s connection to Nina Reeves (Cynthia Watros), but the point is Cassandra was very mixed up with the Corinthos clan and started a war – a war that may now have some unfinished business!

Cassandra could’ve teamed up with another mob family and received some assistance with the dirty work.

It’s worth mentioning that Cassandra was featured in a recent General Hospital promo. The rest of the video was mostly clips of beloved characters, but nobody has any kind of emotional attachment to Cassandra.

Why bother including her? Perhaps it was a little hint that Cassandra would still be important moving forward.

Bottom line, GH will need some big baddie to be behind these shootouts. They’ve set up a mystery that should end with a shocker. Will that shocker be that Cassandra’s alive? Did she target Sonny and his loved ones as step one of her revenge?