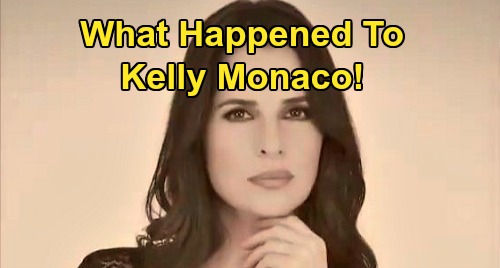 General Hospital (GH) spoilers reveal that fans are concerned thanks to some recent recast news concerning Sam McCall played by Kelly Monaco. According to Daytime Confidential, Lindsay Hartley has been tapped to fill in for Kelly Monaco (Sam McCall) temporarily. Their sources only expect Hartley to play Sam for a couple weeks before Monaco resumes the role.

However, the fact that Monaco needs even more time away after an extended break is troubling. There’s been some buzz about Monaco potentially battling COVID-19 during the show’s hiatus, but that was never confirmed. Of course, Monaco had hip surgery back in 2018, so there’s always the possibility her hip’s been giving her some issues again.

This could even involve some private family matter or something along those lines. There’s only speculation right now as to why Monaco needs a temporary recast, but GH viewers are sending her love no matter what!

Monaco’s a popular performer and a valuable part of General Hospital’s cast. Let’s hope that plan to return in two weeks or so pans out.

On Twitter, GH fans have been voicing their support for Monaco – no matter what she may be dealing with. “What is going on, I hope Kelly is okay,” one General Hospital viewer tweeted. “I really do hope all is well with Kelly, though,” another GH fan said. “Her health and whatever situation that has caused this comes first.”

One more fan tweeted, “I hope Kelly is okay and she is taking care of herself first and foremost…” That’s indeed the priority here as we await Monaco’s return to the show. It’s possible Monaco will make a statement at some point, so that’s something to watch out for.

Monaco could just as easily choose not to disclose her reasons for stepping away briefly, but we’ll keep an eye on the situation as it develops. CDL will have all the news and updates you need. In the meantime, we can look forward to Lindsay Hartley’s portrayal and give her a warm welcome.