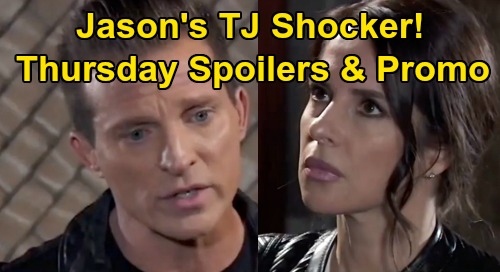 General Hospital (GH) spoilers for Thursday, April 2, tease that Trina Robinson (Sydney Mikayla) will dash down to the gallery looking for more advice. Trina will remain an emotional mess as she talks to Ava Jerome (Maura West). When Ava wonders what’s wrong, Trina will insist she needs Ava to help her understand something that doesn’t make any sense.

Ava may think this is about Cameron Webber (William Lipton) at first, but Trina now has a far worse problem. She’s furious and devastated over Marcus Taggert’s (Real Andrews) reputation being ruined. Trina doesn’t get why Jordan Ashford (Briana Nicole Henry) would just rat out her partner like this – especially since Taggert’s already been murdered. That’s bad enough!

Of course, Taggert is most likely alive and in hiding based on the clues GH has offered. Trina also doesn’t know about TJ Ashford (Tajh Bellow) and Jordan’s desperate mission to free him. There are a lot of layers to this story that’ll slowly have to be peeled back. For now, Ava will do her best to calm Trina down and get her through this tough crisis.

Meanwhile, Jordan will rip into Molly Lansing-Davis (Haley Pullos). Thursday’s GH preview video shows Jordan shouting, “Your actions had consequences! You did this Molly!” Poor Molly just wants her boyfriend back. Jordan needs to look in the mirror if she wants someone to blame for TJ’s horrible predicament.

However, Molly may put the deal with Cyrus Renault (Jeff Kober) in jeopardy somehow and provoke Jordan’s wrath in the process. Despite Jordan’s outburst, Molly’s not the kind of gal who sits down and shuts up. She prefers to take charge when she wants something, so she’ll turn to Brando Corbin (Johnny Wactor) for help on Thursday. Molly will work around Jordan since the commissioner won’t cooperate.

General Hospital spoilers say Brando will pitch in, but he’ll have to tackle another issue first. When Mike Corbin (Max Gail) saw Brando at GH, he looked completely stunned. Mike blurted out that Brando is dead, so Sonny Corinthos (Maurice Benard) may suggest that there was a little mix-up or simply lie that Brando’s someone else.

The important thing will be dialing down Mike’s stress level in this moment. Mike will forget about their encounter in a few minutes anyway, so there’s no need to fret over it too much. Brando should be impressed with how well Sonny handles his father. Carly Corinthos (Laura Wright) will insist family is everything to Sonny, so they’re all in this together.

Back with Mike, he’ll ask Sonny for a favor. Whatever Mike wants should break Sonny’s heart. Seeing Mike like this will continue to take a toll, but Carly will support Sonny when he needs her most.

Although Jason will warn Sam to stay out of it, that’ll be difficult since the man Molly loves is involved. Sam would do anything for her sister, but Jason will make it clear that the risk is too great.

Cyrus issues are about to create some conflict for Jason and Sam, but “JaSam” fans will trust that they can get through them. At Pentonville, Kevin Collins (Jon Lindstrom) will evaluate Cyrus and face what seems like a veiled threat. GH spoilers say Cyrus will offer a correction on that. If Cyrus threatens Kevin, he’ll argue that Kevin will know it.

Next, Laura Webber (Genie Francis) will get updates on Cyrus’ imminent release and hit the roof. Evidence or no evidence, Laura knows the guy is bad news. Since Laura doesn’t want Cyrus back on the streets, she’ll put a plan in motion. Robert Scorpio (Tristan Rogers) will wonder how Laura’s going to stop this. She’ll reply, “Watch me.”

Laura will be ready for a power flex as mayor, but it doesn’t look like she’ll be able to pump the brakes here. Cyrus will only release TJ if he scores his freedom – and TJ will indeed come home next week, April 6-10. The drama keeps getting hotter, so don’t miss what’s in store. CDL will always have the latest General Hospital spoilers, updates and news to pass along.