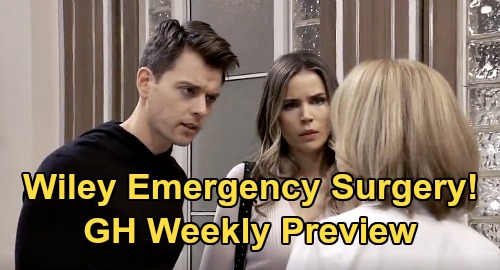 General Hospital (GH) spoilers preview tease that we’re in for some big developments on the ABC soap in the coming days. The new GH promo for the week of March 23rd deals with two major family crises – one involving Jordan Ashford (Briana Nicole Henry) and her ongoing ordeal with Cyrus Renault (Jeff Kober), and the other involving a health crisis with Wiley Quartermaine Corinthos (Erik and Theo Olson). There’s a lot coming, so let’s get right into it!

First, Jordan will find herself in too deep with Cyrus. According to GH spoilers, Jordan is going to be frustrated, since she did what Cyrus wanted by allowing his drug shipment to enter Sonny Corinthos’ (Maurice Benard) territory in Port Charles.

Jordan clearly thought that she’d get her son TJ Ashford (Tajh Bellow) back after doing Cyrus’ dirty work, but it looks like she’ll have another thing coming.

The new GH promo shows Harmony Miller (Inga Cadranel) telling Jordan in no uncertain terms that she’s a dirty copy now, and that Cyrus has her right where he wants her.

Clearly, Cyrus is going to hold onto TJ for a while, at least until Jordan is in too deep with her misdeeds to get out. He likely has more dirty work for Jordan to do before he’ll even consider returning TJ unscathed – that is, if he intends to return TJ at all.

The promo shows Cyrus smiling, clearly amused with what he’s managing to do to Jordan, but it also appears that Sonny is going to put two and two together and realize that Jordan’s in deep.

The GH preview promo shows Sonny saying, “Cyrus has TJ, doesn’t he?” But will Jordan open up to Sonny and confess what’s going on? It doesn’t look like it will matter, since Sonny seems to know what’s happened.

Next, the new GH preview for the week of March 23rd deals with another pending crisis involving Wiley’s health. Michael Corinthos (Chad Duell) is shown frantically running down the staircase in the Quartermaine mansion yelling that they’ve got to get Wiley to the hospital.

Michael and Sasha Gilmore (Sofia Mattsson) are next shown rushing into GH with Wiley to get him some much-needed medical attention.

What could be wrong with Wiley? Well, it could be his heart, since he did have a hereditary heart condition that was diagnosed shortly after he was born. Or could this be a completely different problem?

Whatever the case, Michael is shown in the promo being told by Monica Quartermaine (Leslie Charleson) that the next step for Wiley is surgery, so this sounds pretty serious.

Of course, this is going to cause some major problems with Nelle Benson Archer (Chloe Lanier), who will necessarily need to be contacted about this development with Wiley.

As GH viewers know, she and Michael are currently in the midst of a custody battle over Wiley, so one wonders whether Nelle will somehow use this health crisis to her advantage in the custody case – after all, the preview shows Wiley going into crisis while in Michael’s care.

At any rate, it appears that we’re in for an exciting week on General Hospital, so stay tuned! We’ll give you further updates as more GH news comes in. Stick with the ABC soap and remember that CDL is your place for updates on all the soaps.

“You’re a dirty cop now. Cyrus has you right where he wants you.” #GH pic.twitter.com/Lrp84mUMjZ