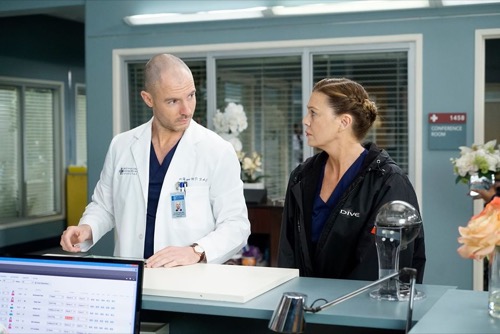 Meanwhile, Amelia worries about sharing her pregnancy revelation with Link. Owen and Teddy take a big step, and Bailey deals with grief over her recent loss.”

Grey Sloane Memorial Hospital was dealing with an influx of patients. There was a car accident over at Joe’s Bar and a lot of people were injured. They were taken to the nearest hospital which happened to be Grey Sloane and so their doctors were all called in to deal with the many patients. Meredith got a call and so did Amelia, but Maggie didn’t show up. Maggie quit her job at the hospital. She had performed surgery on her cousin and her cousin had died under her watch. Maggie had also taken some time to deal with her grief.

She even thought she was ready to come back to the hospital at one point. Maggie came back and she began to doubt herself in all that she did. She brought in another surgeon to sit on her surgeries with her. She had everyone monitor her actions as if she wasn’t a fully grown adult and Maggie ultimately quit because she gave up. She gave up on her career as well as herself. Maggie was done and she was probably wallowing at home alone as her sisters dealt with the victims of this car accident.

Many of those same victims were interns at the hospital. The doctors knew these patients and they all wanted to do what was best for them. So, Meredith called in backup. Meredith called in Richard and Owen. The boys were both given privileges at the hospital and that allowed them to help. Jo also came in to help and it turns out she was distracted. She had volunteered to become a safe haven volunteer. This means she picks up the babies that have been abandoned at firehouses and it was her job to bring to the hospital where she was supposed to call up Children Services.

Jo didn’t do that. She picked up the baby and then took it home with her. She was later found by Linc who had kept his wits about him. He, therefore, told her to bring the baby to the hospital and Meredith ended up saying the same as well when she found out what was going on. And together they convinced Jo to do the right thing, she brought the baby to the hospital and he was checked out by the new Head of Pediatrics who was this hot Irish doctor. He was also a gift from Cristina for Meredith.

Meredith hasn’t gotten the chance to enjoy her gift yet. They’ve been arguing since they met and so she hasn’t gotten to know him. They’re still just strangers at this point. Meredith also was pretty busy. She performed surgery on Hellmouth and then she had to treat Schmitt because he passed out in the OR. He was apparently showing signs of a heart attack and Meredith thought it was because he kept stressing out about what happened. Schmitt was at the bar when the car came in. He was pretty frazzled when they were treating patients back at the bar and he still hadn’t calmed down by the time they brought him to the hospital.

There was also Parker. Another intern who had been at the bar and he suffered a head wound that triggered his PTSD. Parker served in the military. The car accident brought back all those memories and so Parker hid in the chamber. He was thankfully found by Amelia and Teddy who had gone looking for him and the ladies got to talking while they were at it. They discussed Amelia’s due date and that was tricky because Amelia’s baby was conceived during some overlapping. And so this pregnancy isn’t going to be as smooth as she first assumed.

Schmitt’s situation, though, had worked out. He was suffering from heartbreak syndrome which looks like a heart attack and happens because he was under a tremendous amount of stress. Schmitt is going to some time off of work. Which wasn’t so bad. Hellmouth’s own case went from bad to worse. She almost died on the operating table and Bailey had frozen during surgery. So, it was Richard that stepped up to handle it. Richard saved the day by saving the intern and later on he was there for Bailey as she finally cried about her miscarriage.

Koracick was also shown to have a heart. He could be a nice guy when asked and so both Jackson and Avery learned something new. Owen, then realizing that Teddy has options, decided to act. He later proposed to Teddy. Teddy was skeptical about the offer because she thought Owen had a pattern and he does. He’s married or got engaged to every single woman he’s ever been with. And so Teddy didn’t want to be of the many. She wanted to be special and Owen was able to convince her that she was.

The two got engaged and that stopped Amelia from telling Linc her secret. It also broke Koracick’s heart.

And DeLuca went to see Maggie about a former patient of hers because he wanted to bring her good news and unfortunately he was there when she found out she was being sued for her cousin’s death.