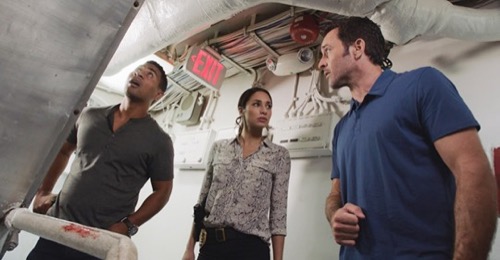 Tonight on CBS Hawaii Five-0 air with an all-new Friday, March 6, 2019, episode and we have your Hawaii Five-0 recap below.  On tonight’s Hawaii Five-0 season 10 episode 19 called, “e ho’i na keiki oki uaua o na pali (home go the very tough lads of the hills),” as per the CBS synopsis, “Five-0 investigates when a rancher is murdered after uncovering human skeletons on his property where legend says that Civil War-era gold coins were buried. Also, Quinn’s former stepdaughter reaches out for help after her father doesn’t come home.”

HPD called Five-0. The team was needed because four men who came riding in on horseback had killed a man. The victim was later identified as Daniel Kekaula. He was tortured first because he was dragged by horses. He was then killed once the horseman had finished with him. Daniel had been shot towards the end and so the team got to work on investigating the man’s murder. They looked into Daniel’s life. They went looking for potential suspects and Quinn hadn’t been with him. Quinn had needed to handle a private matter.

Quinn was actually with Adam when this problem occurred. He hadn’t done anything. Adam has been taking some time off. He had needed to clear his head. He also made several mistakes along the way that had caused problems between him and McGarrett. The two men needed to work things out. McGarrett was still angry with him after everything that Adam did so and so he didn’t want Adam back onto the team until he said so. Adam, therefore, had a lot of free time. He used some of that to hang out with Quinn.

She was the only person still treating him like his old self. They went surfing together and she had been with him when she got a call from a friend. This friend had asked her for help and so she left him to go see this Olivia. Olivia was a teenager. She seemed to be fending for herself because her parental figure wasn’t around and so Quinn stepped up. Quinn made sure she got to school. She also talked to Olivia about how things have been going and she got an update. Olivia had asked her to come to some of her events and Quinn had mentioned something about it being difficult for her.

Quinn was dealing with this while the team worked their murder. They found out Daniel was heavily in debt. He owed money to everyone and he had been looking for a loan when he died. He eventually found someone to take a chance on him. He received his loan and he put the money to good use. He bought equipment and he hired some farmhands to help turn his ranch into a macadamia farm. The farm would have brought in serious money. It could have helped him get back on track and so right after everything seemed to be coming together – Daniel suddenly changed his mind.

Daniel began digging a huge hole on his property. He also fired his farmhands and so the team suspected he found something on his property. Something that put his murder into motion. They went back out to the ranch and this time they searched the ground. Lou ended up finding bones. These bones were somewhere between 130 and 140 years old. They were of a man and woman and he believed they belonged to the former ranch owner. A guy by the name of Abel Ho’okano and his wife. It would match with the dates of death.

Only these bones showed that the couple had been murdered. Daniel would have had to turn over the bodies to the state department and that would have land even more unprofitable. Daniel had no reason to celebrate finding the bodies and yet he did. He thought these bodies meant something. The team tried to find out what that was and so they reached to Kip Ho’okano. He was the last member of the Ho’okano family on the island. He was the only one that could tell them about his uncle Abel and so the team asked him to come in.

Kip wasn’t what the expected. He still wears a cowboy as part of his heritage. He was also an accountant and he told them the old ranch land was cursed. According to old family legend, Abel and his best friend Buddy Makoi had won some civil-war era gold coins on the mainland. They then took the coins and bought ranches next to a year each other. There was still some leftover gold afterward and unfortunately, the two men ended up fighting over it. The Makois killed Abel’s wife and Abel took the rest of the gold and went back to the mainland.

The legend was just a little bit off. Abel as it turns out never left the ranch. He appeared to have killed himself in a grave he dug for his wife and he may even have buried the gold with them. This meant Daniel could have come across this gold if he found the bodies. He was left celebrating because he thought he had found his windfall and then he was murdered. He could have been killed by the Makois. There was still bad blood between the families and the Makois could have felt that gold rightfully belonged to them.

The team went back out to the ranch. They saw a couple of men on horseback on a hill and the only way to chase them down was to get on horses. McGarrett and Danny went after them. The two men found a young man trailing them with a sniper rifle and they arrested him. They then used him to lead them to the rest of the men. McGarrett and Danny found their murderers and they took care of them. They didn’t find the gold. The men refused to tell them back when they were all living and so now there was no way of getting answers seeing as they were all dead.

Quinn meanwhile hunted down her ex-husband Jake. Jake was Olivia’s father and he has a gambling problem. He was even taking money from his kid to feed this problem. It had ended his marriage with Quinn and she was still involved with the family because she still cares for Olivia. Things were just complicated right now. Quinn had asked Adam for help and he assisted her in tracking down Jake. He was several days into a binge. He had taken out high-interest loans from a loan shark and he had needed help.

Quinn later arrested him. He was being charged for illegal gambling and as part of his probation, he was going to have to enter a program. Quinn was hoping this program would finally help him. She wanted him to be better for his daughter and she hasn’t quite given up on him just yet.