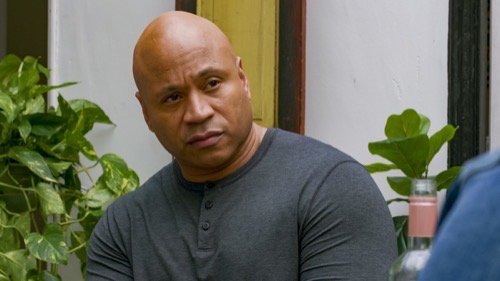 Nell is in charge. She’s been taking Hetty’s place because Hetty isn’t around. The older woman was off doing her own thing. It’s become a habit of hers to disappear every few years and it’s usually always justified. She was an important person. She was most likely doing important things and it’s not like her seat is vacant. Hetty left Nell in charge of the team. Nell was running point for everyone and she seemed to do great as the boss.

She resolved that war crime case without anyone getting hurt. She also followed up on one of Hetty’s leads by sending Sam to meet with a potential whistleblower who was harboring a military secret and unfortunately that was the first true test of her new leadership because her whistleblower almost killed one of her agents.

The potential whistleblower is Donald Harris. He called their tip line claiming he had access to military secrets and that he would only tell them about it if he gets to meet an agent in person. Harris isn’t in the military. He’s a CPA. He works for an accounting firm and his firm doesn’t seem to have business dealings with the military either. Harris’s claim seemed unfounded.

Nell wouldn’t have thought a man like him was telling the truth or even knew what he was talking about if it hadn’t been for Hetty. Hetty vetted Harris. She believed he was a credible source and so now its up to the team to try and figure out why. They would have liked to have asked Harris. Only he was in bad shape after he tried to run Same off the road.

Sam was okay. Harris was not. He was in the hospital and Rountree had been sent to question the moment he woke up. There were still several questions the team needed an answer to. The team did their research on Harris. They couldn’t find anything at first glance and so they carried a deeper dive. Kensi went to Harris’s office. She tried to get some answers and she was met with a stone wall.

Harris’s boss asked for an attorney. He didn’t want to speak to a federal agent without one and that’s odd. People tend to be cooperative once they hear a federal agent is interrogating one of their own. Harris’s boss clamming up as he did had made the team believe he knew something and was afraid to say it.

Sam interrogated Harris’s roommate. She had no clue why Harris would turn to NCIS for help and she knew about his work because she said Harris was a firm rule-follower. He didn’t speak about his clients. He didn’t help them cheat on their taxes and rumor has it he can get a little spicy with people who don’t follow the rules.

According to his roommate, Harris tends to take all the breakage of the rules as a personal violation. He could even be dramatic at times. Sam heard the roommate out and he initially assumed that Harris might have overly dramatized the information he has on the military however that didn’t explain the device he found. He found a surveillance device hidden inside of Harris’s smoke detector.

Sam showed the device to the roommate. He followed it up with questions about whose been in the house. He asked about cleaners or friends and the roommate couldn’t remember anyone who came by recently. Harris wasn’t dating. He was interested in his very good friend Keilani who was another accountant and he thought something might have happened if she hadn’t have moved away.

Sam asked about this Keilani. He figured she would be the best on Harris’s motives and so he asked where she moved. It turns out she’s working on a naval base. Keilani was working right up until she disappeared a few days ago and no one has heard from her since. And another thing the team found was that Harris’s car had been hacked.

Harris hadn’t tried to drive Sam off the road. Whoever hacked his car was doing their best to stop Harris from spilling secrets and they might have stopped him for good because the doctors said Harris’s coma might be permanent. Harris couldn’t speak for himself. He could be lost forever and so could Keilani.

It was up to the team to get justice for them. They knew that whoever was watching Harris at his home had probably followed him to the meeting with Sam and hacked the car as a means of killing both parties. This person wasn’t done because Rountree stopped another assailant from kidnapping Harris. He stopped him and interrogated him. Rountree was still working towards answers while Callen went to the naval base.

Callen was asking people about Keilani and what she could be working on. He especially wanted to know if she had any connection to Cryton Avionics. It was important because Rountree’s prisoner turned out to be an engineer from Cryton Avionics and the team looked the company up. On paper, it was the next new thing in aviation defense. It was however a little different in person.

The company had a nice building with a pretty lobby and it was completely empty. It was an empty warehouse with just the lobby there for coloring. The company didn’t exist in person and it couldn’t have been closed down because of the pandemic because people weren’t building rockets at home. Not the rockets that actually go into space, anyway.

Callen didn’t immediately find a connection between his missing accountant and this company. Only he did find out that Keilani often played the ditzy card and it was working until someone spotted her making copies of secret files. She had claimed at the time that she wanted to take it home with her because she wanted to continue working on it. Keilani was also very attractive and so she got away with such a lie.

She either went looking for something or found it by accident only she came across information that frightened her. It’s the only thing that would explain why she told Harris and if she told him then she probably told the third member of their trio. The team tracked down her good friend Logan and Logan wouldn’t say where she was.

Logan was just prepared to tell them what she found. He showed the file that claimed the navy ordered a weapon from Cryton Avionics and, by doing that, he told them about the fraud. There was no true weapon. Cryton Avionics didn’t have it in them to build one and so they were charging the US Navy for a weapon they weren’t building and that SECNav didn’t even know about. It turned out to be a fraud.

Keilani’s boss at the base was stealing billions from the defense fund in order to buy a weapon he knew didn’t exist. And a billion-dollar fraud was worth killing over.

Harris later woke up in spite of the team’s worst fears and so he was reunited with Keilani who was also fine.

Keilani’s boss was arrested for trying to defraud the Navy.

Nell was able to wrap this case up. She did a great job and the only one who didn’t see it was her. Nell was still growing into the job. She knows she needs to relax a bit, but it’s hard and so it’s a good thing the team is also her family and they’ll help her when needed.

Only Deeks didn’t get to work the case because LAPD is ending all liaisons for now and so there’s no telling when he gets to return.