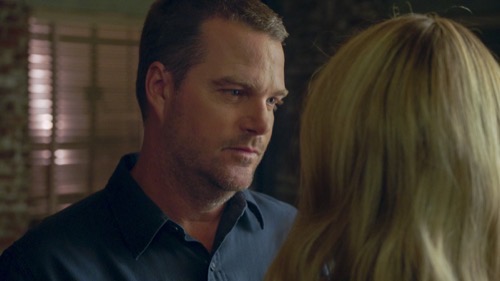 Tonight on CBS NCIS: Los Angeles returns with an all-new Sunday, December 6, 2020, season 12 episode 4 called, “Cash Flow” and we have your weekly NCIS: Los Angeles recap below. On tonight’s NCIS Los Angeles season 12 episode 4, as per the CBS synopsis, “The body of a murdered Navy reservist is found by thieves in the midst of a robbery, and NCIS must work with the burglars to find the killer; Kensi and Deeks struggle to decide if they are ready to make the leap and buy a house.”

The Deeks Household is growing. Kensi and her husband Martin Deeks are seriously considering having a baby and they were willing to all methods. They discussed IVF. Kensi thinks they should put money they would have spent on a house into a wonderful opportunity like this and so she was optimistic. She believes they will get pregnant fairly fast. She wasn’t like Deeks who was worried about the money and possibly going into debt. Deeks tends to be a pessimist. He calls it their journey of infertility. He also thinks there should be a cap on how much they were willing to spend and the couple were going back and forth on this when they heard that an old case of Kensi’s was rearing its ugly head.

Back in 2008, Kensi took down David Kessler. Kessler had his hands in everything at the time and that even included human trafficking, He was a bad dude. Kensi was glad when she took him down because she put a horrible human being in prison and the arrest gained the attention of NCIS. Hetty hired Kensi because of this arrest. It was her introduction to the team.

Kensi has come a long way since then and in the past twelve years she’s just confirmed how much of a badass she really is. Kensi never thought to hear about Kessler again or to have anything to do with him. She’s moved on and it turns out he never did. Kessler grew to be obsessed with the woman who sent him to prison. He remembered Kensi in spite of the years and he came up with a plan to help him get out.

Kessler befriended a man named Randy Sinclair. Sinclair was a former CIA officer who was fired once the CIA realized how unstable he was. He was deemed a sociopath who loved killing and so he was let go and his time there was erased. The CIA acted like they never heard of Sinclair. They pretended he didn’t exist and they continued to do so after Sinclair went to prison for attempting to assassinate the president. Only Sinclair was sent to the same federal prison as Kessler and the two became friends. They plotted their escape together. Sinclair managed to flee and there’s been no sign of him. He wasn’t like Kessler. Kessler made sure he was caught because he wanted to flip on Sinclair and he was only willing to do so as long as he gets to talk to Kensi.

Kessler wasn’t just obsessed with her. He wants to rape her and murder her. He’s also not sure which one he wants to do first. Kessler seems to think he’s important to Kensi and that she’s remembered him all this time and its just not true. Kensi forgot all about him. She’s met other bad guys. She’s taken out other bad guys and so she’s moved on. Kessler was just a case to her.

He was no one important and so she had no problem with speaking to him now. Kensi went to the federal prison. She found out about his time there. He was a horrible person until one day he supposedly found God and he went ultra-Christian on everyone. He even had the prison convinced him that he turned over a new leaf. Its why they weren’t worried when he befriend Sinclair.

Kessler now wants to trade information. He’s willing to tell them about Sinclair and the man’s movements as well as motivations if it gets him in front of Kensi. Kensi did come to see him. She did come to ask him about Sinclair. She asked him what Sinclair was up to? Does he still want to kill the president? Kessler refuse to give her information. He just toyed with her at first and he even told her that they’ll have sex one day.

Like Kensi will suddenly leave her husband to have sex with a criminal. Kessler was delusional and he was especially delusional about Kensi. Kessler did however admit that Sinclair does plan on still murdering the president. He said that to keep Kensi interested and it worked. Kensi had to hear him out. She asked him about Sinclair over and over and she got nowhere because Kessler didn’t want their time to come to a close.

Kensi tried pressuring him. She and her team dug into his life again and the only person he seemed to be close to was his former girlfriend Michelle Boucher. She had been addicted to cocaine when they met. She was willing to do anything if she got to keep getting drugs from him and so Kessler took advantage of that. He broke Michelle. She was still terrified of him and she didn’t want to talk about him or risk angering him.

It had been Callen who convinced her differently. He told Michelle that she stood by while Kessler did horrible things to other women and to children. She had to speak up now else she was continuing his evil. Michelle therefore chose to talk. She told Callen that Kessler once told her that he had been physically and sexually abused by his mother who sold him to her clients.

Michelle also said Kessler was intelligent, but he didn’t know how to read or write and so the team used that. They used that to undermine Kessler. They reminded him that they were still things they can do for him like confront his mother for him. Or even get his mother to apologize. Kessler said his mother would never apologize and so he didn’t fall for that one.

The team next suggested they put him on the phone with Michelle. He agreed to it and unfortunately Michelle couldn’t go through with it. She pulled out at the last minute. She was still too terrified of Kessler to speak to him and so once again they couldn’t give Kessler what he wanted. Kessler wanted at lest one thing before he gave up his information on Sinclair.

The one thing the present demanded was that this conversation was classified. He didn’t want anyone finding out about it and so Kensi wasn’t even in the same room as Kessler when the phone call happened. She just knows the call happened. Kessler was a happy man afterwards and he showed Kensi where Sinclair was on a map.

The team moved on the location. They found Sinclair and they arrested him. But Kessler was later released from federal prison thanks to an executive order from the president. His threats to now rape and murder Kensi were considered genuine threats. Michelle is now missing. She turned out to be working with Kessler and so now the two are reunited like nothing has happened and she wasn’t even jealous about his obsession with Kensi. And it seems that Kessler helped Sinclair break out just to get in touch with the president himself.

The same president he claimed was an old friend of his.