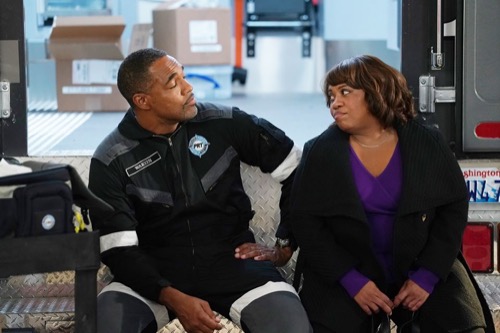 Tonight on ABC Station 19 returns with an all-new Thursday, March 12, 2020, season 3 episode 8 called, “Born To Run” and we have your Station 19 recap below.  On tonight’s Station 19 Season 3 Episode 8 recap as per the ABC synopsis, “The Station 19 crew responds to a drunk driver scene. Meanwhile, Dean receives advice from Pruitt on a difficult situation, and Sullivan seeks help from Dr. Amelia Shepherd.”

Tonight’s Station 19 season 3 episode 8 looks like it is going to be great and you won’t want to miss it.   While you’re waiting for our recap make sure to check out all our TV recaps, news, spoilers & more, right here!

Rigo is going to make it. His condition was stabilized at the hospital and the doctors there believe he’ll make a full recovery. This was great news for the team. The others were glad he was going to be okay and Jack was able to breathe a little easier. He blamed himself for what happened to Rigo. He slept with Rigo’s wife and then he failed to protect him out in the field. The sub they have for Rigo was also a friend of the man’s. He would occasionally glare at Jack whenever he got the opportunity and so Maya told him to back off.

Maya didn’t want any more drama. It’s bad enough that someone almost died in the field because of it that Maya didn’t want any more trouble. She told the sub to be a grown-up. She then arranged everyone on shift to be at their best. She stepped up and she did her job. She was a leader when the Station later received a distressed call. They were told there was a roadside accident and unfortunately it looks like a good seven people were dead because of it. Maya also didn’t shield the Probie. Dixon was given a firsthand look at what happened on scene.

Dixon and Montgomery treated the cause for the accident. It was a man and he smelled like vodka. He clearly got drunk. He then took his life into his own hands and risked everyone else by driving drunk. The driver crashed into a group of bikers. He didn’t really deserve to be treated or saved and yet Maya made sure that he was. She did her job. She also made sure everyone else did theirs. Jack and Andy were asked to fan out to see if there were any other victims nearby and they did so. They found a couple of bikers who were badly injured.

They also found a woman stuck in a tree. She was thrown at that angle and so both Andy and Jack called for extra help. Jack treated her while Andy treated her husband. Her husband how his wife was doing and Andy lied to him. She told him Lisa was doing okay. The truth is Jack didn’t really get much of a pulse and so she was barely alive. She was dying and it was all the drunk driver’s fault. His situation reminded Ben about Sullivan. Sullivan was taking fentanyl supplies from the medic cart and he was abusing it.

Sullivan tried to stop. He threw away the rest of his fentanyl supply and that didn’t stop the urges or the pain. He was abusing the drugs because of the pain. He was in constant pain and he needed surgery. Sullivan turned down the surgery. He instead went to Dr. Amelia Shepherd because he thought she would understand what position he was in and she did. She told him there was a meeting for drug addiction. She reminded him that he was using painkillers just to get out of bed and that he had OD. Sullivan was an addict whether he admitted or not.

Amelia could see that. She was an addict herself and so she was very supportive of Sullivan. She didn’t want him to feel like he was in this alone. Amelia told him about the meeting and she asked him to come. Sullivan was considering while the rest of his team were still working the drunk driver accident. They later learned that they were missing a biker and so they went looking for him. Vic wasn’t a part of the search. She had stayed behind at the station house because after the rocket there was a sudden uptick of everyone believing that the aliens were coming.

Vic handled all the crazies that came through dispatch. She was dealing with them when her boyfriend Jackson came in with all her stuff. He seems to have finally figured out that Vic moved in with him without telling him and so he told her he wasn’t ready. They weren’t at that stage just yet. They also needed to talk about it before she just decided to move in and so they agreed to table their discussion until later. Once they were both off work and could talk about the ramifications of her getting kicked out of her other place.

There was also the situation with Miller. Miller took time off work because he thought he was going to be raising his daughter with his ex-girlfriend JJ and now that’s off the table. She left them. JJ didn’t want to be a parent and so she put everything on him. She even told him she’d understand if he put the baby up for adoption and Miller was considering it. Miller wasn’t sure if he wanted to be a parent. He hadn’t been sure of much in his life. He made his decision to be a firefighter after going into business with his dad and working with a couple of jerks that did drugs.

One of the guys was so out of it that he fell off on Miller’s houseboat. Miller saved his life by performing CPR and that, as well as Pruitt being there, had been enough to get Miller to reconsider his life. He left his father’s business. He tried out for the Fire Academy and now he was a firefighter. He also wants to consider if he’ll be a father or not. He thought about giving the baby up for adoption and he talked to Pruitt about it. Pruitt was dying. He was never going to hold his grandchildren or be there for his daughter’s wedding. Pruitt was losing out on everything.

Pruitt told Miller that being a father wasn’t going to be easy. He also couldn’t keep considering adoption every time things didn’t go perfectly and so the two men talked about everything. They were doing that when the rest of the team returned to the station. Maya didn’t make any speeches. She was asked not to and she respected that. She let every go. Dixon went out for drinks with Andy, Jack, and Montgomery and they told him how to cope after a rough day. They were at the bar when Rigo’s wife came in and so Jack tried to talk to her, but she pushed him away.

She blamed him for what happened to her husband. She also wanted to go back to drinking alone and so Rigo’s wife remains self-destructive. Only this time she wasn’t taking Jack down with her. Jack tried going back to Andy to help blow off some steam and surprisingly she turned him down. Andy thought sleeping together was too messy. She wanted to go back to being friends and so Jack agreed to it even if he didn’t necessarily like it.

Miller later came to the conclusion that he did want to keep the baby. He didn’t know how it was going to work with his long shifts and so Vic came at just the right moment. She told him that she could move in and help with the baby. She needed a place to stay. He needed help. It was the perfect solution and so Miller agreed.

He can now raise the baby and so he named her Pruitt. Prue for short.

Ben also talked to his wife who figured out it was Sullivan taking drugs.

Sullivan meanwhile was kissing Andy because she showed up at his place and she told him she wanted to take a chance on them.

And later Maya broke down because she felt like the drunk driver that ruined Station 19.