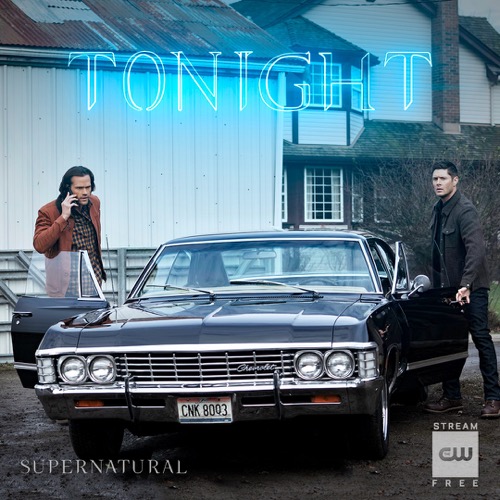 Supernatural airs tonight on the CW with an all-new Monday, March 16, 2019, season 15 episode 12 called “Galaxy Brain’ Journey,” and we have your Supernatural recap below. On tonight’s Supernatural season 15 episode 12 as per the CW synopsis, “Sam and Dean respond to a frantic call and together along with Castiel, Jack, and Jody, assist in an extraordinary and heartbreaking rescue. Billie surprises everyone with a visit to the bunker.”

Four Weeks Ago – Earth 2 – Chuck arrives at the Radio Shed. A salesman talks to him while he looks at TVs. Chuck explains that he needs an audience. He takes control of the TVs and explains how he created the world. He goes off on, complaining about Sam and Dean. He doesn’t like them but they challenge and surprise him. He realizes he needs less, less distraction. He clears the TVS and swears off alternate universes.

Sioux Falls – Present World – Jodi is looking at a dead cow. The girls call, dinner is ready. As she heads to leave she sees something strange. She heads into a barn. Something jumps out and attacks her.

Sam, Dean, and Cas talk about Jack and the eating of the hearts. The whole thing is disgusting and now he doesn’t have a soul. Cas has his concerns but Jack trusts Billy and he trusts Jack. Dean thinks the same while Sam wishes they knew more.

Jack is in his room talking to a woman when Sam knocks. Sam asks who he is talking to, Jack says no-one. Sam tells him how happy they are to have him back.

Cas and Dean sit and have a drink, talking about how Cas was supposed lost when Jack was gone. He knew his story wasn’t done. And now he is back. Dean has a few laughs about what will happen to Chuck, the irony of it all. Jodi calls and says she needs him to come to her or she will die.

It’s daylight, Dean and Sam arrive at the barn with a fine Jody tied up. Kia’s doppelgänger comes at them from out of nowhere. She jumps on Dean, she wants her spear back. Her world is dying, she has seen it in her dreams and now she needs it back to save her planet. She shares that Kaia is alive and she can see it through her eyes. She needs their help to get back there.

Cas and Jack are playing connect four. Cas is being a bad sport. Sam and Dean arrive with Jody and the doppelgänger. Cas meets Jody for the first time.

Well, the others work to solve their problem on how to get to the other world, Jack and Kaia doppelgänger talk. She’s mad Jack pushed Kaia to the other side. She begs for Jack’s help. Jack Dream walks using the doppelgänger. He runs to tell Sam and Dean. Merle shows up out of nowhere, the woman Jack has been talking to in his room, who is friends with Billy. She is also a reaper. Jack tests her by telling her she can help them or he’s gonna do what he wants anyway and she’ll have to go tells Billy. She finally agrees to help but she’s gonna need Cas’ help and it should be enough to keep Chuck off their radar.

They all get ready to leave to go help, Kaia. Cas asks Jody to stay behind. Jodie is a little offended until he explains that this is about Claire and how it would kill her if something happened to Jodie who means so much to her.

Using the stone and their magic, Sam, Dean in the doppelgänger head into the doppelgängers world. They arrive immediately into some bad weather and several red-eyed creatures who seem angry at first until they realize they’re scared. They head to find Kaia. When she sees them, she hugs Dean. They are ready to head home but the doppelgänger doesn’t want to go with them. They arrive back at the bunker safely. Jodie hugs Kaia. She is reunited with Jack before leaving to go home with Jodie.

Merle reassures them they are safe from Chuck. Billy appears suddenly and kills Merle. She is mad that Jack has been bending the rules. She shares that all the worlds are dying except their own. It’s Chuck. He is wiping everything clean. She has all the books, the library to everything and how everyone dies, even God. And all of them are in God’s book. They have work to do. They are the messengers of God’s destruction.

Chuck is still working on getting rid of the other worlds at the store. The clerk looks crazy, He has been there for weeks. Chuck tells him all will be fine as he leaves, blowing things up.