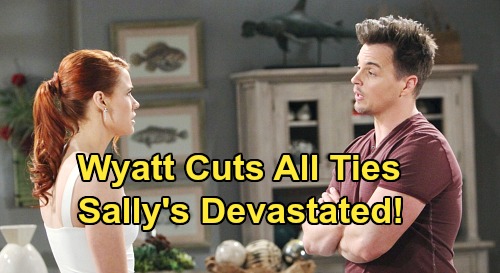 The Bold and the Beautiful spoilers (B&B) tease that Sally Spectra’s (Courtney Hope) acts of fraud will come back to haunt her. It may take some time for everything to finally blow up, but Sally will have to face the music sooner or later. Once that happens, Wyatt Spencer (Darin Brooks) may be out for blood!

B&B fans know that Wyatt recently talked to Katie Logan (Heather Tom) and Quinn Forrester (Rena Sofer) about his internal conflict. Wyatt’s really struggling over Sally’s plight and the decision to push her out of his home.

It wasn’t a decision Wyatt took lightly, but he doesn’t think he’ll be able to give Sally the care she needs. Of course, Flo’s feelings were a huge part of Wyatt’s choice.

Quinn expressed how proud she was of Wyatt for being kind to Sally in her time of need. Wyatt has bent over backwards for Sally – just to show her how much she still means to him. However, caring for someone and being in love with someone are two very different things.

Most of Wyatt’s internal conflict is coming from Sally’s guilt-tripping tactics and this whole terminal illness scam in general.

Plus, Wyatt has always been a pretty caring guy. That’s not a bad thing, but it does make him vulnerable to Sally’s devious strategy. Sally’s preying on one of Wyatt’s biggest weaknesses here. Like Liam Spencer (Darin Brooks), there’s part of Wyatt that wants to save damsels in distress.

Dr. Penny Escobar (Monica Ruiz) will delay the big reveal through her attack on Flo, but she can’t stop the shocker entirely. What happens once Wyatt learns Sally’s been scamming him? In horror, Wyatt may give Sally the opportunity to tell the truth once and for all. He might hold out hope that this is some sort of mistake, but it’s clear that the jig will be up for Sally soon.

Wyatt’s sure to face a flood of emotions as he copes with this terrible betrayal. There’ll be a rush of anger, sorrow, disgust and so much more. How could Sally have played Wyatt and let him dote on her like she was knocking on death’s door?

Wyatt may end up filing charges against Sally, especially after Penny’s attack on Flo and whatever shockers are next. The Bold and the Beautiful spoilers say Sally will try to explain, but there’ll probably be no hope for salvaging anything. Sally wanted Wyatt back, but he may be furious enough to completely cut ties instead!