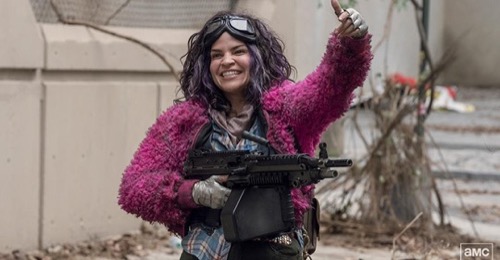 Tonight on AMC our favorite show The Walking Dead airs on an all-new Sunday, March 29, 2020, episode and we have your The Walking Dead recap below. On tonight’s The Walking Dead Season 10 Episode 14 called, “Look At The Flowers,” as per the AMC synopsis, “Heroes and villains reckon with the aftermath of the Hilltop fire. Meanwhile, Eugene takes a group on a journey to meet Stephanie, with the hopes of befriending another civilization.”

Tonight’s first season finale episode of TWD season 10 opens with us continuing from the last show when Yumiko, Ezekiel Eugene meets up with a new woman, fully loaded with a machine gun. She asks if they are going to hurt her, Ezekiel says no, Yumiko says if she keeps point the gun at them she is going to find out. She says she has been on her own for a year and it totally sucks. Her name is Juanita, but she prefers to be called Princess. She offers them supplies, but Eugene says they are on a mission. A few walkers show up and Juanita shoots them with a round on the machine guns, the trio’s horses are scared and runoff, Juanita tells them she is sorry.

They pack up on a few supplies, Ezekiel wants to take princess up on her offer for help, Yumiko wants nothing to do with her. Eugene thinks Princess is a few bananas short of a bunch, but there are no other options. Princess says that she has access to plenty of transportation in a garage. Yumiko wants her weapon, she gives it to Eugene.

Beta still has his herd following him, he leads them to a community that has a windmill in the center of it, and he is on a top balcony with two of the whisperers. Little does Beta know, Aaron is at the top of the windmill.

Daryl is out in the woods, he calls Michonne on the radio but she doesn’t answer.

Judith gives her condolences to Alpha’s mom, she asked her if she misses her and she says no.

Beta is on the move with one of the whisperers and when she mentions Alpha he pulls out his knife, but voices that he is hearing stop him and tell him to wait. Aaron radios Daryl and tells him that Beta and the heard are heading towards their seaside, as expected.

In the city, Princess is still leading the trio, Yumiko has no faith in her, Ezekiel thinks maybe Yumiko is right. All of a sudden, the horse is found, Yumiko says he may have stepped on one of the mines. They are standing in the middle of a minefield. Yumiko tells Princess she either gets them out of there safely or she will kill her herself.

Carol and Kelly are in a car, she says when she started losing her hearing her sister told her that it wasn’t her weakness, it was her superpower. She then goes to tell Carol she heard the stories about her in the old days, she goes off and does things that only she can do, that is her superpower.

Daryl is with Judith, he is teaching him to see things that someone may not see in the woods if they are not paying attention. There are a couple of walkers and they go to kill them, but when one gets shot with an arrow, it turns and runs the other way, it was a whisperer.

Yumiko tells off princess for leading them into danger, all of a sudden, they arrive at Fleetwood drive, Eugene realizes that she took them in a wild goose chase, they passed this drive before. Princess said she did it because she wanted them to stick around, she is sorry. Eugene puts his hand on her shoulder and tells her that he knows how she feels, he has made a lot of bad decisions too.

Daryl and Judith are on the hunt for the whisperer, it doesn’t take long for them to find her. She is a scout, she tells them that they are heading to the ocean and Beta has lost it after what he did to Alpha. She says he is going to keep coming for them. Daryl asks her if he knows where they are, she says she doesn’t know. Daryl shoots her with another arrow and finishes her off. Judith tells him that he didn’t need to do that, he says she had no information for them and she was going to die anyway, so might as well make it quick.

Beta is still walking with his herd, the voices are still talking to him in his head. Aaron is following the herd, they have changed direction and are heading towards the tower. All of a sudden, they are surrounded by whisperers.

Lydia tells Negan that he doesn’t get to tell her what to do. He tells her to hit him, she needs to mourn her or it is going to eat her up inside. She shouts at him and tells him off. She says she hated her, she hits him on the chest, he pulls her to him and hugs her. Lydia cries and falls into his arms.

Princess brings the group to the “wheels” in the garage, it is bicycles, not cars. Yumiko goes to speak to her, Princess says she is not a bad person. She blew it, and she is sorry, she wishes she had done things better. Yumiko asks her if she wants to join them, as long as she doesn’t lie to them again, Princess says yes and hugs her.

Daryl and Judith are still walking, Judith says she can’t believe they just left her in a ditch. She says she just wants them to be back together again. He says he radioed her mom, to tell her not to go home because it is not safe. She tells him that she doesn’t want him to leave as her mom did. Gabriel radios Daryl and tells him to come back it’s surrounding, but Daryl can barely hear him on the radio.

Beta and his herd arrive.