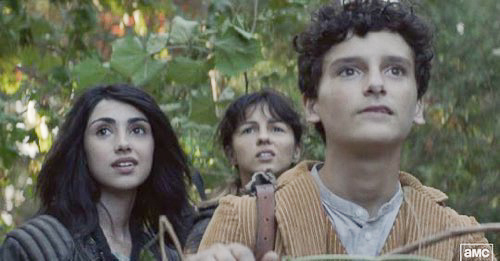 The group is still walking, Huck asks Silas why he is smiling, he doesn’t answer. Iris and Elton are talking about the Civic Republic, both of them think they are underground. Felix tells Huck that they don’t have much food and water left. Hope finds a spooky building; Felix encourages them to go inside, maybe they can find supplies. A storm seems to be coming. They are inside a high school, Felix says the place is huge and there doesn’t seem to be any empties inside. Silas and Elton find some trophies, they take them for weapons against the empties. They split up into groups; Elton and Felix, Silas and Iris, Hope, and Huck. Hope grabs clothes out of the lockers and stuffs them in her backpack. Huck keeps asking her questions and Hope tells her that she sounds like her dad.

We go back to when Hope was with her dad, she is in his office and he forgot to pick her up. He asks her what is going on with her because she lit stink bombs. She tells her dad at least he did well with Iris. He says the moment he laid eyes on both of them, he just wanted to protect them. He goes on to say that he loves her unconditionally and wish she could see herself the way he does.

Back to the present, Felix picks a door lock, he and Elton go inside one of the classes, they are looking for anything that collects water. Elton is taking pictures, they seem to be in a science lab. Felix tells him that there is research going on back home, where does finding Hope and Iris’ dad fit in. Elton says he is bound with them, then he finds a bottle of iodine. Outside the room, Felix sees some blood on the floor, he tells Elton that it wasn’t there before. Felix radios the others, but they don’t answer. Felix and Elton leave the area, we see an empty crawling out of a room and something quickly grabs it back.

Silas and Iris are in the gymnasium when Silas sees an empty on the other side of the door. The gym is all decorated for a holiday, Sadie Hawkins day. They go to head to the teacher’s lounge, but find the door locked, Silas says the door shifted and jammed due to water damage.

Huck and Hope are in the stairwell, Hope asks her about her father. Huck says fathers have a funny way of showing that they give a crap some times.

Back to Hope and her father, he tells her that he has to go, they need to trust the Civic Republic. Her father says teaching emergent minds is the way forward, it’s not the end. She promises to stop being a screw up if he stays. He says she is not a screw-up and that is not why he is leaving. When he comes back, they will talk, about the good stuff. He also tells her that he figured out how to communicate behind the Civic Republic’s back with her while he is gone; then he laughs, he can be bad too.

Felix and Elton are near the lockers when they hear noises, like an empty stuck in a locker, Felix says he is going nowhere even though Elton looks scared. Elton looks back to being a child, in a small area by himself, his hands over his ears and he is visibly upset. Felix tells him that if he cares for his friends, he will turn them around and go back. Felix shares with Elton that he lost his parents too, and others, friends; and he can’t lose anyone else.

Felix tells Elton that he needs his help to convince others to turn around. They arrive in another classroom and it is a mess with an empty trapped under debris and desks. Felix tells him they need to get going before the person that did this shows up. Meanwhile, Silas from some sodas under the bleachers, he shares them with Iris. Silas tells her that he was taught ballroom as a child, she tells him to get up, they are going to dance together.

There is a threat of wolves, Huck and Hope enter an area and quickly get through without getting attacked. Elton and Felix arrive at the gym, Felix knocks at the door for them to let them in, but the door is blocked. Felix tells them to stay where they are, they will come around to the other door and kill the empty; he goes on further to say there is something else in the hallways, and he doesn’t think it is friendly.

Huck and Hope find a supply room, there is an empty, Huck takes care of it as Hope packs some stuff in her backpack. Hope hears a sound, there is something coming through the vent system. Hope tells Silas they have to go, they have to kill the empty. She opens the door and the empty comes through, the two of them get out and lock the empty in the gym.

Silas and Hope are somewhere else in the school, he finds a flare to light the way so they can see. Empties come after them, they run into another area and lock the door behind them. They start to look around where they are, empties are everywhere, you can hear them. Hope hears someone whimpering, she recognizes Iris who then begs them to get them out of there. An empty comes near Silas and he stabs it in the head. He thinks back to his youth, he has blood on his hands and someone tells him that he should be in jail for what he did. All of a sudden, Silas goes into an uncontrollable rage on one of the empties.

Hope and Iris talk for a bit, but they obviously have a lot to work on when it comes to their relationship. Iris goes to comfort Silas, he asks her if she thinks he killed his dad. She says nothing matters, just that he saved them. The group is about to leave, packed with supplies, and Elton asks them to take a group photo.