BY Heather Hughes on February 25, 2020 | Comments: one comment
Related : Soap Opera, Spoiler, Television, The Young and the Restless 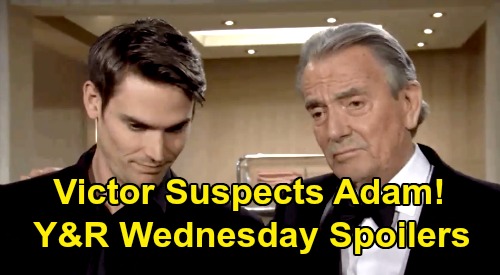 The Young and the Restless (Y&R) spoilers for Wednesday, February 26, tease that Chelsea Lawson (Melissa Claire Egan) will focus on the future. Y&R fans know the Newmans are facing some turmoil right now, so Chelsea and Adam Newman (Mark Grossman) have been wrapped up in that. Victoria Newman (Amelia Heinle) is still in a coma, but the world has to keep spinning.

That’s why Chelsea will take some important steps forward on Wednesday. Victoria’s ordeal was a wakeup call for several characters, including Chelsea. The hotel wasn’t Chelsea’s dream and life’s too short to waste time fighting for things you don’t really want.

Chelsea has mentioned getting back into fashion several times, so that may be part of this new vision for herself on Wednesday’s new Y&R episode.

Perhaps Chelsea will get back to designing and make plans for a new fashion line. She’ll be hopeful about what’s ahead, especially since Adam recently proposed. Chelsea and Adam will have wedding planning on their minds soon enough. They’ll be eager to tie the knot again and officially kick off a brand-new “Chadam” chapter.

In the meantime, Adam will concentrate on a different aspect of the future – most likely one involving business. Chelsea was concerned when Adam brought up his interest in returning to Newman Enterprises. She feared it would seem opportunistic if Adam moved too fast.

Adam held off for a bit, but he knows Victor Newman (Eric Braeden) will need someone to step up for Victoria quickly. On Wednesday, Adam may decide to go ahead and bring up the comeback possibility. He won’t want to be pushy about it, but he’ll at least let Victor know his services are available.

Sadly, The Young and the Restless spoilers say Adam’s motives will be questioned. His attempt to help seems genuine, but Victor may not see it that way. Although Adam and Victor are working toward a stronger bond, the trust between them isn’t solid just yet. Adam may be hurt if Victor thinks this is a power grab meant to exploit Victoria’s suffering.

Whatever the case, The Young and the Restless spoilers, updates and news point to more drama for the Newman clan. Adam and Victor’s feud may be far from over, particularly once the CEO spot’s handed to Nick Newman (Joshua Morrow). That could spark quite a war with Dark Horse, so some interesting business stories are coming up.

As other Y&R news and updates roll in, don’t forget to check CDL often. We’ll be sure to have all the hottest Young and the Restless spoilers and recaps for you.