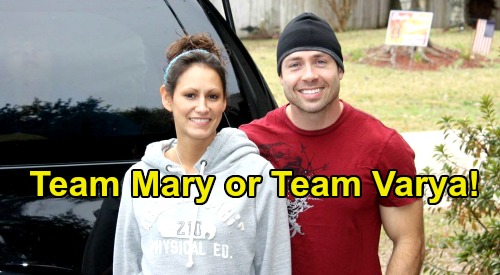 TLC 90 Day Fiance: Before The 90 Days spoilers tease that Geoffrey Paschel got a huge surprise…and so did his new girlfriend Mary. As viewers know, on the show, Geoffrey recently returned from Russia where he was visiting his online love Varya Malina. This came after a big goodbye scene at the airport in Russia during which Varya told Geoffrey that she didn’t want to end things or say goodbye.

However, Geoffrey continued on and left Varya sobbing at the airport. From Geoffrey’s perspective, Varya had proved that she wasn’t “all in” the relationship when she turned down Geoffrey’s marriage proposal. That pretty much ended things for Geoffrey, and he decided to head back to the US and make a clean break form Varya.

Geoffrey stated several times on the show that Varya had reached out to him and that she had been texting him, but that he hadn’t responded to her. And at the same time, Geoffrey decided that he would explore his options with his friend Mary. He and Mary had dinner together, and Geoffrey inquired as to whether Mary wanted to be more than friends. Mary said that she wanted a relationship with Geoffrey, and with that, Geoffrey moved on.

Well, as viewers know, about this time, Varya decided to come to the US in a surprise visit to see Geoffrey. Totally unaware that Geoffrey had moved on with Mary, Varya trekked out to Geoffrey’s home with all her luggage in tow, because she was sure that Geoffrey was going to invite her to stay with him.

But it was a tense scene as Varya showed up on Geoffrey’s doorstep, hugging and trying to kiss him. And then, it happened. Mary emerged from inside the house wondering what was going on. Geoffrey haltingly said that he didn’t know that Varya was coming or what she was doing there, and then both women realized what was going on. Awkward.

This is quite the turn of events, and Geoffrey is now smack dab in the middle of these two women, with things looking like they’re going to escalate quickly. In fact, the previews for Sunday’s all-new episode of Before The 90 Days show Varya and Mary getting a bit heated with each other, as Geoffrey doesn’t really know what to do.

Well, someone is going to walk away from this scenario victorious (i.e., with Geoffrey). It’s really hard to imagine Mary up and leaving at this point, so Varya might be the one to hightail it out of there, but you never know. Varya could put up a fight and refuse to go until Geoffrey hears her out.

One thing’s for sure – this is going to be quite a scene. Who do you think will end up with Geoffrey in the end – Varya or Mary? Stay tuned to 90 Day Fiance: Before The 90 Days and be sure to keep CDL bookmarked so you don’t miss any of the hot 90 Day Fiance show recaps, news, or spoilers!