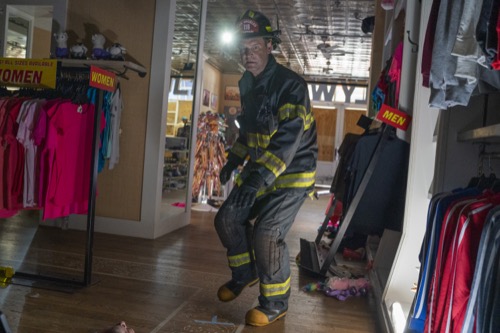 Tonight on FOX their #1 drama 9-1-1 airs with an all-new Monday, September 27, 2021, season 5 episode 2, “Desperate Times” and we have your 9-1-1 recap below. In tonight’s 9-1-1 season 5 episode 1 premiere as per the FOX synopsis, “The 118 springs into action when a citywide blackout and a record heatwave causes mayhem in Los Angeles; Chimney confides in Hen about Maddie’s condition; Athena’s worst nightmare comes true.”

9-1-1 continues tonight after a series of ransomware causes serial rapist Jeffrey Hudson to escape. The Emergency helicopter is preparing to make a landing on the roof with an organ for transplant, suddenly the city is in a blackout, and the helicopter lands precariously on the side of the building. The crew has no time for the generators and heads for the roof. Capt Bobby Nash (Peter Krause) and Evan “Buck” Buckley (Oliver Stark) rush towards the helicopter as Henrietta “Hen” Wilson (Aisha Hinds) climbs in, telling Manny to hang on as she promises to get him out of there. The chopper shifts and he looks terrified.

Howie “Chimney” Han (Kenneth Choi) explains what they are going to do, able to flip Manny onto the board, he can feel his fingers and toes. They use the fire hose to strap the board secure but before they can get him out he pleads about the transplanted heart; they say they have to come back for it. Bobby looks down and the crew tries to stabilize the helicopter so he can get the heart; the cable gives way and the chopper crashes but Bobby and the heart are saved.

FOUR DAYS LATER
The news reveals the death toll has reached 15, mostly due to heat exhaustion; cooling centers have lost power, and hospitals and overwhelmed. Meanwhile, Michael Grant (Rockmond Dunbar) is on the phone with Athena Grant (Angela Bassett), who is having a party with the neighbors as they are the only house with power in the neighborhood. He praises how great the community is. She has no idea when she is coming home but they hang up when Harry Grant (Marcanthonee Jon Reis) is caught with money, learning he has been charging neighbors $5 each to be there. His dad reminds him they are trying to help people, not take advantage of them.

Athena arrives at the ER, called in by Dr. Zimmerman. She has a patient whose throat had been cut, no wallet, and no ID. They didn’t think he was going to make it but he woke up long enough to write her name. It is Det Lou Ransone (Sasha Roiz). Athena is clearly shaken as she says his name.

At the precinct, they learn the jail systems are down. Athena is furious that Lou has been in the hospital for 5 days and Jeffrey Hudson (Noah Bean) should have been in custody for 5 days now. She is kicking herself for not double-checking it. They learn that Jeffrey Hudson is not in his cell, never making it back to central. No one has heard from his lawyer Lila Risco (Carly Nykanen), which is no surprise since she was there when he was arrested.

At the firehouse, Howie learns they are losing fridge privileges, asking if he can use Hen’s charger; but she informs him that it is department issued and she cannot share it. Howie bribes Buck into giving him a charger, saying if he doesn’t give him one, he will never see his niece again. Meanwhile, Ana Flores (Gabrielle Walsh) comes to the station with Christopher Diaz (Gavin McHugh) so he can see his dad, Eddie Diaz (Ryan Guzman); bringing him some food. Buck and Ravi (Anirudh Risharody) meet Christopher, but when Ravi asks if Ana is Eddie’s wife he begins to have a panic attack.

Capt Elaine Maynard (Claudia Christian) and Athena arrive at Lila’s place with SWAT, quickly learning the house is clear, but they do find Lila is dead from a gunshot to the chest. He didn’t take her car and Athena feels like he didn’t have any “accomplice” other than Lila and he wanted to save her but she didn’t want to be saved. She firmly believes that a city gone dark is the perfect hunting ground for him. Athena doesn’t want to warn any of his victims at all.

Bobby and Buck talk about the call they are about to go on, all they know is this is a break out from the zoo. Buck reminds them they have some serious predators at the zoo and what kind of gear are they supposed to bring to this kind of call. As they walk through the streets, they see ostriches, eagles, elephants, monkeys. They know there was an animal attack but they have no idea what it was.

They find a man who can’t tell them what kind of animal it was, only that it sprayed some kind of poison at him. They tend to him and send Eddie inside with Bobby to find Ivan who is the shop owner and still missing. Ivan is on the ground covered in blood and missing part of his ear, but standing between them is an alpaca. Bobby grabs a bag of popcorn in hopes that it will eat it, considering it to be “greens”. Hen attempts to distract the alpaca with the food but Ivan keeps making noise, Bobby tells him to grab his wrists and drags him across the floor; unfortunately, Hen starts making loud noises and he stops. Bobby wants to know why he isn’t attacking and Hen says because it’s calling its friend; they both dart out the door, causing Buck to make fun of them for running from an alpaca.

A mother sits with her son, Luke who is on a respiratory, saying the doctor feels he just has to get over this infection and he will be back to breathing on his own. He just wants to be able to watch a Dodgers game. She suddenly realizes that his ventilator is on a low battery and that is the backup battery; May Grant (Corinne Massiah) takes down her information, saying it will be at least an hour or 2, but May is told they don’t have that kind of time and she is intubating him now as he is only 12. May looks at the board and comes up with an idea. She notices that a close neighbor has solar panels and calls her, explaining the situation; the whole neighborhood uses extension cords and Christmas lights to rescue the little boy, Luke. May calls her back and tells the mother not to freak out when help gets there.

Buck interrupts Eddie who was trying to nap, questioning about his chest pains. He needs to know and Eddie finally admits it was a panic attack. He denies it wasn’t being shot but it is Ana. She is a godsend but the ready-made family is not something he is ready for. He is going to stick it out and his kid loves her, but Buck questions if that is enough. Buck feels Eddie needs to be honest with Ana.

Howie calls Maddie Kendall (Jennifer Love Hewitt), checking up on her and for her to call him when she can. He notices his concern and he finally opens up about her postpartum depression and how she feels like a failure and he is hovering. He reminds him that Maddie is his partner, not his patient and he needs to stop trying to fix her. Meanwhile, at home, Maddie falls asleep while giving the baby a bath, terrifying herself.

Maddie brings the baby to the hospital, with no injury to her head and no fluid in her lungs. The doctors feel she will be fine; while Maddie is shaky, the doctor says she should have a good night’s rest as she leaves to file the paperwork and she will feel like this until her kids are adults, especially every time her kids have an accident.

Athena is sitting in her car with binoculars when Bobby calls her. She reveals she is sitting outside a woman’s home, waiting for Jeffrey to come there without even warning her. She feels she is fulfilling the prophecy of being a rogue cop. She is surprised that he agrees that he hopes she comes face to face with the dangerous offender tonight and to make sure she doesn’t shoot him just in the leg. Elaine comes to join her, leaving her credentials behind, saying this is personal and she is relieving her. She orders Athena to leave because Lou is awake and asking for her.

Athena arrives at the hospital, to see Lou alert, in pain but awake. She tells him to reserve his strength. She reveals they found Lila dead and she figured out that it was her who slit his throat and she is sorry she wasn’t there. They don’t have leads on Hudson and they do have units posted at all his victim’s houses. Lou tells her that they need units posted at her house as she is a victim too.

At her house, Michael is enjoying the party with the neighbors, completely oblivious that Harry is playing Jenga with Jeffrey in their very backyard. Bobby’s phone goes off and it is Athena. She asks him if he can get to the house as neither Michael nor Harry are answering their phones. He realizes what she is saying and realizes she is one of Jeffrey’s victims too and races out the door; putting Howie in charge.

Elaine orders Athena not to go in the house alone and Athena reminds her that she doesn’t have the luxury to do that. She gets out of her car, gun drawn, calling out for Michael. Michael comes in the back door with his hands up, as she demands to know where everyone is. He says the generator went out and everyone left. The lights come back in and Athena demands to know where Harry is and his phone is right beside the game on the table.

On the streets, Jeffrey Hudson is stopped at a roadblock but has a badge and is allowed through but Harry is in his trunk.