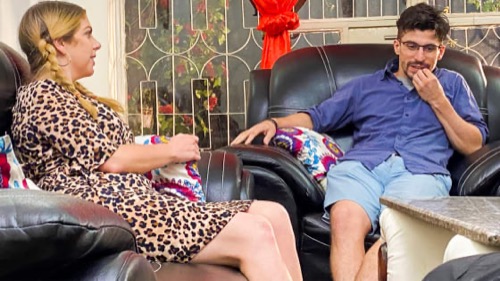 Tonight on TLC their popular reality show 90 Day Fiancé: The Other Way airs with an all-new Sunday, September 5, 2021 episode and we have your 90 Day Fiance: The Other Way recap below for you. On tonight’s 90 Day Fiance: The Other Way season 3 episode 2 “Testing Trust,” as per the TLC Synopsis “Ellie has surprising news to tell her friends. Ari’s ex-husband makes a big impression. Steven quits his job, while Alina prepares for her move. Kenny and Armando finally start planning their wedding. Jenny has only one option left to stay in India.”

Jenny didn’t have money like that. She couldn’t keep affording the trip and Sumit couldn’t travel with her. His passport was taken by his former father-in-law. He couldn’t leave the country without it and so he couldn’t go to Nepal with Jenny. He couldn’t visit America to be with Jenny. It was just her that had to leave and she couldn’t take it anymore.

The time to marry her is now. She wouldn’t have to return to her country every six months if she was on a spousal visa and so Jenny laid down the law. She said if she goes back then she has no reason to return to India. Especially not when Sumit refuses to marry her. She wasn’t the one that first brought up marriage. He did and he promised to marry her and then never did.

He’s been dragging his feet about the issue for years. Sumit couldn’t even come up with excuses anymore. He says he’ll marry her and afterward he never gets around to it. It could be a whole sort of reason. It could be his parents. His parents have threatened to cut all contact if he marries Jenny and so that could be holding him back, but if so, he should say something and not just keep promising because that had gotten old.

Then there was Ari and Biniyam. The two were engaged and living together in Ethiopia with their infant son. Ari was starting to feel homesick so she invited her ex-husband to come to visit. Ari and her ex-husband Leandro were best friends. They only got divorced because Ari had admittedly been immature. She thought she wanted to travel the world and Leandro wanted to build a future in one place.

He was working on his doctorate. He couldn’t just pack up and go at a moment’s notice while Ari could. Ari always thought the two of them would get back together in spite of their divorce. Then Biniyam happened. She met him while on vacation in his home country and they got pregnant. Ari had the baby. She and Biniyam got engaged and now they were living together. Only Leandro remained her best friend.

But it’s Alina’s choice. She decided to be with Steven and at least the two weren’t getting married. Evelin and Corey were getting married. Evelin didn’t really want marriage at first and now she wants to have a celebrity wedding. She wants to hire a celebrity wedding planner. This wedding planner is telling them their wedding could be anything from twenty-six thousand to fifty thousand dollars and Evelin didn’t want to split the costs. She wants Corey to pay for everything.

She said it was the tradition in her country and now Corey is up the creek. The same Corey that doesn’t have that kind of money to spend on a wedding of all things much fifty thousand in a third world country. Corey thought Evelin was being ridiculous in wanting to spend so much. His brother got married in the States for five grand. Corey thought that was acceptable.

Kenny and Armando are also getting married. The couple was back after last season and they were getting married. Finally! They had to delay their wedding because of the pandemic. Only they’re back to planning now and Kenny wants a big wedding. He wants to invite a hundred people to it and that includes his family. Armando’s family didn’t approve of him being gay. His mother was also refusing to tell his father he was engaged to a man and so his father might not know.

Armando and his father weren’t speaking. His father refuses to acknowledge Kenny. He didn’t even come out to meet when Kenny visited the family home and both men have had to come to terms with the fact that Armando’s father won’t play a part in their lives. Armando was getting married and he wanted a huge wedding. And Kenny has had to watch Armando’s vision board get bigger and bigger.

Then there’s Ellie. Ellie was giving up her whole life to move to a small country and be with a man named Victor. Victor has accepted money from Ellie. He has cheated on Ellie. None of Ellie’s friends see his appeal or know why Ellie is giving up everything to be with him. They tried to talk her out of it. They tried to reason with her and in the end, she regretted telling them about Victor’s cheating because she suspects if she kept to herself her friends wouldn’t have so much to say.

But it wasn’t just cheating. Victor carried out a whole other relationship with someone else and he could still be doing that. Her friends suspected he never stopped. They all think he found another local girl to sleep with him and that he’s using Ellie for money. She is well off. She may have never discussed her financials with him but it doesn’t take much to guess.

Ellie visited his country frequently. She was able to afford to visit five times. She also told him that she owns her own business and she gave him five thousand dollars to do repair work on his house as well. Five grand may not be much to her, only to him it might look like a fortune. Ellie is a woman whose well-off and Victor knows it. He could be manipulating her for her money.

Else why would he enter a relationship with another woman and still accept money from Ellie. Ellie is his sugar momma. The only person who doesn’t know that is her. Poor Ellie thinks she’s in love and the last time she had that was with her late husband. The same husband that tragically died less than a year into their relationship and so that could be why Ellie is rushing ahead with this guy. She could still have that fear that something will happen to end her happily ever after.

This fear could also be blinding her to the point she doesn’t realize her happily ever after isn’t with Victor. She had a bad dream about him impregnating another woman and she told him about it because she wanted to make sure the woman he cheated on her with was on the island. He said the other woman was gone. He also told her about an impending hurricane and so once again she was preoccupied with his safety to the point she didn’t ask how he knew the other woman was gone.

Then there’s Jenny and Sumit. She applied for an extension again and she received it this time. The two of them also met with an immigration lawyer. They wanted to know their options in the future and Jenny was asked if she would forsake her American citizenship. She said she refuses to do that. She was up there in age and she was receiving benefits of her hard work.

Jenny didn’t want to give that up. She also didn’t want to become a hare, Krishna. The religious aspect would keep Jenny in the country but she would have to sign up for a religion that got a bad rep back in the States. Jenny had to tell the lawyer she’d think about it. Only there remains one other option. Sumit could marry her and she can finally stay for good. Jenny doesn’t want to change religion when the easiest option would just be for Sumit to live up to his promise.

Sumit however was seriously considering the new religion for her. He truly was willing to do anything, besides marrying her, to keep her in the country. Armando and Kenny don’t have that problem. They were getting married and they were having a legal wedding. They finally got their license. They now were speaking with the wedding planner and going over details of their wedding.

Alina and Steven were at different stages of their lives. They were moving to Turkey to be together and Steven was in charge of the arrangements. He booked separate places to stay. Steven knew that Alina was going to baptize in his faith and so he doesn’t think cohabitation is wise before then. He also said they couldn’t have sex before marriage.

He thought living with Alina was going to be a trial and that’s why he was trying to play it safe by booking separate living arrangements but he wasn’t being completely honest. He has had sex before. He didn’t always follow the teachings of his faith and he has bent the rules before but he doesn’t want to bend them for Alina.

And Biniyam wasn’t being irrational when he got upset that Leandro gifted Ari some bras. Ari had apparently asked Leandro to bring them for her because she hasn’t found a brand she likes in Ethiopia and, while she was at it, she also apologized to Leandro for the way she ended things between them because it had been unfair to him. And so she got emotional and Biniyam got angry.