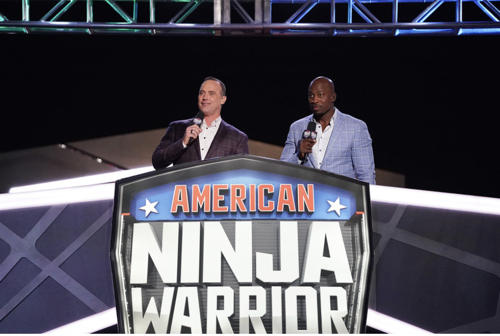 In tonight’s American Ninja Warrior episode, it’s Night Three of the National Finals! The final competitors were going through Stage Two and whoever survived would go onto Stage Three and hopefully Stage Four. The teenagers have been the story all season and so the night started with one of them. Isaiah Thomas was the first tonight. He was known as “flyboy” and that’s what they chanted as he made his run.

He was one of the Texan ninjas. He was a protégé of ninja veteran Karsten Williams and his training showed as he made it all the way to Air Surfer when he fell. He tried to go too fast and that’s what hurt him in the long run but he’ll learn from this and come back next season. Next up was Adam Rayl. He was a veteran ninja and one of the favorites to win it all this year.

Adam has changed up his training. He’s now training with his friend and fellow veteran ninja Sean Bryan. They’re both gymnasts. They push each other to be better and so Adam’s new training regime has gotten him to the National Finals but he was making risky moves on Stage Two. He almost fell several times in the beginning. His mother Vicki was a nervous wreck on the sidelines. She was anxious the whole time and she broke out into tears when her son made it to the final obstacle only to fall. Adam was racing against the clock and that’s what cost him. The ninjas were trying to be fast because there was literally a time clock on how long they have to take and no one wanted the clock to run out on them.

But racing against the clock was costing good ninjas their chance at the million-dollar prize. Next up was Enzo DeFerrari Wilson and he was the youngest ninja to complete Stage One. He wanted to be the youngest to complete Stage 2 and unfortunately, he never made it that far. Enzo or “electric Enzo” as he is known had tried to go against the clock. He ended up falling on V Formation and he’ll have to wait until next year to try again at the prize. Next up was Austin Gray.

He was the “Share Your Spare” ninja. He donated a kidney to someone in need and now he advocates for people still waiting on the donor list. Austin was a roommate to several other ninjas and so there were there to cheer him on tonight. He also coaches young teenagers who compete in “American Ninja Warrior: Juniors”.

Austin has had a great season. He came close to almost winning the prize last year and so he was hoping to get it this year. He went fast but he didn’t get sloppy. He took precise movements and he became the first finisher of the night. He’ll get his chance at Stage Three and hopefully, he won’t be the last. Next up Josiah Pippel. He was another teenager and he was doing really well for himself this season.

He was going fast yet he wasn’t speeding. He was taking his time and he got really close to completing the stage when he fell on literally the last piece of the last obstacle. This loss might stay with him for a while. Next up was Joe Moravsky is otherwise known as “the weatherman”. He was a veteran ninja and he had a safety pass that he, unfortunately, had to use on Stage 1 because of an unexpected fall.

Only tonight held a shocking fall as well. Joe fell on the first obstacle and his season is officially over after that surprising upset. He was the ninja with the most experience in Stage Two but now he was out and it was up to those less experienced to compete. Next up was Kyle Soderman. He grew up in Minnesota in a rock garden. It was basically one giant ninja training area and it helped him develop skills he went on to use as a stuntman in LA. Kyle is also tall.

His muscles meant he was one of the heaviest ninjas of the night and so that came in handy during the upper body obstacles. Kyle sped through the course and he became the second finisher of the night and third overall. Next up was Jake Murray. He was one the funniest ninjas around because he was never afraid to crack a joke at any stage and so tonight was different for him because he was completely serious.

Jake made it all the way to the last obstacle when he fell. He spoke with Zuri afterward and he admitted that if he didn’t make it this season that he was going to take some time reevaluate. Next up was Jesse Labreck is also known as “flex labreck”. She wanted to make history as the first woman to make it to Stage Three and unfortunately, her night came to a close much too soon. She fell on the Salmon Ladder. Next up was Kaden Lebsack. He was a protégé of Jake Murray’s and the two trained together. Jake even watched from the sidelines as Kaden had his run. The teenager showed early promise as he steadily made his way through the obstacle course and his patience yielded great rewards because he later became the next finisher of the night.

Kaden was the youngest to ever hit a buzzer in Stage Two. He was also the final competitor for Stage Two. Next up was Stage Three. Up first was Vance Walker. The teenager was a winner on “American Ninja Warrior: Juniors” and now he wants to win the adult version. Vance didn’t have to worry about timing this time because there was no countdown clock for Stage Three and so tonight was the most careful he’s ever been. Vance was doing great. He made it all the way to the newest obstacle when he fell but there’s still a chance he can compete for the million-dollar prize. It just depends on how the others fair in Stage Three. Next up is Kyle Soderman. He was doing well until he met with the Ultimate Cliffhanger. That obstacle had him holding on with just the tips of his fingers and so it was the worst weapon for the heaviest man left in the competition.

Next up is Austin Gray. He did his best to preserve his energy by making as few moves as possible and unfortunately, he had some trouble with several obstacles. Most of the obstacles require upper body strength. It tends to wear someone down after a while and that’s what happened to Austin. He had almost fallen several times before he actually did fall.

He fell on the newest obstacle and he will have to wait to see if he made it far enough fast enough to win the runner-up prize of a hundred thousand dollars. Next up was Kaden Lebsack. The teenager became interested in ANW when he was small and it had taken some convincing before his parents came around to the idea. Up until then, they had only seen him play basketball and he hadn’t been any good at it. Kaden was a much better ninja than he was a basketball player.

He was so good that his parents built a ninja gym. They helped train ninjas and that includes their son. Kaden was a formidable opponent. He proved that tonight as he sped through the obstacle course and he became the first person to hit a buzzer on Stage Three. Now for Stage Four! Kaden was the only one to make it to this stage and so he was the only one in the running for the full million-dollar prize. Kaden gave the final obstacle his all but he ran out of steam because he had been only using his legs and so he failed to press the buzzer in time. But he did win a hundred thousand dollars and that was nothing to sneeze at. Especially not a fifteen-year-old.