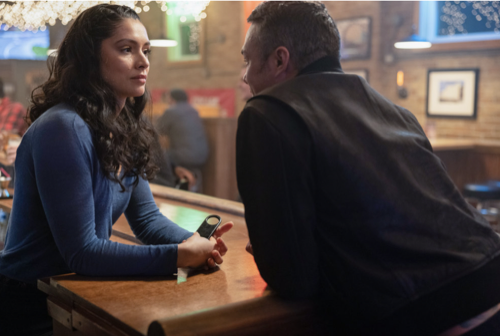 Tonight’s Chicago Fire season 9 episode 10 looks like it is going to be great and you won’t want to miss it.   While you’re waiting for our recap make sure to check out all our Chicago Fire recaps, news, spoilers & more, right here!

In tonight’s Chicago Fire episode, Casey tells Gallo that the headaches stopped, he doesn’t need to worry. Brett overhears and asks him what up, he says he is better. The alarm goes off, the crew answers a call and finds a man shouting in pain, he seems to be stuck in a stairwell to a cellar. His wife says a delivery arrived and the next thing she knew her husband was screaming. His arm was stuck in a conveyor roller, Casey pulls it out and tells him it is going to hurt. They get him loose and Mouch pulls him up on a stretcher. He says he thinks his arm is busted, they take him to Chicago Med.

Back at the station, Herrmann knows that Ritter broke up with his boyfriend, he tells him that he wants to set him up with a friend of his.

Severide talks to Casey and Kidd about the class he is giving, he says Jacob Mercer is giving his all but scares the hell out of him being in a CFD uniform. Casey says you either have the fire fighting gene or you don’t. Kidd says there is a lot of raw talent out there and you would be surprised who will rise to the occasions.

Chief Boden calls Severide to his office to meet an old friend of his, Chief Gary Mercer who says he has heard a lot about him, from his son and would appreciate his keeping an eye on him. Severide says he is a hard worker and always the first to volunteer for a drill.

Cruz gives Mikami a note that is for her, it was left on the squad table. The note says, “that fall wasn’t an accident.” Mikami is wondering why her name was on the envelope. Brett tells her to ask Ronnie, the victim who fell.

Severide gives the class a quick drill, they have to find a hot wrench and Mercer finds it but doesn’t put protective gloves on before looking for it and burns his hand. Kidd tells Severide that Mercer doesn’t use his best instincts.

Brett and Mikami head to the hospital to see Ronnie and he has already been discharged. At the same time, Brett finds out that Casey didn’t go to the hospital for his headaches.

Herrman gives Ritter, Andy’s phone number and tells him to have a good blind date.

Chief Boden tells Brett and Violey to go back to the deli and check on Ronnie. Once there, they check on him and his wife just made him a fresh coffee. His wife says she asked him to take it easy. Ronnie says he doesn’t know if he slipped or tripped. Brett asks if someone could have pushed him, he says maybe but he doesn’t know. They dig a little deeper and find out that a guy is trying to force Ronnie to sell the place, but he won’t.

Chief Boden speaks to Severide about his class, he tells him that Mercer’s son has a lot of puppy dog in him. Severide says he is not a firefighter, he can teach him how to kick in a door, but he can’t teach him firefighter instincts. Boden says he will back him up, no matter what he has to say.

Severide says he is going to give Mercer another chance, Kidd asks him if he is pressured to do it. Severide says if he bounces him it will cause trouble, so one more chance.

Brett goes to see Casey, she tells him that she saw Will at med, and he mentioned the headaches were for a friend, and he said it was important to see a doctor with symptoms like that. He thanks her for checking on him, but says he is fine.

Ritter is on his blind date, when the guy starts acting controlling, Ritter says, “you are that Andrew, you dated Eric before me.” Andrew says he is easy to forget. Ritter says he put Eric through hell and he didn’t deserve a single day that he got to spend with him. Ritter gets up and walks out.

Brett and Mikami show the note to Ruzek, he tells her that he wouldn’t make a big deal out of it unless something else happens, maybe someone is just trying to stir up trouble.

Severide is working with his class, Mercer shows up unready, his hand bandaged. One of the rookies tells Severide that her mask smells funny, he smells it and asks Mercer what he did, the tanks are filled with carbon monoxide. All of a sudden, one of the guys Severide sent inside the building on a training mission, comes out and passes out. Severide runs, he saves the first one, yells at the team to get help, Mercer to open all the windows and doors while he goes inside, without a mask, smoke everywhere, to save the other guy. Inside, the other guy is passed out, Severide gets him out safe and when he is outside, he notices that Mercer hasn’t even moved.

Severide is in with Boden, he tells him what Mercer did, there is a warning sign near the machine, it is lucky he didn’t kill anyone. Severide says this one was on him, he was trying to avoid a tough decision.

Brett tells Casey that she can’t back off, he needs to go see a doctor, she wouldn’t forgive herself if something happened to him.

Ritter tells Herrmann and Mouch that his date was the worst of his life, he is a narcissistic know it, and he dated Eric. Just then, Eric comes into the station and says he heard that he had a date with Andrew. Ritter says he is something. Andrew thanks him for going to bat for him and that, he misses him. They smile at each other.

Mercer’s father comes into the station and starts yelling at Severide, and tells him that his teaches days are done.

The alarm goes off, there is another call to the deli. Once there, Brett and Mikami find Ronnie passed out on the floor. His heart rate and BP are low. Mikami doesn’t think he was pushed down those stairs, she thinks he fell because he is being poisoned. They take Ronnie out on a stretcher to Chicago Med, Mikami tells Brett to call Ruzek.

Chief Boden tells Severide that he heard what Mercer did to him and it is his problem, he will take care of it, he crossed the line and he will pay for it. Severide tells him that it is his mess, he will clean it up.

Ronnie is in the hospital, Ruzek is there and Brett tells him there is a half-eaten muffin in the deli, they need to check it to see if there are any poisons in it. The owner of the muffin store next door says that it is Ronnie’s wife who was poisoning him, she wanted him to sell the place, she told him to make an offer.

Severide goes to see Mercer, he tells him he knows that he wants the best for him, he is a good kid, but he is not a firefighter. And, the mistake he made, was to give his son too many chances, he should have cut him sooner.

Severide meets Kidd in the bar and tells her that Mercer is backing off, he is still going to have his teaching gig. Casey asks Brett to talk, he thanks her for pushing him the other day. He says he can’t help thinking when he got that head injury a few years ago, the doctor said if it happened again, it could end his career.