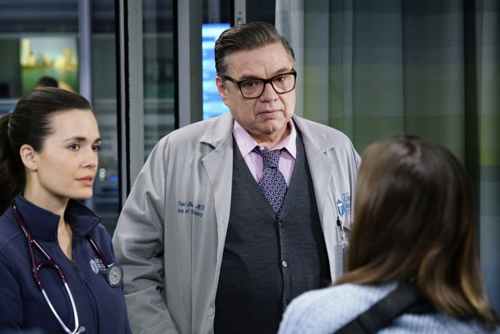 Tonight on NBC their medical drama Chicago Med airs with an all-new Wednesday, March 31, 2021, episode, and we have your Chicago Med recap below. In tonight’s Chicago Med season 6 episode 10 called, “So Many Things, We’ve Kept Buried,” as per the NBC synopsis, “Crockett deals with a patient who ends up having more in common with him than he thinks. Will and Ethan clash over a pregnant patient with an irregular heartbeat.”

In tonight’s Chicago Med, Maggie wanted to find her daughter she put up for adoption. She didn’t regret the adoption. It was the right thing at the time because she was only a teenager when she found out she was pregnant and, by the time she learned of it, it had been too late to terminate. She had the child.

It was a girl and Maggie gave her to a family that could provide for her. Maggie has always thought about her daughter. She’s always wanted to know if she made the right decision or not and now was the best time to check. Maggie almost became a parent again. It reminded her of what she lost with her daughter and so she reached out to a program that helps biological parents find their adopted children.

Maggie received a letter back. She was too nervous to read the letter when it came and so she ended up bringing it to work with her. Maggie’s good friend Goodwin knows about her daughter. The two talked about it and Maggie mentioned she wanted to track her child down, but Goodwin had cautioned her. She believed that with all the time that had passed that it might be too late to have a relationship with her daughter.

She also was wary because there was no telling what the daughter would say to Maggie or if Maggie’s daughter wanted to see her at all. Goodwin cares for Maggie. She doesn’t want to see her hurt again so soon after she lost Auggie. Auggie was the little boy that Maggie almost adopted and she gave him up so that he can be adopted by the same good people that had adopted his half-brother.

Maggie hasn’t been the same since she let go of Auggie. She was now looking for her daughter and Goodwin didn’t think any good could come of it. Elsewhere in the hospital, a pregnant woman was brought in by her adult daughter. It turns out the daughter Katie was the biological parent of the baby.

Her mother was simply acting as a surrogate because Katie and her husband couldn’t afford an official surrogate and so they turned to someone they knew who was willing to do it and it was her mother. Her alcoholic mother. Her mother has been clean for two years now. She’s also in her fifties and there could be a whole of medical complications. Choi and Halstead were the doctors on the case.

They were the ones that treated Mary after she passed out in the lobby. Things between the two men haven’t been the same since Choi was promoted over Halstead and now they were competing against each other for Dr. Virani’s affections. Both men were interested in her. She’s also showed interest in both men and so it was slowly turning into a love triangle.

Which wasn’t helped by the fact they all worked together. Virani took a special interest in Mary because it was clear Mary was suffering from a heart issue and they couldn’t determine what that was. Halstead and Choi worked together because they claimed they wanted to help Mary when in actuality they seemed like they both wanted to be the ones to save the day. And the men wanted to be heroes and they wanted Virani to see it.

There was also another issue going on at the hospital. This time it was with Manning’s patient and unfortunately, it looks like her patient Emily was being abused. Emily came in with a broken arm. She claimed she was mugged and so both Manning and Emily’s husband Brian convinced her to report to the police.

The police were called. They took notes and they couldn’t evidence of this mugging. There was no footage of the area Emily claimed to be in. There was however marks on Emily’s husband Brian and Brian couldn’t say where the marks came from. Charles spoke with Brian. Brian mentioned how he hasn’t been sleeping well and that he recently returned home from combat. Brian recently retired from the military.

Brian also wasn’t reading a typical abuser. He genuinely seemed to care for his wife and yet her “accidents” didn’t start until after he came home. Manning has heard from East Mercy. Emily has been to the Emergency Room twice in the last month. The doctors later tried to ask her if she was being abused and she denied it.

She also asked them not to tell her husband and that raised some red flags. Charles wanted to know why her husband wouldn’t already know about her injuries. If he was the one doing it, wouldn’t he know? Charles quickly realized the only way for Brian to be unaware of what’s happening is if he’s doing this in his sleep. Brian said he couldn’t sleep and what he thought was nightmares could possibly be him confusing the enemy with his wife.

Charles and Manning worked out a way to approach Brian while Halstead and Maggie’s choices clashed over his decision to treat Mary. Halstead believes an experimental drug could help save Mary and the baby’s life. He wanted to use it and Choi hadn’t. Choi thought they should stick to the medication. Virani on the other hand had liked Halstead’s plan and she spurred him into approaching Mary anyways. Halstead approached Mary with Maggie in the room.

Maggie overheard him list the benefits and possible dangers of this experimental drug he wants her to try. He also suggested she waits until her daughter comes back, but she doesn’t want to wait. She wants to save the baby no matter the cost to herself because she thinks it will help repair her relationship with her daughter.

Mary was an alcoholic. She’s been one since her daughter was young and so her daughter had to raise herself. Now, Kate wants a baby. Mary wants to give her one and she’s talked about it with Halstead. She’s asked him to keep the baby alive even if she’s not. Halstead agreed to do everything he could and Maggie was worried.

Maggie didn’t want Mary to die just so that she can make things up to her daughter. Maggie sympathized with Mary and that’s why she tried to talk Halstead out of giving her the drug. She didn’t think it would work out. Yet, when the time came, Maggie supported Mary as she took the drug and she stopped Choi from interfering. The drug ended up working. Mary was going to be okay and so was the baby. And Maggie realized something in all the relief.

Maggie realized that she may try and try to make things up to her daughter but there’s no telling how her daughter will react. Katie had been so concerned for her own mother that she told her mom she would much rather keep her than the baby and so there was hope for their relationship. There just wasn’t hope for Choi and Halstead’s friendship. The two were more at odds than ever and Choi didn’t care that he had been wrong about the experimental drug.

Manning and Charles meanwhile helped Brian to realize he was abusing his wife in his sleep. He was arrested but the police said that was a formality and that odds are he wouldn’t even get a record after this because it was clear he needed treatment for PTSD.

Manning later went home to have dinner with her boyfriend and Crockett introduced her to his Persian culture. His parents had changed his and his sister’s name so that they would have an easier time of it at school. But deep down, he’s still Daroush.