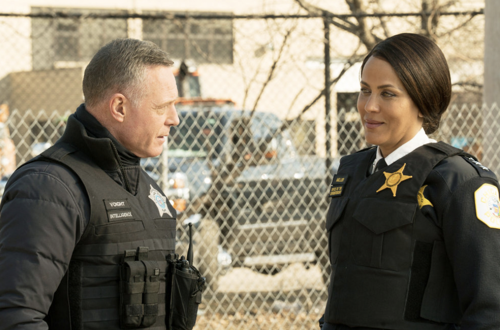 Tonight on NBC their drama Chicago PD returns with an all-new Wednesday, April 21, 2021, season 8 episode 12 called, “Due Process” and we have your Chicago PD recap below. In tonight’s Chicago PD season 8 episode 12 as per the NBC synopsis, “The team pursues a crafty serial rapist; Sergeant Voight finds himself resisting some old, familiar tendencies in his quest for justice.”

The episode begins with Captain Miller holding a press conference, she tells the media that change is not easy, but they are dedicated to transparency, rule of law and they will persevere. One reporter asks, five officers have recently been suspended or fired due to police misconduct, how is that progress. Miller responds you’ve just said it, they have been suspended or fired, we are paying attention and holding people accountable – they are part of a culture that will no longer be tolerated. Another report says that several violent offenders have recently been exonerated, murderers and rapists, what does she say to the victims and their families. Miller says that justice will prevail.

Voight leaves the press conference and is in his car when he gets a call about a man shot, he responds, he is two blocks south. On the scene, Voight sees some other men around the victim and tells them to move. The victim says their driver shot him, told him to get out and he has his wife, he is driving a black Ford Fusion.

The victim’s name is Ben, the medics arrive to take care of him. Voight puts in a call about the vehicle, says the gunshot victim’s wife, Jessica Larson, is in the vehicle and appears to have been abducted. The team is all on-site and looking for clues. They find the vehicle and Atwater says the driver is Jonathan Eakin, born in 1989 and he has a record for drug possession. Voight tells them to find this guy.

Halstead and Upton see the vehicle, units all gather together and find the guy. They pull him over and tell him that they want to know about his pickup, Jessica Larson. He says she didn’t show, he can check his app. Voight tells them to bring him in.

At the station, Eakin’s story checks out, it wasn’t him. Burgess says she has video surveillance, it wasn’t a black Fusion, it was a black Honda. They pull the plates and find out the vehicle was stolen the day before, Luna Witt made the report and patrol recovered the vehicle.

Voight heads to where the car is and it was set on fire, doused with lighter fluid and it is empty.

They get a lead to head to a building nearby, Voight checks the front inside, Upton is checking near the stairwell when she calls Voight over, it is a recovery, not a rescue – Jessica Larson is dead.

Halstead says there are no fingerprints on the scene, they think the guy used a condom, she was raped. Ruzek pulls footage of where the Honda was stolen, there is no footage of the steal, but he notices a guy walking out of a Mini Mart a block away, it is Caleb Hoff, he just sued the city for twenty-five million for wrongful arrest for rape and murder.

Voight tells the team they are going to do this by the book, maybe Huff lives in the area and was just buying milk, but he doesn’t believe that. Voight shows Ben some photos of men, he points out Huff immediately and says he can’t forget how he was glaring at them. Ben is angry, he shouts at Voight, “my wife is dead because you let a monster go free.”

At the station, the team goes over all the information they have on Hoff. Miller walks in, she wants to have a press conference, Voight tells her that they are not there yet. They have no DNA and Ben had four scotch before he got into that car.

Voight goes to speak to the arresting officer in Hoff’s case, she says she spent eighteen months on the case. Voight mentions that he is a person of interest, but they don’t have any evidence. She goes to get her files and shows them, he was violent and abusive. Hoff used a condom, so there was no evidence, but he upped it from rape to murder.

She tells them to keep their eyes and ears open, Hoff is back at it and he won’t stop there. Upton tells her to stay strong.

Voight wants an update, Platt has something, a missing person. Rene Ferguson got into rideshare two hours ago and hasn’t been since. They tracked her phone and she called 911 two hours ago, we can hear her tell the driver that he is going the wrong way, then she screams. They tried to trace it, but it wasn’t connected long enough.

They get a call, an abandoned vehicle. When they get there, the vehicle is burned and Rene’s necklace is found inside by Ruzek. Atwater sees footprints, he and Burgess follow them. Burgess gets a lead on a red pickup, some guys in a warehouse nearby seen a man flee in one about twenty minutes ago. Voight tells them to round up patrol and start looking in the building nearby. It doesn’t take long to find Rene’s body, she is dead.

Miller shows up on the scene, Voight tells her it is the same MO as Hoff. She says Hoff is on the loose and reckless, they need to go public, Hoff is on a killing spree. He tells her she can play this close to the vest, they don’t need to mention Hoff right now, they are going to come down hard on her. And, the second she mentions his name, he is going to run. She tells him to do his job and bring him in before he kills again.

The second victim, Rene Ferguson, has DNA from skin cells under her fingernails and it matches Caleb Hoff. They pull a receipt from the car they found from a Mexican restaurant, looks like Caleb got a burrito before he abducted Rene.

Voight goes back to detective Martinez’s house, the one who worked on Caleb’s case. He tells her that he has the DNA found on Rene, she says she wasn’t lucky enough to get the DNA when she investigated. He shows her a photo of HOFF with a man outside the Mexican restaurant, she id’s him as Kenny Rose, Hoff’s meth dealer and he drives a red Ford pickup. This means Rose knew what Hoff was doing.

They find the red pick-up and Rose, but he runs and the team runs after him. Halstead catches Rose in the alleyway and puts handcuffs on him. Voight walks up to him and asks where Caleb Hoff is, Rose, says he doesn’t know who he is. Voight tells them to bring him in.

Voight is upset, he tells the team that he and Ruzek are going to talk to Rose and see if he will talk. Voight and Ruzek go into a room and Rose is there, he brings the bag of Meth in. Voight tells him that they can pretend they never found this Meth, but they need information. Voight says Hoff killed women. Rose asks for a lawyer. Voight puts on gloves, and he tells him that if he doesn’t cooperate, he is going to need a priest. Voight tells Ruzek to book him on possession. Voight stays behind and he takes a rake to the windshield of Rose’s truck. A man walks up and Voight tells him that it is time to walk away.

Burgess finds footage of Hoff getting on a train, she does some more digging and finds out where he got off – then she calls Voight and tells him. Voight tells her to run a name, Victor Silvano, he worked at a building near where Hoff got off on the train.

Voight heads to the building, he was only ten minutes away. He calls Halstead and tells him he is there, but he will wait on them. Voight gets out of the truck, he hears shots fired and the detective who worked on his case is there. Voight climbs the stairs and starts shooting when he sees Hoff, who has now run out of bullets.

Voight asks him to give him a reason why he shouldn’t shoot him, and Hoff jumps. Voight heads downstairs, there is a gun near Hoff and he tells him to reach for it, when he doesn’t, Voight kicks the gun away. Martinez is there, she shoots but missed Hoff, Voight tells her to go home. Upton and Halstead are on the scene, Voight says Hoff thought he could fly.

Later, Voight is with Miller and she tells him that Hoff claims that Martinez was on the scene, is there any truth to that, Voight tells her the truth is not her friend, she would stop asking questions. What matters a violent evil man is in custody.

Voight stops by to see Martinez, she says she is not going to do anything crazy, but she appreciates him stopping by. She said she devoted her life to being a cop and she did a lot of good things, took murderers and rapists off the street and it made her feel good. And now, she lost everything. The politicians and the press turned her into a monster and Hoff into a saint.