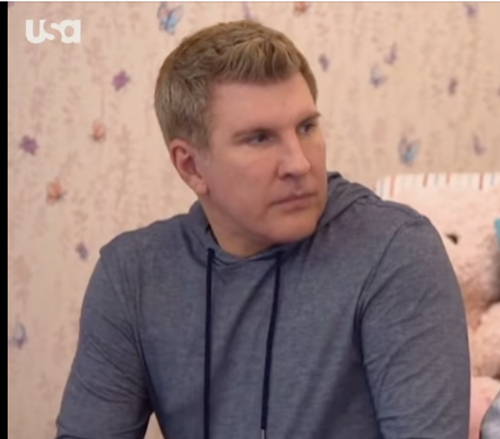 In tonight’s Chrisley Knows Best episode, Chase is always up to something. He recently tried to talk his grandmother Nanny Faye into doing ASMR videos and that’s when someone whispers a wonder over and over in a soothing manner. However, Chase should have known better than to rope in his grandmother. She doesn’t whisper. She yells and she kept doing that as they were filming and so that wrecked the project.

Chase had to drop it. He was forced to move on and it turns out he really should have been focusing on something else. His one-year anniversary with Emmy was coming up. Chase doesn’t actually remember his first date with Emmy and he was pretty confused. He went through his phone. He found a photo he thought might be from their first date and if it was then it meant his first anniversary with his girlfriend was literally the next day.

Chase was so lost that he turned to his father of all people. Again, he should have known better because his father told him to bs it and Todd said he should treat every day as his anniversary, and that way he’ll never get caught out. Only Chase didn’t want to do that. Chase thought he figured out when their anniversary was and truthfully he was only ninety percent sure.

He decided to take a risk with the remaining ten percent by putting something together. Chase was figuring out what to do as his father was going through hell with Chloe. Chloe had needed a new activity. She wanted to quit swimming and so Julie signed her up for karate lessons. The karate classes were parent and child karate lessons. And that meant Todd had to participate.

Todd didn’t know that beforehand. He went with Chloe to the karate lessons and he found out while he was there that he had to participate. He also found out he had to do it barefoot. Todd doesn’t do anything barefoot. He prefers to wear socks and so the karate teacher gave him the special karate socks which were truly like jockstraps for the feet. It left so much of his foot open. He had to walk on his heel and anyways he and Chloe both hated the lessons.

They thought it was too hard. They left early and got ice cream. Chloe later came clean to Julie about it. Julie got mad at Todd because she said they should support Chloe’s inactivity and he explained the shoeless policy at karate. Julie didn’t think it was bad while Todd thought it was the Vietnam War.

Todd hates going shoeless. He hates being without socks and he got Chloe hating it too because he explained to her how she was getting stinky toe jam all over her. Chloe now doesn’t like karate. She also doesn’t like swimming and so Julie thinks they should get to the bottom of why their daughter didn’t like swimming anymore. Chloe had decided to quit all of sudden.

She’s been doing it for a while and her quitting had come out of the blue. Todd and Julie later sat down with Chloe. They asked her why she really quit swimming and she said she did it because Todd said the Chrisleys are all great swimmers and she was afraid to disappoint by not being a good swimmer herself. Chloe’s parents explained to her that she was still learning and that eventually, she’ll become a great swimmer.

They also told her they’ll love her no matter what. She doesn’t have to be a great swimmer but she shouldn’t quit because she was afraid of disappointing them and so Chloe went back to swimming. Which Todd loved because it meant no more karate or parent/child lessons. Chase also solved his issue with his girlfriend Emmy. He and Emmy were both confused about their anniversary because he thought their anniversary was for their first date and she thought it was from their first kiss.