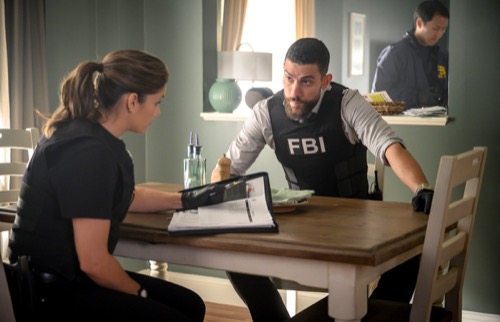 Tonight on CBS FBI Most Wanted airs with an all-new Tuesday, November 2, 2021 season 3 episode 5, “Unhinged,” and we have your FBI Most Wanted recap below. In tonight’s FBI season 3 episode 5 as per the CBS synopsis, “After a deadly fire at an arcade, the team discovers the blaze was just the first step in an intricate plan to exact revenge on one of the victims; Hana rejoins the team, finding new adjustments in all aspects of her life.”

In tonight’s FBI Most Wanted episode, Special Agent Hana Gibson is back. She left the team to take care of her mother because her mother’s cancer back and she hadn’t wanted to leave her alone during a pandemic. But her sister is stepping up now. Hana is free to come back to work and the moment she does she noticed that everything’s changed. Crosby isn’t there.

He was injured on the job and he’s back home healing. Hana’s roommate was in fact Crosby’s girlfriend and so she’s also losing her roommate because she wants to go to Oklahoma to be with Crosby. Hana is therefore without her best friend as well as her roommate. She also came back to the job to find out new girl Special Agent Kristin Gaines has been doing her job.

Hana was barely back a day when the team caught a case. The case pulled all of their focus because it was a multiple homicides case and it involved arson as well. The place that was torched was a family fun center. It had games and bowling. It was a place for families to hang out and have fun and someone torched it. They also went there with the intent purpose of killing the owner’s son.

The son’s name is William. William Duncan. William managed to survive the attempt on his life and he made it out of the burning building. William’s coworker and his coworker’s son hadn’t been as lucky. William was asked about that night. He remembered two people. He didn’t remember much else and so William was asked about enemies and he said his addiction might have been a factor.

William is a gambling addict. He started owing people money and so he took out a loan with a loan shark. William offered up the man’s name and the team looked into him. it was as they were doing research that something new cropped up in the case. The people that almost killed William weren’t the only ones after him. There was another guy there to kill him and he was mad about missing his chance.

This other guy also got to heart of what happened before the FBI did. The hired thug had found out the couple that targeted William had been paid by his father to burn down the family fun center so that they could collect insurance on it. The father wanted to pay back his son’s debts and arson was the best way to do it.

But no one was supposed to get hurt. The people that Fred Duncan hired had panicked when they saw the janitor and the janitor’s son and they killed them both. Which in turn implicated Fred in a double homicide. The thug meanwhile got closer to the suspects than the FBI did. He confirmed that Fred paid off these people who attacked his son and that Fred is in hiding. The thug went after him. Thee FBI meanwhile continued to investigate. They spoke with William and asked where his father was. He couldn’t say. They asked him who else might know and William couldn’t think of anyone because besides himself there was just his sister. The same sister that moved out when she was teenager and changed her name.

The FBI tracked down the sister. They asked her about her father and she said her father was the reason why she moved out. Her father had tried to rape one of her friends during a sleepover. Rachel tried to tell her mother about it and her mother turned a blind eye. So, that’s when Rachel moved out. She ran with a wild crowd and she went on to have a little girl. Her daughter is now thirteen and the team asked where she was because the young girl might be in trouble. The team went looking for the girl. She couldn’t be found and that might be a problem because they also learned something new about the man after Fred. Fred had raped and killed the thirteen year old daughter of the landscaper.

Only he never served time for the crime. Fred instead pinned it on someone who worked for him and that guy was sent to prison for thirty-five years. Angelo was just released two weeks ago. He came out of prison looking for revenge and he isn’t going to stop until he gets it. He kidnapped Fred. He kidnapped Fred’s granddaughter. His plan for them was so sick that no one could go though with it. Angelo wanted Fred to rape his own granddaughter. She’s thirteen like his other victims and so Angelo wanted to prove a point but he was stopped before the heinous act could occur. The FBI rescued both Fred and his granddaughter. And Angelo chose to die rather than go back to prison.

But the granddaughter heard Fred’s confession and so now he faces repercussions for all the murders he caused.