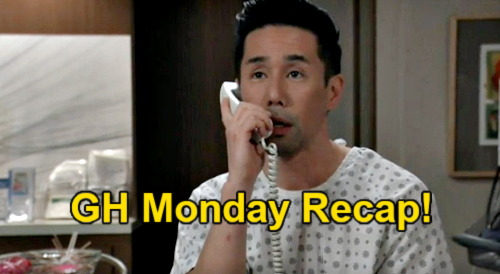 General Hospital (GH) spoilers recap for Monday, February 22, reveal that TJ Ashford (Tajh Bellow) showed up at the Justice of the Peace just in time for his domestic partnership ceremony with Molly Lansing-Davis (Haley Pullos).

TJ had Jordan Ashford (Briana Nicole Henry) in tow, and she was thrilled to be present for the ceremony. Both Molly and TJ happily signed the documents and became domestic partners.

At the hospital, Britt Westbourne (Kelly Thiebaud) and Jason Morgan (Steve Burton) delivered the Valentine’s Day gifts to the kids in pediatrics. Jason surmised that Britt wanted the kids not to feel so alone, since she knows what that feels like.

Elsewhere in the hospital, Michael Corinthos (Chad Duell) told Sasha Gilmore (Sofia Mattsson) that their date would have to wait, because Wiley Quartermaine Corinthos (Erik and Theo Olson) was at home being fussy. Sasha decided to go with Michael to the Quartermaine mansion to check on Wiley.

In Brad Cooper’s (Parry Shen) room, Brad called Lucas Jones (Matt Trudeau) and left a message saying that he was on the 10th floor and that perhaps Lucas could swing by and show him pictures of Wiley.

Jason and Britt finished delivering the Valentine’s gift to the kids, and they were standing in the hallway talking when a little girl came up to Jason and said, “Hey, mister, can I have a valentine?” Jason crouched down and gave the little girl her valentine’s bag in a very cute move.

Britt then went to Brad’s room and gave him a valentine’s bag as well.

At the Port Charles Grill, Ava Jerome Cassadine (Maura West) got a real present from Nikolas Cassadine (Marcus Coloma) – a beautiful bracelet. The waiter then brought a note to Ava that accompanied the roach gift that she got earlier.

The note was typed and said, “Secrets and cockroaches are the only two things that always survive…except for us.”

Ava and Nikolas thought for sure that the note and the roach came from Ryan Chamberlain (Jon Lindstrom), so Nikolas called Jordan, who was still at the Justice of the Peace.

Jordan reported that Ryan was still catatonic, and Ava surmised that perhaps Ryan had someone help him.

At another table, Willow Tait (Katelyn MacMullen) and Harrison Chase (Josh Swickard) finished their meal and enjoyed the wine that Willow had selected.

Willow talked about Michael and the renovations to the gate house, and then Chase suggested that they leave. “Where would you like to go?” Chase asked.

At the Q mansion, Michael and Sasha checked on Wiley, then they played chess together and talked about Sasha’s journey in recovery. Sasha wondered whether they could pick up where they left off, and Michael said that he had to learn to trust her again but that they could start over.

Michael and Sasha were about to kiss when Willow and Chase walked in the mansion.

Sasha ended up leaving, as did Chase, and Michael and Willow settled into the living room to watch a movie – “Love, Actually” – which Willow noted is the movie where everyone’s in love with the wrong person.

While Franco and Elizabeth attempted to celebrate their two-year wedding anniversary downstairs, Cameron was in the bathroom upstairs telling himself that he needed to do “this” for his brothers and that it was time to step up. Trina and Josslyn soon arrived, and Cameron asked them to help him shave his head.

Josslyn and Trina freaked out, but Cameron was insistent that he needed to do this to support Franco and to be a good big brother. Josslyn and Trina were eventually persuaded, and Josslyn took the shaver and gave Cameron a really close buzz cut. Tufts of hair fell to the floor as Cameron and Josslyn teared up.

The teens then went back downstairs, where Cameron unveiled his shaved hair to his mom and Franco. Elizabeth was shocked but proud of Cameron, and Franco looked genuinely touched by Cameron’s gesture.

At the club where Portia Robinson (Brooke Kerr) and Curtis Ashford (Donnell Turner) were on their stakeout, Portia and Curtis wrapped up their time together.

The outing seemed to do them both good, and Curtis told Portia that the club was actually for sale, and that maybe it was time for him to shake things up. Portia looked intrigued.

"The proof is out there." #GH pic.twitter.com/TheqphIl5x