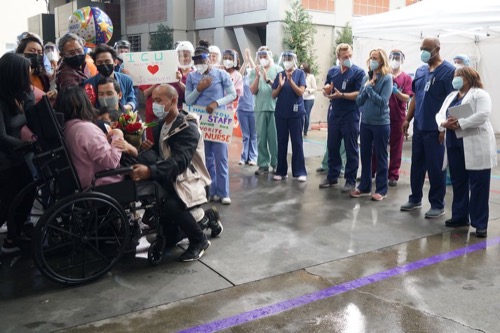 In tonight’s Grey’s Anatomy episode, Meredith fell back into a coma. She was still breathing on her own and so her health wasn’t as bad as before when she was on the ventilator. Her vitals are stable. But she was back at the beach. Meredith ran into Derek again and it’s always hard for her to leave him to return to the living world.

The two would get to talking. They would discuss the kids and Meredith would wonder if she had to return to them but she couldn’t leave Derek. She felt cheated when he died. They were supposed to grow old together and Meredith never truly recovered from his death. She’s tried to move on. She dated a few people and she still doesn’t love anyone as much as she loved him. It’s why Meredith kept returning to the beach. She returned because she wanted to see Derek again.

The outside world doesn’t know what’s going on in Meredith’s head. They don’t know that Meredith is with Derek because if they did then they would know how hard it is for her to rejoin them and they would be more worried than before. Meredith was back to sleeping as far as they knew. The doctors on her case were worried because they knew the longer that Meredith stayed in her coma, the harder it would be for her to wake up.

They also were worried about her organ health. The doctors were doing their best to make a health plan for Meredith while Jennilyn was being released. Jennilyn also works at the hospital. She also had COVID-19. She was at the hospital for six weeks and she was released recently.

Jennilyn was one of six people released from the COVID unit. The hospital put together a celebratory wall for her to pass by as she left and so there was hope in the pandemic. The doctors all did their best to see that every patient returned home but sadly that wasn’t always the case. They’ve lost people and they still don’t know the long-term effects of COVID.

It could cause lung damage or neurological issues. The doctors were getting new information about the disease every day and so they had to take each case day by day. It’s what the rest of the world was doing as well. Bailey met a middle-aged woman who quit her job as a tech lawyer and started selling peanut brittle. Erika said her old job made her unhappy. And she didn’t want to be unhappy if the world was going to end.

Erika also took up skating. She’s become very active in the pandemic and she had an accident on skates. She hit a railing. It’s now causing internal bleeding in her abdomen and so Bailey and Schmitt were doing their best to treat her. The two also got to talking. Schmitt thought Erika was brave. Bailey thought Erika was silly.

She could never give up her job. Especially now when she needs more surgeons than before and unfortunately she just kept losing surgeons. Jackson took a leave of absence. Jo also wanted to change specialties. Jo told Bailey this and Bailey told her “no”. She reminded Jo that she signed a contract as a General Surgery attendee. She also won’t let Jo out of the contract early and she didn’t care about Jo wanting to be happy.

Jo wanted to switch to obstetrics. She wanted to be around babies like Baby Luna who was improving by the way and right now Jo needs support. Schmitt supported her. Richard supported her. Even Meredith supported her. Meredith woke up from her coma for a brief few moments to help Jo and so the least Bailey could do was give Jo a chance.

Elsewhere in the hospital, Amelia and Link came in with their patient Felix. Felix began as Link’s patient. Link performed surgery on him and he still hasn’t recovered. He was complaining of his left side of his body being weaker than his right. Amelia overheard him talking to Link about his condition and so injected herself into the situation.

Amelia took over the teleconference. She asked Felix several questions and she later asked him to come to the hospital because she wanted him to be tested for a neurological issue. It turns out he did have a tumor on the brain. It was placed in a precarious position and one wrong move could paralyze him. Felix wants to become a baseball player. He was hoping to go to a Division 1 school on a baseball scholarship and so he really couldn’t be paralyzed.

Link first wanted Koracick to do the surgery because Amelia hasn’t operated since she went on maternity leave but Amelia ignored him and she booked an OR. It wasn’t until she was in the OR with the patient that she began having doubts. Link was watching her in the observatory and so he told her he was wrong. She did have this and she was a bada** surgeon.

Amelia had needed to do the superman pose, but it gave her confidence to perform surgery again and she wasn’t the only one performing surgery. Teddy returned to the OR as well. She performed surgery on Meredith to remove a clot that had made its way to Meredith’s organs and she did a great job. She removed the clot perfectly. It just wasn’t enough to wake up Meredith. Meredith was still in her coma.

Teddy freaked out when she saw no improvement and Owen was there for her. He was there as a friend. Teddy did try to kiss but that was just her falling on old messed up patterns and Owen wasn’t upset. He dismissed it and he still was there for her. The doctors had done everything possible to wake up Meredith and nothing was working.

It was Winston who had the bright idea of bringing Zola to the hospital. If Meredith could feel and hear her daughter, she might wake up. Winston and Richard both wanted to try this. Zola was in agreement with them. She wanted to see her mom. Maggie agreed to bring her to the hospital and they fitted Zola out with protective medical gear.

She was safe as she could be when she finally got to see her mom again. All it took was one hug for Zola to be happy. She was hugging her mom as Bailey had a change of heart. Bailey realized after talking to Erika that she shouldn’t stop someone from pursuing their dreams. And so Bailey agreed to let Jo changed specialties. And Jo later celebrated with Schmitt.

The same Schmitt that didn’t want to have an uncomfortable conversation with his boyfriend who asked him to move in with him.

Amelia went rushing back to the hospital when she heard that Maggie took Zola to see Meredith. Amelia had thought Meredith had woken up and so she burst into tears when she saw that wasn’t true.

But later Meredith did wake up to talk to her daughter.