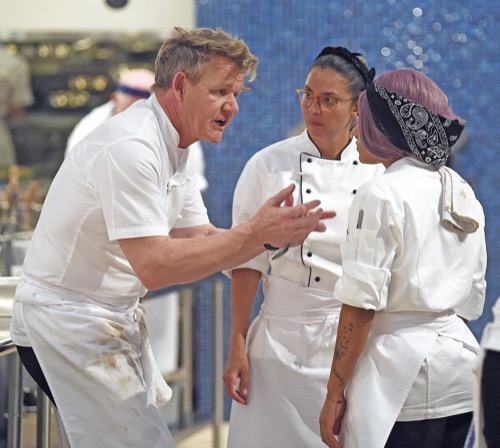 Tonight on FOX their Gordon Ramsay culinary competition series Hell’s Kitchen airs with an all-new Thursday, April 22, 2021, season 19 episode 16 finale and we have your Hell’s Kitchen recap below. On tonight’s Hell’s Kitchen season 19 episode 16 episode called, “Hitting The Jackpot,” as per the FOX synopsis, “The final two chefs compete in their most important cooking challenge, for a chance at the life-changing grand prize, including a Head Chef position at Gordon Ramsay HELL’S KITCHEN Lake Tahoe at Harvey’s Hotel and Casino and the title of HELL’S KITCHEN Season 19 winner

In tonight’s Hell’s Kitchen episode, the episode begins with seeing Kori return to the dorm with her finale team, she says she made it to the final two and she is to going home without a fight. She knows how to cook, she knows how to be organized and she knows how to lead a brigade. She is confident in her team, she goes over the menu with them. Mark is already starting, and Declan can’t stand being around him. Mark has a bad reputation on the line, Jordan is worried for Kori.

Mary Lou plans on going in, hitting hard, she’s the boss. She goes over the menu with her team. The only person she is worried about on her team is Lauren, she gets too caught up and wants the focus on her, and Mary Lou doesn’t need that. Cody loves to see Mary Lou like this, she is kicking ass and he is excited. Lauren is happy she is on apps, she thinks she has been put on the right spot.

Amber tells Kori that she is surprised that she picked Jordan before her; Kori hopes she realizes that it was a business decision. Amber approaches Kori and mentions it to her, then again and again – Amber can’t get over it.

The next morning, it is time to prep the kitchens for the most crucial dinner service of their lives. Kori is in beast mode and says her food is going to get her right through that famous winning door tonight. Chef Gordon is in the kitchen looking around, making sure everyone is on point. Mary Lou and Cody are flirting in the kitchen, he will do anything under the sun, in my power, under God, to make sure Mary Lou wins – he will make her proud. Amber makes a comment about Cody being very attentive in the kitchen because of his girlfriend.

Mark is already mixing up the kitchen, Kori is worried because he is not listening. She has a lot of faith and confidence in herself and if she has to move people out of a station or through them out of the kitchen, she doesn’t have a problem with that.

Mary Lou is worried about Aber, she’s asking a lot of questions. She has no doubt that Amber can cook, but she doesn’t want her to get nervous and mess up. Mary tells Christine, she knew she had to babysit Lauren, but she didn’t think she would have to do that with Amber.

It’s forty-five minutes before dinner service, Chef Gordon calls Mary Lou and Kori up to his office. He tells them that this is their final test to prove that they deserve the position of head chef. He gives them the finalist coat. He tells them it is their kitchen tonight, they are the head chefs.

They go out to the dining room and it is set with all the guests, including their families. Gordon introduces them. Mary Lou is making a very southern-inspired menu, a lot of things that are her mother’s favorite, it is an ode to her childhood and her mother. Kori cooks with her heart and soul, growing up in Mexico she has learned to cook with a lot of flavors, some of her dishes are her son’s favorite, her father’s favorite, so it is her on a plate. One of these ladies will be crowned season 19 champion and the head chef of Hells Kitchen Lake Tahoe.

Hells Kitchen is packed for the final showdown. On Mary Lou’s team, Lauren is already lost and Gordon says she is half asleep. Declan would give his left arm to be in the final two, but he will do his best to get Kori to win. Adam is already causing some problems in Kori’s kitchen, but he says she doesn’t have to worry about him doing something wrong. Then, he does something wrong, the head is missing from the shrimp. Both teams are moving on to entrees. Mary Lou is being very supportive of Mary Lou, and she says it is Kori’s loss. Gordon is upset when Amber forgets the chicken.

Mary Lou tells them to re-fire the whole table and she is frustrated that she has to micromanage. Jordan cooks the steak, one is medium and one is rare, Gordon catches it. Jordan is shutting down, she has to snap out of it and get back on track. Again, Kori’s steak is too rare. Gordon tells Kori to be smart, Declan is a better cook, put him on meat. Declan says have no fear, he is going to pull this back on track, and he does. Amber doesn’t look confident in cooking the chicken, she says she is not Houdini and can’t cook it faster than it cooks.

Gordon catches her chicken is raw. Mary Lou loses it, she shows them the chicken is raw, she has the same food out and has to throw it out because the chicken is not done a second time. Gordon takes Mary Lou aside, he tells her that Amber is a problem and she shouldn’t work with her. Mary Lou takes Amber off the chicken and puts Cody in place. Gordon speaks to Kori and Mary Lou, tells them that there were problems in both kitchens and he needs a strong finish.

Dinner service is over, Nikki thinks Mary Lou did an incredible job. Cody really wants Mary Lou to win, she is an amazing leader. Women who are great in their careers turn Cody on and it’s working with Mary Lou.

Gordon thanks the chefs for coming back and supporting Mary Lou and Kori. The customers are very happy, so Gordon has decided to get away with the whole door thing. He is going to make a decision now that is going to be important to both of them. He asks if both are ready, they say yes.

The winner of Hells Kitchen season 19 is a woman. Gordon starts laughing, Christine laughs and says they fell for it. Gordon says it is a big decision and he is not making it in five minutes. He asks for a moment with Mary Lou and Kori. He tells them that he is incredibly proud of them both, he will rely heavily on the cards. He tells them to head back to the dorms, he will call them when he makes his decision. The two head back to the couch in the dorm and cuddle together and smile. They both have nothing but good things to say to each other, they say they love and respect each other.

It is time, Kori and Mary Lou to meet Gordon upstairs, near the two doors. He tells Kori that she is an extraordinary young chef, her greatest skill is that she is a natural-born leader. Mary Lou has grown leaps and bounds, her attitude is unmatched and her confidence is building. He tells them to step up to their doors.

The winner of Hells Kitchen season 19 is Kori.

Gordon tells Mary Lou that she is amazing and her career is going to take off.