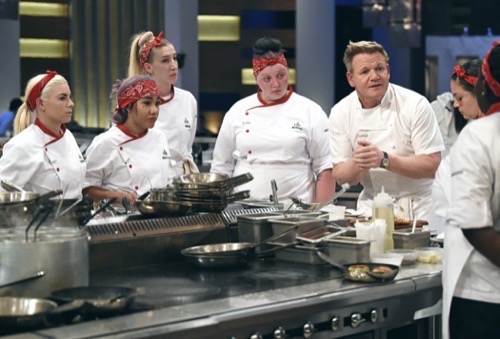 Tonight on FOX their Gordon Ramsay culinary competition series Hell’s Kitchen airs with an all-new Thursday, January 28, 2021, season 19 episode 4 and we have your Hell’s Kitchen recap below. On tonight’s Hell’s Kitchen season 19 episode 4 episode called, “Wedding Bells In Hell,” as per the FOX synopsis, “Chef Ramsay opens up Hell’s Kitchen to 15 lucky couples who will get married in the restaurant. The teams are tasked with preparing a post-wedding brunch for the couples, with the winning team getting a trip to Lake Tahoe to experience all that the location has to offer, including Gordon’s prize-winning restaurant, HELL’S KITCHEN Lake Tahoe, at Harvey’s Hotel and Casino.”

Chef Gordon Ramsay says he is tired of the BS and sends the red team back to the dorm. Nikki is so frustrated, she doesn’t think her team knows what she can do and they shouldn’t base her experience off her resume. Lauren says Amber is someone who is hard to get along with and can be a bitch sometimes, she brings bad energy and needs to stop.

While the chefs try to relax and unwind on the blue team, Drew is in pain, he is cramping all over. He feels weak and something is just not right so he sees a medic. Even though this is a dream that Drew has wanted for so long, he knows he has to get himself checked out, for his children. Drews return is uncertain and they are forced to start their day one team member short.

In the kitchen, the chefs enter and a wedding is going on. Gordon tells that Vegas is the wedding capital of the world and he has decided to open up Hells Kitchen to people who are celebrating their day. After the last marriage is performed, they will be presenting them a lovely brunch. Once their kitchens have completed and served all the guests, the first team to put on their cake topper will win the challenge. They have thirty minutes to prepare this wedding brunch. The chefs team work and communication will be tested.

Every table will receive a platter of avocado toast and fresh Mimosas. The entre is a choice of steak & eggs, eggs benedict or buttermilk waffles. The blue team are finally sending out their avocado toast and Mimosas. The red team, Jordan is strong but she is flustered. Jordan finally finds her stride and the newlyweds are enjoying their entrees.

Mary killed it on the steaks, while Amber is having a hard time on the egg station. The blue team is still waiting at the after for Josh s re-fire of the steaks. The biggest problem on the blue team is the steaks, Josh has done every technique except the one that Gordon Ramsay is looking for. It’s a race to the finish. Declan and Marc start to argue and their team mates tell them to calm down because they are in the kitchen and guests are watching them.

The red team finishes strong and win, and are going to Lake Tahoe. Firs they are taking a majestic snowmobile ride over the mountains, and a night full of surprises at Harrahs hotel and casino. The blue team’s punishment is not a piece of cake, it is six hundred cupcakes made from scratch.

Josh overmixes his cupcakes and has to redo several dozen. Meanwhile, the red team loves the good life and are at a loss for words over the spectacular spread prepared for them after their snowmobiling. The men didn’t think the punishment was this hard, they are eight hours into the cupcakes. The guys are finished the purple cupcakes and Josh puts all pearls on them, but there wasn’t supposed to be any, so they have to redo them.

The next day, the red and the blue teams are in the kitchen prepping for service. Gordon has them all line up and tells them that Drew is not 100% and he cannot return to the competition. Gordon decides to shake things up, he puts Amber on the blue team with the men. Amber looks upset, Declan asks her what is wrong and she says she is not into losing.

Gordon has invited Christina’s girlfriend, Martha Wasser and her family to sit at the red VIP table, along with Jason’s wife and best friends to dine at he blue VIP table. Peter send up the scallops, he was paying attention because he was nervous, and they are undercooked. In the red kitchen the women are hoping for a smoother start. Syann puts the flatbread in the oven, and when she takes out the first she drops it in the garbage can. The second one she sets on fire. Gordon demands to know what is happening and nobody says anything, he turns to Syann and asks her if she is trying to screw her team.

It took a team effort to get the flatbread right. Both teams are moving on to entrees. Gordon tries to call out an order, Marc talks over him and Gordon is furious. Declan says Marc should be a politician or a car salesman, not a chef. Brittani serves up raw salmon, after she brags that she can cook anything. Declan serves up meet that is undercooked, it is actually raw. Gordon tells the blue team, one more mistake and they are leaving the kitchen. Gordon calls the red team to the front, more raw meet is served.

He throws out the red team and tells them to get out. A lot of women dropped the ball. Lauren has no idea who is going to go home, it can be anybody. Meanwhile, the last piece of Halibut given to Gordon is black. He tells them to also come up with two individuals that need to leave. The blue team think that Declan and Marc and two bulls, and they need to go up against each other.

The teams return to the kitchen in front of Gordon. The first nomination for the red team is Brittany and the second is Syann. The blue team it is Marc and Peter. Gordon calls all four forward.