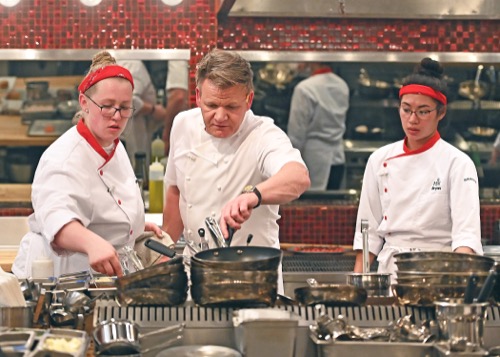 Tonight on FOX their Gordon Ramsay culinary competition series Hell’s Kitchen airs with an all-new Monday, June 14, 2021, season 20 episode 3 and we have your Hell’s Kitchen recap below. On tonight’s Hell’s Kitchen season 20 episode 3 episode called, “Young Guns: Come Hell Or High Water!,” as per the FOX synopsis, “The chefs are challenged to replicate the very first challenge in HELL’S KITCHEN history – breaking down squid perfectly for Chef Ramsay. Later, it’s “Chicken Gate” when Gordon discovers the Blue Team has served up raw chicken during Dinner Service.”

In tonight’s Hell’s Kitchen episode, after Matthew’s departure from the Blue Team, the Blue Team decided they were going to come back from their abysmal dinner service. The team promised to bounce back. They were going to cook like they never cook before and their challenge the next day was the perfect opportunity for this. Gordon Ramsay had brought back an oldie. He was going to ask the contestants to break a whole squid down and he even showed them how to do it.

The challenge was all about attention to detail. The contestants will have to go into the tank to collect the squid. There was a lifeguard on standby to help anyone who got in danger and so there was no reason why each contestant couldn’t find their own squid. They had to find one, clean it, cut it, and bring it to Ramsay for judging.

Ramsay is only collecting the first sixteen squids. He inspected every squid that came up and if it wasn’t perfect then the person had to go diving again for squid. Also, whoever delivered the perfect squid can also go diving again for another great squid and so the Red Team got lucky. Their first diver was Brynn.

She did everything right and then she was back going for more. She ended delivering three perfect squids in the same amount of time that her counterpart Antonio took to get one. The Red Team started off strong and they ended strong. They were later determined the winners of the challenge. With the Blue Team losing, Steve was asked if he wanted to use his Punishment Pass.

The pass would have gotten him out of the punishment. But Steve decided to hold onto it and so he wasn’t going trucking with the ladies. He was staying behind with the rest of his team as they broke down over a hundred pounds of seafood. This included squid, shrimps, and other fishy particles.

Steve ended up regretting pass on the trip. He stayed behind with the rest of his team and they had to listen to Antonio tried to assert himself as the leader. Antonio told them how they had to be perfect during their dinner service. He also said if they have any questions that now was the time and the other guys were mostly ignoring him because they blamed him for losing. Antonio had been the one against Brynn. He delivered one squid while she delivered three.

Then the Blue Team was served lunch. They were served a calamari sandwich and, after breaking it down all day, the Blue Team was so turned off fish that most of them vomited their lunch back up. Steve was the only one who enjoyed his lunch. Later, Ramsay added squid to the menu.

Both Blue and Red Teams each had a person serving table side and they were going to be cooking up squid ink pasta. The rest of the team will be cooking the other meals. The Red Team once again started off strong. They were the first team to deliver appetizers and the Blue Team was soon to follow. They had a false start at the beginning. The guy on scallops began cooking the scallops before the meal ticket could be read out and so that’s why it’s a false start.

The Blue Team also had an issue with the garnish station. It got so bad that Ramsay stepped in and told them to get their act together. He also had to later do it for the Red Team. The Red Team delivered the wrong item on the order and so they quickly did it over and delivered the correct items.

Ramsay had to again speak with the Blue Team. He asked them to speak back to him about what was up on the order and they were all over the place giving different answers. They had to say it a few times before they got the groove of it. Ramsay then waits for the Red Team and repeated what he did and they got it on the first go. So, the Red Team was once again proving to be stronger than the Blue Team.

The Blue Team continued to make mistakes. They were asked to give up a cooked chicken and Ramsay cut into the chicken only to find it raw. Ramsay was so furious that he pulled the Blue Team into the back where he could truly yell at them. He also threw the chicken at them. Ramsay asked them where’s the drive?

Where’s the dedication? One guy said “right here, baby” and that set off Ramsay because he’s no one baby. He’s the chef. Ramsay gave them another chance and still, they gave him the raw chicken breast. He was so angry that he kicked them out of the kitchen. They automatically lost this challenge and they’ll have to nominate two chefs to eliminate for the elimination ceremony.

The guys were arguing while the Red Team was delivering their last few dishes. The Blue Team had Antonio nominate himself and then walk it back when someone else nominated him as well. The Blue Team was such a horrible team that they were all responsible for what happened.

Ramsay ultimately had to walk away while more people were blamed for the chicken gate, but once he came back, he decided it was Jay who had to go because garnish was easier than meat.