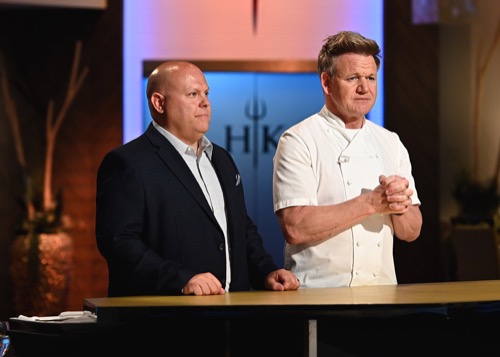 Tonight on FOX their Gordon Ramsay culinary competition series Hell’s Kitchen airs with an all-new Monday, August 30, 2021, season 20 episode 12 and we have your Hell’s Kitchen recap below. On tonight’s Hell’s Kitchen season 20 episode 12 episode called, “All Hell Breaks Loose” as per the FOX synopsis, “The competition is taken to a new level when the chefs have to prove they are worthy of a legendary Black Jacket. While some chefs quickly make the cut, others struggle to prove they have what it takes.”

In tonight’s Hell’s Kitchen episode, it’s a new day and new challenge. Chef Ramsay told the young guns that as chefs it was their job to turn ordinary ingredients into something spectacular and so he introduced a woman who did the same thing with her talent. She was a contortionist. She managed to fit herself into a balloon. She popped the balloon once she was inside and she was shown to be wearing a black jacket.

It was apparently time for the black jackets. Ramsay only had five jackets and there were seven contestants in all. To determine who got the jacket, Ramsay asked them to play his ingredient game. The contestants had to pull a giant slot machine and whatever ingredient they get they have to cook with.

Some of the contestants got ingredients they’ve never cooked before. Brynn got polenta and she doesn’t know how to cook it. She asked one of the sous chefs if it was like grits. They said it was and so that’s how she served it. Brynn last cooked grits when she was twelve. She was now twenty-one and had to operate purely on memory. Then there was Steve. He got the best protein and ingredients out of everyone.

He was super lucky but it turns out the ingredients weren’t the hard part. The hard part was plating. Kiya struggled with plating her dish and she didn’t get Ramsay when he said to the plate with finesse. She had no idea what finesse meant. Kiya refers to herself as a simple country girl and that she was in it to win it. And still, she wasn’t showing she could plate.

Kiya had to start over several times as she plated her dish. In the end, her dish tasted delicious and looked appealing but there was still one crucial mistake with her dish. There were mistakes with several dishes. Steve’s dish was overpowering with his peppers. Emily’s protein was overcooked. Megan’s dish was under-seasoned. Antonio’s plating looked like a murder scene.

Brynn’s dish lost some of the polenta flavors. Trenton’s dish was the best out of everyone. He was the first to be awarded a black jacket. The second person was Brynn. She and Trenton went to the Black jacket Lounge. They were served a buffet and there was an open bar. There was also some pampering. They were being treated great while everyone else was playing for the next black jacket.

The remaining contestants had to roll some dice to determine which ingredient they would be cooking with next. Ramsay chose their protein himself and all contestants will have to cook with the same ingredients. They also had to cook with bluefin tuna. Some of them have never cooked with tuna and so that was a new one. There was also an issue with the ingredients.

There was bell pepper, turnips, and even heirloom tomatoes. The ingredients were all over the place. Which was unfortunate for the young guns. They had forty-five minutes to cook their dishes and they all tried to be different. Emily’s dish looked depleted, and she knew it and so she cried as she was showing her dish off to Ramsay.

Kiya and Steve both had strong showings albeit Steve’s dish was cut a little too thin. Antonio’s dish didn’t quite live up to the grand scheme he tried to pull off. Megan’s rice didn’t quite pack a punch as much as her protein. Ramsay thought hard about this one. He decided to hand out a black jacket to Megan because what he did taste was amazing. He also handed out a black jacket to Kiya.

She may be a small-town girl but she was living the dream and she joined the others in the Black Jacket Lounge. There was one jacket left. There were three contestants left and so before they cooked their possible final dish – Ramsay showed them messages from home. Their families all wished them luck and now they have to put their heart on a plate in the final black jacket challenge.

They had forty-five minutes. They had free reign to cook a dish inspired by home and Emily decided to take risks. She chose to cook a T-bone steak. The black jackets watched the challenge as it was happening and they were concerned for her. They noticed she looked frazzled. They also posed the question that should have occurred to Emily. Has she ever cooked a T-bone steak before?

The black jackets thought she chose it to stand out and yet they watched as she struggled in the kitchen. They also watched as both Steve and Antonio cooked with confidence. Steve chose to cook grits because that’s something he was taught when he was young by his grandma. Antonio chose to cook enchiladas. it was inspired by his childhood and the only critique that Ramsay had for him was that it needed a little more seasoning.

The next person to eliminate was Antonio. It was a tough choice between him and Steve, but Ramsay chose Steve’s dish and so Steve received the final black jacket. He joined the others in the Black Jacket Lounge. Everyone had been hoping he would come in and so they were glad to see him and they welcomed him with hugs. The Final Five have been decided.