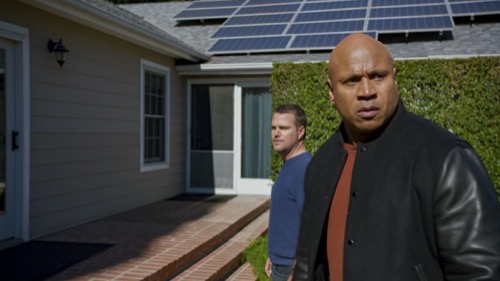 An old acquaintance becomes their prime suspect and reveals the true reason for her return. Also, Deeks struggles during training to become an official NCIS agent.”

Naima was working on her street game. She wasn’t really one for tough guy talk, but she’s been around the team for a while now and she noticed how well they all seemed to be good at it and so that encouraged her. She wants to be like them. She wants to be able to know what to say at any given moment. She talked about it with Rountree and he didn’t agree with her on upping her street game.

He thought that they as law enforcement should be above such things. He came to this realization after he took his sister and her friends out to dinner. The conversation soon turned to racial injustice and Rountree was quickly filled in on how he was on the wrong side of that argument. And so now he’s being more aware of what more he could to get the community to trust him as well as his friends.

Therefore, the smart quips or anything that wasn’t strictly professional was out. Rountree explained how he felt to Naima and she understood where he was coming from. Its just that she grew up watching tough guys with her dad. She watched as Walker Texas Ranger always knew what to say and so she’s taking inspiration from him rather than Rountree. Which is okay because they can agree to disagree. The two were later wrapped up in a case and so any other conversation was about that.

The team had been sought by their old friend Sabatino. Sabatino left the Middle East because he was asked to explain why terrorism was better funded now than it used to be and at first he was stumped. He said the kidnappings hadn’t gone up. The oil prices remained low. The terrorist just weren’t being their usual selves.

Then Sabatino came across six million dollars in counterfeit cash. The fakes were so good that Sabatino and his team hadn’t known they were fakes until they ran the serial numbers. Sabatino explained to the team that the terrorist were better funded because they were printing their own money nowadays. The super bills were mostly coming from Peru and a source on the income was a man named Michael Galeano.

Galeano used to work for the Acostas and then he got swept up in a raid. He was found by the Department of Justice. They held him in a secure house and were keeping tabs on him until one day someone found him dead at the house. Sabatino was notified by someone within the DOJ and it was clear they wanted his help in taking down the person responsible.

It turns out the DOJ knows who killed Galeano. It was Pietra Rey and the team recognized her name because they’ve had dealings with her. She’s tried to kill them. Callen and Sam were asked to become a part of Sabatino’s investigation into Rey and so they brought along their team. The whole unit investigated Rey. They found out she came into a country a few days ago and that she disappeared.

She wasn’t at the location given on her visa. She wasn’t even seen nearby and so she was in the wind. The team went looking for her, but they met with some resistance from the DOJ. It seems just one person from there had reached out to Sabatino. It wasn’t an authorized thing and so DOJ Deputy Chief Effie Carlson who was in charge of Organized Crime was leading the investigation.

Carlson didn’t want to work with NCIS. She threatened to pull their clearance if they interfered in her investigation and so the team was working behind her back to find Rey. Kensi even had a theory. Kensi knew Rey and she knew that she hates the Acostas for what happened to her family. There was no way Rey would be working for the Acostas now.

It also didn’t make sense why she would kill Galeano when he could inform on the Acosta family and help bring them down through legal means. Kensi brought up some good points about Rey. Only her friends chose to ignore it because it seemed too coincidental that Rey would enter a country less than a day before Galeano was assassinated. Sabatino wanted to continue their search of Rey and so they kept looking for her.

They eventually found her hiding out. Rey got the drop on them and she demanded why they were looking for her, but Callen and Sam were able to flip things and they arrested her. They brought her back to the boat shed. She questioned her on why she killed Galeano and she said it wasn’t her. She was actually in town because she was helping Galeano take down the Acostas.

She still hates the family. She wants to take them down more than anything and she has an alibi. She was with her DOJ boyfriend. She was also hiding at a DOJ house and right as the team were going to question the person who owns the house – the man was gunned down. The assassin was still in town and he or she was killing anyone connected to this case. And so the team went from arrest Rey to protecting her.

She could be the next person on the list after all. The team wanted to keep her safe and they didn’t tell Carlson where she was either. They instead told Carlson that she could question Rey if she was a little more open towards them about her investigation so far. The team was off doing that while Sabatino was guarding Rey and he used that chance to get her intel on the counterfeit money. Rey did know something. She said it wasn’t coming from Brazil and then she pretended to choke on her food. She wanted Sabatino to perform the Heimlich on her, but when he did, she knocked him out and tried to escape. Luckily, Sabatino knew she was going to do that. He warned Callen and so Callen stopped Rey from escaping.

Callen also informed her that her boyfriend was dead. Rey was shocked when she was told and that shock wore off really quick when she chose to escape. The team watched it happened. They let her escape because they figured she would find the Acostas’ death squad or the death squad would find her. They hid a tracker on her and this meant they didn’t live up to their deal with Carlson.

Then again neither did Carlson. She gave them footage from Agent Garcia’s murder and it was basically useless. It showed a white van. There were so many white vans in LA that Naima told Rountree that the piece of evidence was useless.

And Sabatino and Kensi followed what little information they did have into a seemingly abandoned building.