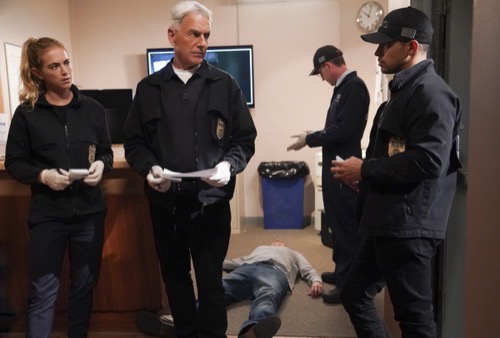 Tonight on CBS NCIS returns with an all-new Tuesday, January 19, 2021, season 18 episode 4 called, “Sunburn” and we have your weekly NCIS recap below. On tonight’s NCIS season 18 episode 4, “Sunburn,” as per the CBS synopsis, “McGee and his wife Delilah’s Bahamian vacation turns into a high-stakes mission; Gibbs fears the worst when his search for Fornell leads to blood.”

They realized instantly that something happened and so they tried talking to the Game Master through the security camera, but he was dead and the group got scared. They couldn’t solve all the clues while they were scared. They also couldn’t call for help because her phones had been taken and so they waited until the maid came. She found the body. She also freed the group.

The maid called 911. The police arrived and they did a preliminary search on the victim in which they found out he was a Navy reservist. The Game Master was identified as Chief Petty Officer Norman Mason. Mason had a bunch of stuff in his office and it appeared as if he was looking to making his own escape. He owned and operated the Mystery Madhouse and yet he had travel plans because he had a go bag.

He also had several important documents in his office that shouldn’t have been in his possession. These documents were once deemed classified and so it’s a mystery how Mason came to own them. The team investigated that plus Mason’s death. They believed someone may have found out about his cache and killed him to stop him from using those documents.

This meant the team were looking for their killer and any potential buyers for documents. They checked Mason’s phone records. He was in constant contact with someone in the Bahamas and as luck would have it the team had someone already down there. McGee was in the Bahamas. He was there on vacation with his wife Delilah and this was the first time they had gotten away as just the two of them. They left the kids stateside.

Their vacation was supposed to be about them and relaxing, but the team called and McGee couldn’t refuse them. He talked to his wife and she agreed he could run down the lead. He went to the payphone that Mason used to call and he waited for someone to show up.

A woman eventually did. She was a blonde and she looked harmless. She looked like she was vacation down there. McGee didn’t think she would be a problem so he approached her as a federal agent and she beat him up before escaping. She left McGee on the floor in the sand. His wife had been there and she checked up on him. Only he was going to be fine. It was more his pride that was bruised than anything else and so he was able to call it in.

He informed Gibbs what happened. Gibbs told him to track down that beach bum and McGee agreed to do it. He later tried to put his wife on a plane heading back home except she refused to go. She wanted to help him with the case because working together meant they still get to spend time together and so McGee agreed to it.

McGee couldn’t have stopped Delilah if he tried. The two agreed to work together and they found a way to track down their suspect. She was on a rented moped. They went to the rental agency and McGee was recognized as an author. The woman who ran the shop was a big fan of his. She thought she was helping him research his next book and so she gave them the woman’s name and address.

The woman who attacked McGee was Sienna Michaels. McGee and his wife went to her house and they talked to her neighbors. They were told that Sienna is a British expat and that she was a nice person. The two let themselves into Sienna’s house and they ran into her as well as her gun. Sienna demanded to know why she was being followed. She threatened to kill McGee and his wife and so he told her how he was investigating the murder of Norman Mason.

Which came as a surprise for Sienna’s guest. Sienna was living with a man named Malcolm Lucas and he worked with Mason back in the states, but everyone thought Lucas was dead and so him showing up alive was downright shocking. Up to that point, the team began thinking that someone was picking off Mason’s team and that they even killed his boss. Malcom allegedly drowned while on vacation. His death was deemed suspicious because he was on the swim team in college and was therefore a great swimmer. It didn’t make sense that he would drown and a second member of his team would later be shot. And so finding Lucas alive and well was what helped the team finally put their case together.

It turns out Lucas had developed a weapon. A drone that thinks for itself. He created a lethal autonomous weapon called DeepRaven and that’s what Mason’s documents detailed. Mason had been working with Lucas to develop this weapon. They thought it would be used in mapping the ocean’s floor and once they realized that their boss planned on using it for something else – they staged Lucas’s death and Mason kept an eye on the project to make sure no one was coming close to finishing what they started.

Mason even called Lucas’s girlfriend everyday to tell her it was all clear. The two thought they got away with what they did and all the while someone found out. Someone learned that they were sitting on a weapon that could be sold and so he tried to kill anyone who stood in his or her way.

The team thought it was men’s boss. They brought him in for questioning and he revealed he found out someone had been selling DeepRaven on the dark web. He wanted in on the sale so he didn’t say anything about it before, but he doesn’t have the weapon and he didn’t kill Mason.

Whoever killed Mason had given him a rash because they were wearing suntan lotion hat was specially created down in the Bahamas and so either the killer came up from the Bahamas or was currently down there in the Bahamas. The team tried calling McGee and they couldn’t reach him because the island was facing tropical weather. And so Gibbs reached out to his old Marine buddy down there and luckily his friend Clarence saved the day.

Lucas’s girlfriend Sienna was their killer. She flew to DC on the day Mason died to kill him and she even murdered the third member of their team. Sienna did all of this because she wanted to sell DeepRaven to the highest bidder. Sienna wasn’t as noble as Lucas was and she shot him in the leg when he tried to stop her. She would have killed McGee and Delilah too, but that’s when Clarence showed and he took don Sienna. Sienna was arrested.

She was facing deportation because she wanted in the UK for bank fraud and Sienna wasn’t even her real name. Either way, she was going away for life and McGee decided to take a few more days off to finally go off-grid with his wife Delilah.